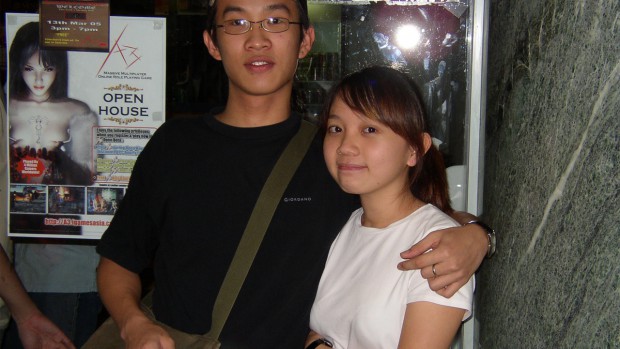 This article was originally written by Joan “REfusion” Chin.

I caught up with Amanda and Weiqiang after the World Cyber Games (WCG) 2005 Cybercafe Preliminaries at LanLab Online Ginza Plaza. Weiqiang, from Covert Ghost (cG), age 19, and his beloved girlfriend, Amanda, 18, have been a loving couple for one and a half years.

Amanda and Weiqiang met each other at their workplace and fell in love. They never didn’t want to reveal the name of the workplace, so I didn’t prompt further.

Amanda is not a gamer but she gives her full support and love by accompanying Weiqiang to his WCG Cybercafe Preliminaries round matches at LanLab Online Ginza Plaza.

Amanda told me that at first, she did not like him playing Counter-Strike as it hinders them meeting up regularly. She felt neglected. Now, from a brighter view, she gives all her support to him.

Amanda mostly accompanies Weiqiang for his clan trainings. From here, we can tell that love and concern can boost one’s power and skills. It is no wonder that Weiqiang can frag so well. Amanda’s appreciation for Weiqiang is really admirable. 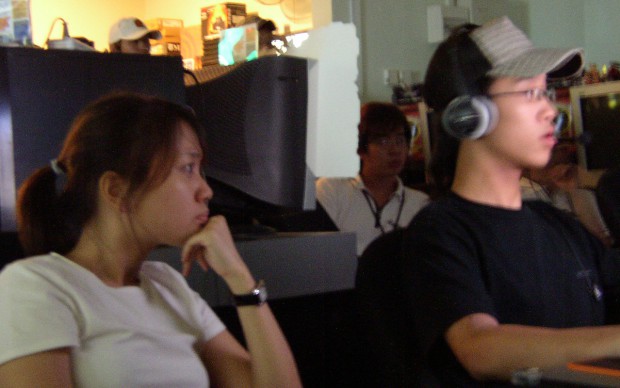 Amanda (left) watches on as Weiqiang plays his match.

When I asked about Weiqiang becoming a profession gamer, Amanda said it all depended on whether Weiqiang wants to be one. Weiqiang said that he wasn’t sure, but if the prize money was good he wouldn’t mind going professional.

So from here, Joan, aka REfusion, wishes Amanda and Weiqiang to be an everlasting couple on behalf of GameSync.

Can you introduce yourselves?

How did the both of you know each other?

We knew each other in a work place…… (silent)

Did you boyfriend introduce you to gaming? Are you a gamer also?

Amanda: My boyfriend did not introduce me to gaming and I don’t intend to be a gamer too.

What do you feel about your boyfriend playing cs?

Amanda: At first, I fetlt very neglected but after some time I no longer felt that way. I decided to give him support.

Do you accompany your boyfriend most of the time when he has his clan training?

Amanda: Yes I accompany him most of the time.

Do you want your boyfriend to be a professional gamer?

Amanda: I have no idea at all, it depends on him.
Weiqiang: At this moment, I’m not so sure but becoming professional gamer for the money I don’t mind.