And yet, never beyond my wildest expectations, could I imagine that an eroge like Fate/Stay Night would be one of the best video game stories I have ever played, far surpassing that of any Bioware blockbuster RPG.

This feature of Fate/Stay Night was based on the original Japanese PC game, with several fan-made patches applied.

Fate/Stay Night was originally released in Japan for the PC in 2004. This “original” PC version did not contain voice acting, and had significantly lesser “background effects”. The game was also completely Japanese.

Several fan-made patches were created to fuse the bonus features of the PS2 version into the original PC release, as well as to translate the Japanese text into English. These were the patches I used:

i) mirror moon English translation patch: Self-explanatory, but can be used in conjunction with patch ii) to enable voices on the original PC version

ii) Realta Nua voice patches for PC version: This is the patch I used to enable voices in the PC version, and I would highly recommend using it to enhance your Fate/Stay Night experience. Must be used in conjunction with the mirror moon English patch installer.

iii) Realta Nua PC enhancement patch: This patch adds bonus background images and effects from the PS2 version that were originally not found in the PC release. It also adds a bonus sixth ending, “Last Episode”, which can only be obtained once all the original five endings are unlocked. Again, a highly recommended patch to enhance your Fate/Stay Night experience.

iv) Fate/Stay Night uncensored patch: For those of us who hate mosaics.

A visual novel is essentially, an interactive comic book. There’s audio and animation to accompany the text and graphics, and you are able to influence the progress of the story through your choice of actions in the game.

Fate/Stay Night’s status screen reads like an RPG character sheet. It helps you to understand the abilities and powers of each character, updating itself with new information as the story progresses.

One reason for Fate/Stay Night’s success is because of its writer, Kinoku Nasu, who has a unique style of writing and storytelling. His prose is comprehensive and concise, describing everything in succinct detail — the character dialogue, the exchange of sword blows, the reminiscing of flashbacks and past memories. The lines of text appearing on screen grab hold of your attention, and compel you to continue clicking onward to find out what happens next.

All this is accompanied by top-notch voice acting and background music. The voice actors in the Fate/Stay Night visual novel are the same ones who did the voices for the 2006 anime. The CGs and background images aren’t fully static: The images are sometimes zoomed into, panned, and rotated, especially during battle sequences, which greatly enhances the immersion of the story. 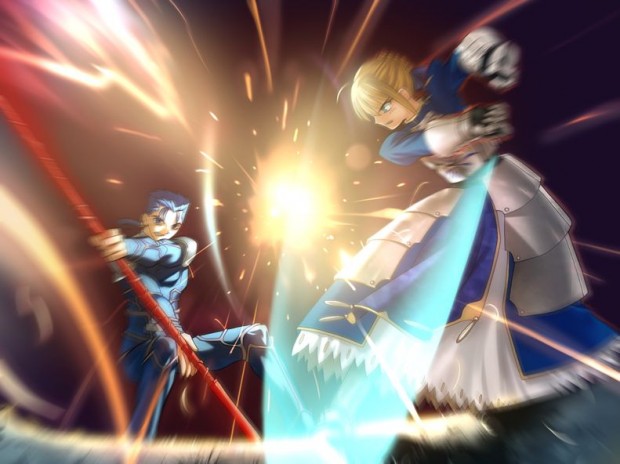 The fight scenes in Fate/Stay Night are tense and exhilirating, brought to life by the excellent prose and “animated” background effects.

The term “visual novel” doesn’t do Fate/Stay Night justice, this is more of an interactive visual movie.

The amount of research and historical knowledge put into the game is staggering. Fate/Stay Night borrows heavily from mythological folklore and ancient religious history, mashing them up together to form the game’s main central plot theme. As a player, one of the great immersions from playing Fate/Stay Night is trying to figure out the story and characters by yourself. There are many subtle hints thrown at you from time to time, and when the revelation is finally revealed, you marvel at the ingenuity of Nasu’s storytelling skills.

Andrew Ryan and Darth Revan can’t even compare to the magnitude of Fate/Stay Night’s plot twists. 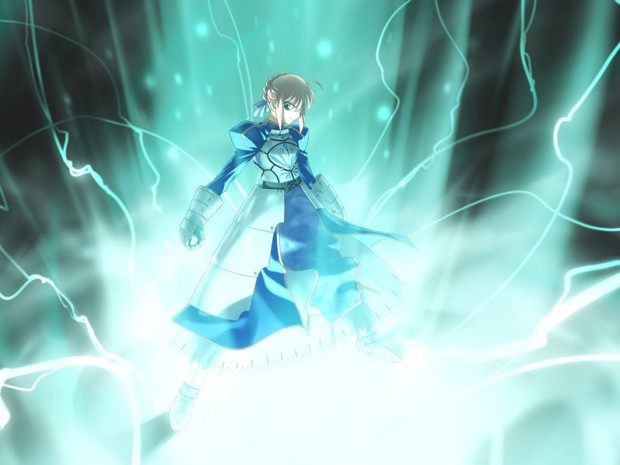 There are actually three seperate story paths, the first one being the “mandatory” path that has to be completed first before the second one is unlocked, and so forth:

Although all three paths are considered “separate” from each other and produce completely different endings and resolutions, the order of playing them is an intentional requirement on Nasu’s part: Each new story path builds on the previous one, showing different sides of the characters and giving all members of the Fate/Stay Night cast their chance to shine.

With three paths, it basically means that you have to play the game three times at minimum (five if you want to unlock the additional two alternate endings). It sounds like a daunting task, and it probably is: It took me over 70+ hours to finish all three stories, and there were times where I wished for the story to end quickly so that I could finish the game once and for all.

Thankfully, Fate/Stay Night has a scene-skipping function to give you the option of skipping text that you have already read before on a previous playthrough, as well as a fast-forward button to scroll through lines of text at an accelerated rate. These two features are handy for unlocking all five endings and acquiring all the Tiger Dojo stamps.

The Tiger Dojo is an in-game help corner that the player will encounter each time he reaches a “bad ending” (95% of the time, this means that you died). Entering the Tiger Dojo nets the player a “Tiger Stamp”, and there are 40 stamps in total to collect. Collecting all Tiger Stamps will unlock some entertaining bonuses.

It sounds depressing and masochistic, having to endure all 40 bad endings just to obtain some unlockables, but the Tiger Dojo is one of the best highlights of Fate/Stay Night — incredibly entertaining and utterly hilarious, the Dojo completely erases the negative mood from dying, and offers legitimately useful hints to assist the player in completing the story.

And you will be visiting the Dojo plenty of times, intentional or not, because death can occur in Fate/Stay Night at any time when you least expect it. The third path, Heavens Feel, contains several “delayed death” choices that will only occur about two to three hours after you have made the wrong choice. Knowing which path is the right one to take isn’t always immediately obvious, and you will be cursing “How was I supposed to know??” at yourself when you choose the wrong one. 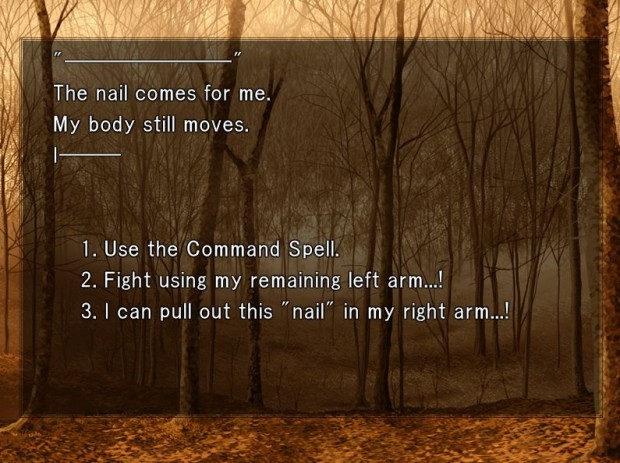 One of these choices leads to your immediate death. Making the correct decision isn’t as easy as it looks.

Once again, the scene-skipping feature is a God-send, allowing you to avoid the frustration of replaying the same scene over again. The game also has an outrageously generous 300 save slots — you are expected to save the game frequently at every choice dilemma, and reload from a save game if you made a wrong decision.

Over at the GameFAQs Fate/Stay Night forums, one gamer commented on how similar Fate/Stay Night was compared to Heavy Rain, an upcoming PS3 game developed by game designer David Cage and his company Quantic Dream. I share the exact same sentiments, as thoughts of “Heavy Rain” and “Fahrenheit” (another Quantic Dream game; in North America this game is known as Indigo Prophecy) kept popping up in my head as I was playing Fate/Stay Night.

Never has any other video game evoked so much emotion in me all at once — anger, passion, heartache, despair, disgust, intrigue, hilarity, bewilderment. It is easy to see why Fate/Stay Night has spawned so many spin-offs such as the aforementioned anime series, a fighting game, a novel prequel, and an upcoming animated feature film.

In a way, Fate/Stay Night is the prototype of what David Cage is trying to accomplish: An interactive and mesmerizing movie-like story that will stay etched in your gaming memory for years to come.

Not too bad for a Japanese visual novel eroge.

The Pros: An excellent story brought to life by the sum of all its parts: Voice acting, background effects, background music, written prose; scene-skipping and fast forward function; goodies to unlock.

The Cons: Death can occur suddenly and unexpectedly; the game is incredibly long for a visual novel and can be quite daunting to finish.

The Bottom Line: One of the best video game stories ever told. An emotional, suspenseful, and action-packed rollercoaster ride from start to finish. 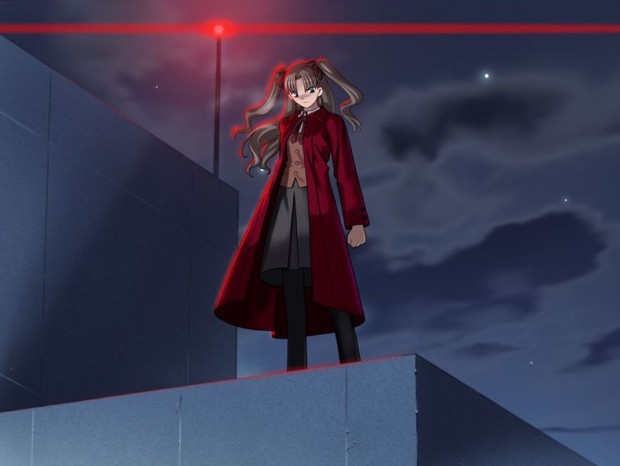 The author wishes to thank Kindaichi17, Neo32, and Doufoos for putting up with his Avalon jokes and spoilers in the A4D group chat. Big shoutout to Samuel Mok for convincing the author to play Fate/Stay Night, for which this feature would not have been possible.