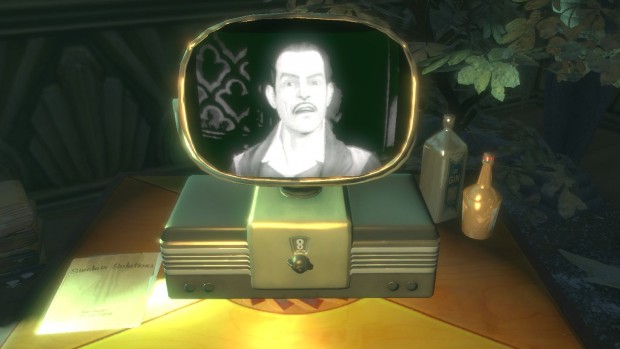 The original BioShock was a violent scavenger hunt set in a retro science-fiction setting, with a great video game plot twist thrown in the middle. It also contained a strong, objectivist subject matter based on the teachings of Russian philosopher Ayn Rand.

I hadn’t the faintest idea what objectivism was about after I completed the first game more than two years ago, and I just couldn’t be bothered. I simply consumed BioShock for what it was at face value: A violent scavenger hunt set in a retro science-fiction setting, with a great video game plot twist thrown in the middle.

BioShock 2 has somehow, succeeded where BioShock could not: It has made me stop to ponder about the underlying sociological themes of Rapture, as I suddenly find myself visiting the Wikipedia pages for Ayn Rand, objectivism, and collectivism. My experience sums it all up about the sequel: If you enjoyed your visit to Rapture the first time round, BioShock 2 is a game that stands on its own, building on the foundations of its predecessor.

Again, I’d like to emphasize the phrase “violent scavenger hunt”, because that is essentially what the gameplay for both games is about: Scrounging the game world for cash, ammo, and food; Searching every crate, drawer, and nook-and-cranny; Piecing together the chunks of story from audio diaries and graffiti scrawls. And every once in a while, you get into a massive firefight.

Plasmids and firearms are now wielded simultaneously, activated by a right and left click respectively. You can no longer pause the game to carefully switch to your next weapon. Hacking is now done in real-time. It’s almost as if 2K Games wanted to remove all unnecessary stoppages to combat, forcing you to stay immersed in the action, which is the true heart and soul of BioShock 2. 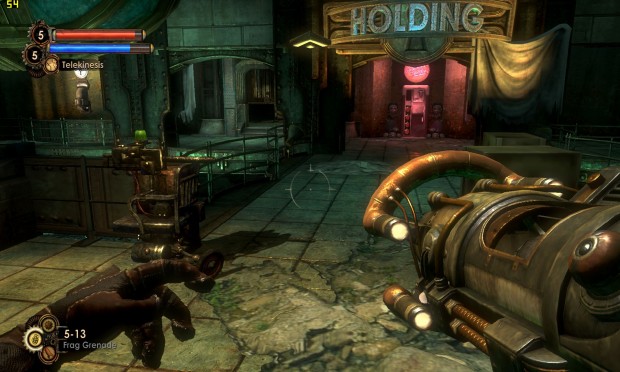 Isolated battles against Splicers still feel mundane. Enemies leave themselves exposed out in the open, and their predictable movement makes them irritating, rather than entertaining, to finish off. It’s only when you are thrust into the middle of a zerg-rush of Splicers that things start to get hectic. The sheer danger of threat in numbers, forces you to thin out the incoming horde quickly, or you’ll find your health dropping faster than you can replenish it.

There are many set-ups in the game where the zerg-rush mechanic comes into play. One of them occurs each time you deploy a Little Sister to gather ADAM from corpses, which attracts large groups of enemies to her location. You need to learn how to make use of the environment to survive. From setting up turrets at chokepoints; blocking long passageways with tripwires; or surrounding your Little Sister with a minefield of proximity grenades; your imagination is limited only by your creativity and the availability of the tools at your disposal.

The great aspect of BioShock 2’s combat is the sheer unpredictability of it all. Even the best laid traps can backfire horribly, as baddies start pouring in from a location you never expected. The dynamic placement of Splicers, coupled with the occasional re-spawning enemy at backtracked locations, keeps you on your toes. It also invites the player to experiment with the sequel’s expanded arsenal, from the straightforward Rivet Gun to the more exotic Insect Swarm. While there are some obvious, sure-win combinations (Incinerate and Heavy Rivets), everything has a useful purpose, tempting you to invent new and innovative ways to deal death in Rapture (Cyclone Trap plus Drill Smash, anyone?).

Of course, there’s also the signature showdowns against the Big Daddies and Big Sisters. The former has lost its status as a “boss” monster, easily defeated after you’ve acquired the proper ammo-type and plasmids. The new Big Sister is far deadlier – faster, more agile, and able to wield the same plasmids that you’ve been using. Although you’re given ample warning before her arrival, you’re never sure where she’s going to appear until the last minute, whereupon it becomes a dangerous duel of hide-and-seek. One of the endgame fights requires you to face-off against two Big Sisters at once – a truly terrifying and desperate battle for survival. 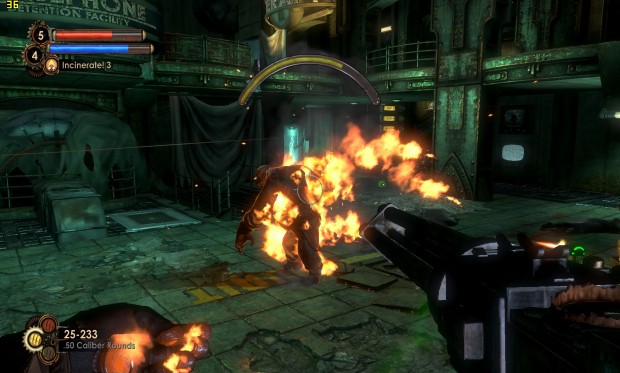 The PC version of BioShock 2 is plagued by a few technical issues, some of which are leftovers from the first game. The game engine is still unstable, producing frequent and unexpected crashes-to-desktop and lock-ups. Alt-tabbing is also a suicidal endeavor. Don’t try it. It’s absolutely mystifying how 2K has failed to address these problems two-and-a-half years after the BioShock’s release, leading me to believe that the PC version is getting the short end of the stick here – there’s no SDK or level editor included either, seriously limiting BioShock 2’s replay value. The multiplayer portion of the sequel is also implemented very poorly on the PC (see About Multiplayer).

BioShock 2 could easily be described as the Aliens of the series: it doesn’t attempt to re-enact the original’s aura of mystery and intrigue. The story is in fact, far simpler and more straightforward this time round: the sequel comes nowhere near to replicating the first game’s grand plot twist. Instead, you are plunged deep into the action first – whatever meaning or interpretation thereafter is left entirely up to the player’s own exploration.

Whether you treat it as a violent scavenger hunt, or as another narrative platform in understanding the different tenets of sociology, this second venture into Rapture feels the same, yet refreshingly different at the same time.

About Multiplayer
There are no dedicated game servers for the PC version of BioShock 2. All matches have to be organized via an in-game Games For Windows Live lobby, similar to Street Fighter IV or Dawn of War II. The lobby leader will end up being the server host for everyone else. In any online FPS match consisting of four or more opponents, this system could lead to potential lag and connection problems for players.

Unfortunately, after more than ten minutes of waiting in the lobby, I was unable to start a multiplayer game because I couldn’t find a single soul to play with. Either the multiplayer PC community for BioShock 2 has completely died down, or there is something very fundamentally broken with the GFWL lobby system. I am inclined to lean towards the former after taking this screeenshot: 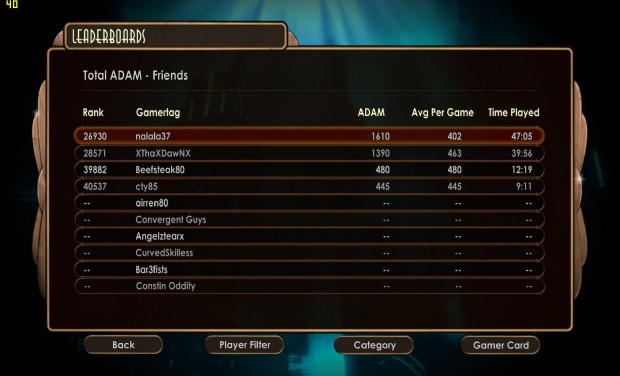 As you can see, the longest, overall duration spent playing BioShock 2 multiplayer by my GFWL friends was 47 minutes. Either the multiplayer portion is completely uninteresting (especially with other online-oriented games like Modern Warfare 2 and Bad Company 2 around), or BioShock 2’s matchmaking system is simply counter-productive for extended periods of play. Whatever the reason, if you decide to play BioShock 2, it’s definitely not for the online multiplayer.

The Good: Dynamic, challenging, and entertaining combat; an immersive game world that rewards exploration and patience.

The Bottom Line: Second time’s a charm. A decent sequel that stands on its own, and will appeal to fans who enjoyed the first game.

Rapture: We messed up, WCG SG will have over 8 games