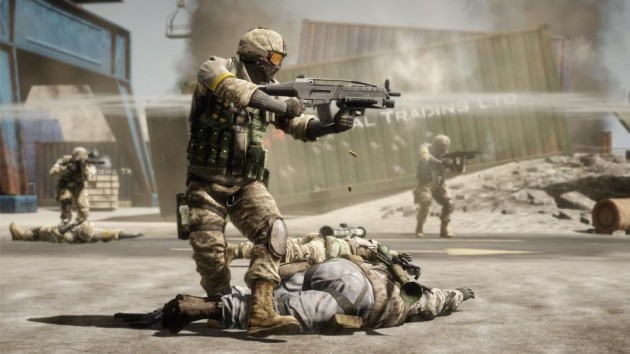 UPDATE (9 May 2010 6:17pm): DICE has announced the exact tweaks made to weapon balance in a follow up post to the original announcement. View them here.

Battlefield: Bad Company 2 developer DICE announced this morning that an update to the game will be rolled out “early next week”.

The Client R8 and Server R12 update promises to reduce game lag and latency and finally introduces a new chat system that allows chatting when dead and a chat log. While it is not clear what exactly this means, hopefully the new chat system will remove the frustration of dying mid-sentence and then not being able to review the conversation after spawning.

The update also fixes the annoying Combat Knife bug introduced in the previous patch, where knifing people in the back would not register. Weapons are also being tweaked, but no specific information has been released. My bet is that the damage on the AN-94 assault rifle will be reduced; it was already good, increasing its damage in the previous patch was just overkill.

What weapon balances and changes do you hope the next patch will bring? The full changelog is available for your reference after the jump.

Server – Some potential sources for lag/rubberbanding have been eliminated
Server – The old reserved slots has been replaced by a kick-on-demand system like in BF2
Server – Log file for server admins: all remote admin interface commands/events are logged
Server – Log file for server admins: major server events + all chat messages are logged
Server – Idle kick is controllable
Server – Profanity filter can be disabled
Server – Teamkill-kick system is controllable
Server – Ticket counts and bleed rate are controllable per-level
Server – Infantry only mode available per-level
Server – Initial spawn delay and respawn delay are adjustable
Server – Server description can be up to 400 characters, and use “|” for line breaks
Server – Banlist can contain up to 10.000 entries
Server – reduced latency in packet handling

Gameplay – Various minor level bugfixes
Gameplay – Helicopter handling has been tweaked
Gameplay – Weapon tweaks have been implemented based on PC public feedback
Gameplay – Fixed technical hang when a crate was armed outside of the combat area
Gameplay – “Victory is near” message was shown for the wrong team on Valparaíso, this has been fixed
Gameplay – Countermeasures can be fired when driving a helicopter
Gameplay – The brightness of the pilot view in the Russian helicopter has been reduced
Gameplay – Advanced Spotting scope works better
Gameplay – Knifing people in the back works again (we backed out the change that we had done for Server R11)

Client – Fixed DX9 issue, which likely caused graphics glitches and perhaps crashes
Client – Fixed some crashes
Client – Toggle/hold crouch is user controllable
Client – Toggle/hold zoom is user controllable
Client – Vsync bugfixed for DX10/DX11
Client – Rewritten how settings are written to disk; this should reduce/eliminate the spawn lag
Client – Fixed bug where a player could join a server before the stats has been downloaded causing faulty stats in “EOR- unlock progression”-screen
Client – New chat system allows chatting when dead (but not during end of round) and keeps a 100 lines log
Client – Improved Play Now functionality
Client – Removed K/D ratio and Skill Level filters in the leaderboards
Client – Any points you get while being dead will be added to your score
Client – Reduced negative mouse acceleration
Client – More informative disconnection/kick reasons

GameSync TF2 server now back and even better!