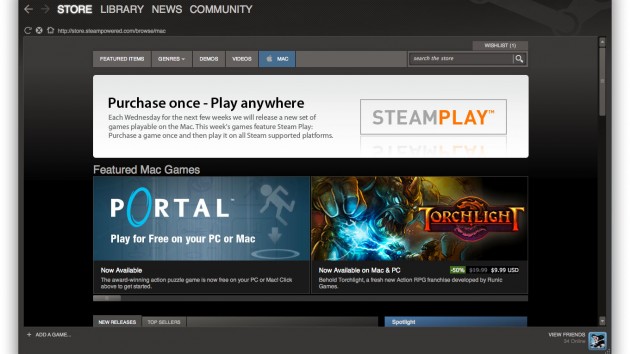 Steam has finally arrived on the Mac – but without Team Fortress 2 available for play. Valve released the Mac edition of its electronic games retail and distribution software for public download early this morning.

While finally being able to log onto Steam chat on the Mac is sweet, perhaps the best part about Steam for Mac is that you might not need to repurchase your games to play them on the Mac. As long as a game is Steam Play compatible, you can play it either on Windows or Mac – no additional purchase required. There are currently a total of 55 games available for the Mac, all of them Steam Play titles.

I’ve bought Braid and World of Goo through Steam long before Steam for Mac was announced, but now that both games are Steam Play titles, I can install and play them both natively on my Macbook. Braid isn’t retrieving my save game from the Steam Cloud service and I can’t get the Steam Community overlay to work but, otherwise, both games run flawlessly.

The real downer is that Team Fortress 2 is not yet available. (TF2 doesn’t even appear in the game library, but don’t panic! It will be there if you log into Steam on Windows. It’s not gone from your account.) I’ve been looking forward to catching a few games while I’m out of the house. No word from Valve on when TF2 for Mac will be released, but it too will be converted to a Steam Play title.

On the bright side, Portal is now available on the Mac and will be free to play until 24 May. Several Steam Play titles are also on discount at the moment. Torchlight is being offered at a 50% discount and there are great package deals, such as the Steam Play Indie Pack which includes And Yet It Moves, Galcon Fusion, Machinarium, Osmos and World of Goo for US$19.99.

Fragnetics and Starhub Steam up Singapore