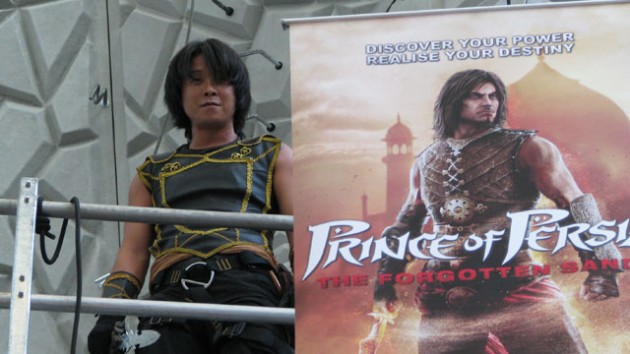 Last Friday, I was invited to attend the Prince of Persia: The Forgotten Sands launch event in Singapore. It was a small event held at Orchard Central, the highlight being the Prince of Persia himself (or, rather, a cosplayer named Andrew) abseiling down the rock climbing wall next to Geláre.

Well, enough about that.

I didn’t get a copy of the game to review, but did manage to put in some time at the demo kiosks. From what I’ve seen, The Forgotten Sands seems to be a throwback to The Sands of Time, focusing on jumping and acrobatic puzzles instead of the darker, grittier violence in the recent Prince games. You also get some new abilities to play with; solidify waterfalls and jumping off them is pretty darn cool. Take a look for yourself:

The PS3 and Xbox 360 editions are out now. The Windows edition will be released in June, but beware: it includes Ubisoft’s latest anti-piracy scheme which requires that you be connected to the Internet or otherwise be locked out from the game.