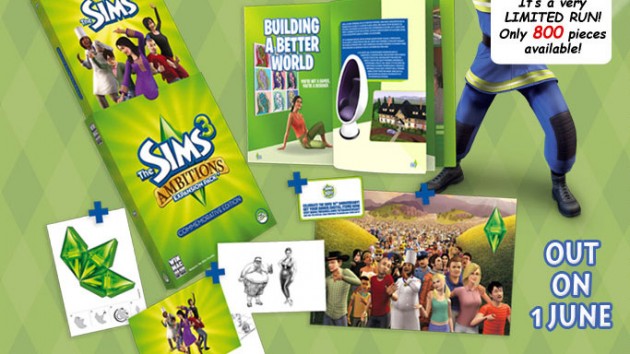 It seems like EA finally understands what a “limited edition” or “collector’s edition” game release should be like.

The Sims 3 Ambitions Commemorative Edition includes a 48-page hardcover book containing exclusive interviews of important people (I’m guessing these are the game developers) and the development history of The Sims. Seems like some concept art and sketches are included as well.

Besides actually including REAL content to this commemorative edition (not just some “exclusive” in-game digital content, mind you), the print run is limited to 800 copies. Will we finally see a “limited” edition that doesn’t end up sitting on the shelves months after its release? I certainly hope so.

I noticed that the limited edition of Battlefield: Bad Company 2, another EA title released earlier this year, is no longer available on shelves in Singapore and has been replaced by the standard edition instead.

This is a good trend that puts the “limited” back into limited editions releases and adds real value for those who pre-order or purchase a more expensive release of games. Let’s hope this is a trend that continues, not just with EA but with other game studios too.

The Sims 3 now open for pre-order