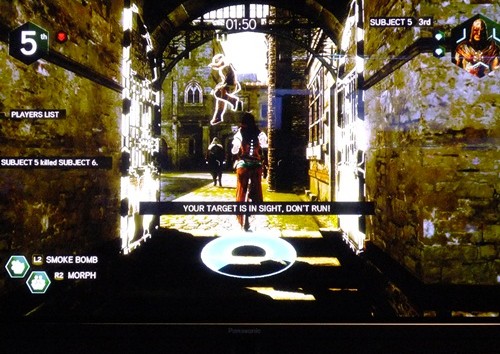 Gave the upcoming game a go and what do you know? It’s actually pretty fun.

The singleplayer mode takes a backseat this time round because the main feature of this new installment is the multiplayer experience which pits up to 8 players against each other in a game of assassination.

There is a range of class selections to choose from and each one gives a different special ability, such as smoke bombs for escaping from pursuers and cloning to change the character skin. Each round starts by assigning each player another player to assassinate and each player will be targeted by yet another player. So the player must go around hunting for his own target via a “hot and cold” radar while trying to avoid getting assassinated by his own pursuer. And no, you can’t murder your own pursuer.

There are two ways to kill your target. Stealth gives you the most points. To accomplish this, you must blend into the crowd and approach your unsuspecting target. NPCs don’t run, so the moment the player starts running, his target will be alerted. Same goes for the target.

A second way would be style killing. Perform a kill that’s fancily executed and you get bonus points for it. For example, instead of chasing down your opponent, you may launch an aerial drop kill on him instead.

If you manage to escape the sights of your pursuer for a short period of time, you are deemed to have successfully escaped and your pursuer will be assigned another player to kill. Voila, you get points for this too.

In the situation where the player gets hunted, game mechanisms called “Chase Breakers” may be activated to slow down the pursuers. These take the form of gates and doors that close behind the target. They are effective only to a certain extent since pursuers may quickly flip over the rooftops to continue the pursuit.

I never really liked the Assassin’s Creed franchise because it’s really monotonous and repetitive. With the introduction of the multiplayer mode, I actually found myself totally engrossed in the heat of excitement generated by the game. I even had a short period of paranoia among the E3 crowd after playing the game, as if someone in the crowd would suddenly drop from the heavens to stick a blade through my skull.