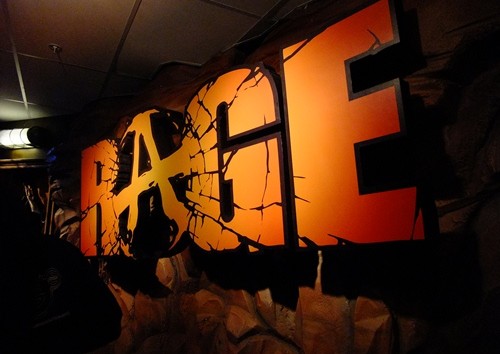 After a drought of ten long years, id Soft finally revealed gameplay for their newest upcoming IP, Rage. The spokesperson states that, “id Soft is set on alleviating the graphics and gameplay experience for first-person shooters. Rage runs on the brand new id Tech 5 engine which allows for dynamic texture painting for localised damage feedback. Blood gushes from gunshot wounds exactly where you shoot them. 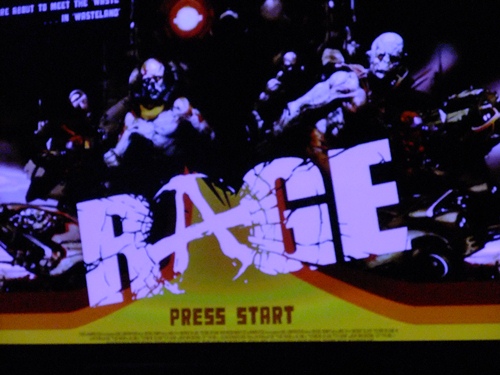 Cameras weren't allowed for the gameplay demonstration, so this is all I can offer. If I manage to receive the press kit, I'll upload all the screenshots available

The story of Rage is as follows:

An asteroid collides with Earth and the disaster wipes out a tonne of people. You are set in an apocalyptic world where you roam around the lands completing quests for NPCs. All this while, you are fighting against this omnipotent entity called the Authority which had been experimenting on mutants and unleashing them to run wild.

The spokesperson first introduced the press to an in-game place called “Wellspring”. This is where the protagonist stocks up on ammunition, sell/trade items, talk to NPCs for a better grasp on the world view, or participate in events such as racing and buying vehicle parts. It was confirmed that there would be vehicular battles ala Twisted Metal style and judging from the statements made, I believe a certain level of customisation would be allowed.

The quests shown during the demonstration seemed to hinge on the concept of clan extermination. For example, the first quest given was to get rid of a group of bandits named “Ghost Clan”. This is a bunch of thugs who have held the city water source as hostage. Depending on the clans you battle, you get to experience different combat styles. The “Ghost Clan” members like to do acrobatics while they attempt to slice you up. You see them hanging off ceilings and bouncing off walls before homing in for the kill.

A second clan, “The Wasted” is a gang of guys who specialise in vehicles and big guns. So in the process of hunting them down, they drive their trucks right into you while firing off a mounted machine gun.

A number of combat mechanics were shown. The first kill in the game was accomplished using some sort of a boomerang knife throw that decapitates enemy heads. A couple variations of rocket launchers were displayed along with a shotgun. There was also this cool crossbow that shoots electrically-charged rods. It was shown to be able to interact with the environment for kills. Shoot it into a pool of water and you shock all enemies in the water to death. What’s interesting though, was the usage of “engineering items.”

You get to use items like radio-controlled claymores,whereby a C4 is mounted on an RC car. You’d get to drive it into a room of unsuspecting villains and blow them apart. Other engineering items shown were a Grinder that grinds open advanced locks so that you don’t need to find a key, and a sentry gun. It was almost like Borderlands.

Nearing the end of the demonstration, the press was treated to a preview of the “Dead City”, a city overrun by the mutants. An enormous mutant appeared and started firing fireballs using a cannon. It was exactly like the fire cannon monster in Resistance: Fall of Man. The demonstration then ended with an even larger mutant that was almost the height of a building peaking over the rubble of a collapsed structure. The game just upgraded from Resistance to Shadow of the Colossus.

Rage will be released on the PC, PS3 and Xbox 360 sometime next year.