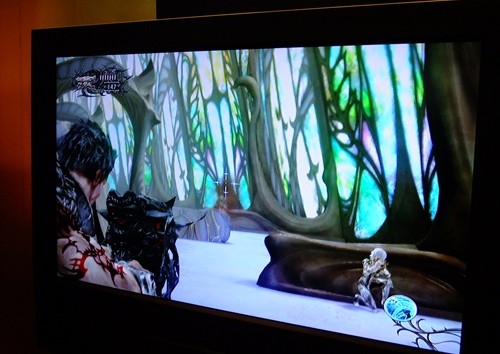 Quantum Theory’s gameplay was pretty monotonous. I hear some have compared it to Gears of War, since you could hide behind walls and peek out to sneak a quick shot at the enemies. Well, that’s just about all that you do.

I tried rushing up for a quick manly melee kill but was quickly taken down by a horde of manly bullets. All this while a scantily clad lady was dashing around me giving out obligatory caution warnings, while doing absolutely nothing. Despite the game description being a teamwork effort in pushing through enemy lines, the actual gameplay had me going solo anyway.

This Fillena lady was entirely clueless to her own existence. She’s like this pathetic little sister you drag along to an event only to make a fool of herself. As I was shooting enemies on the right, I expected the girl to fend on the left. Sure enough, she ran up to an enemy which was attempting to flank and kicked him. It was like kicking a wall, only this wall kicked her back. Thank you useless character who is lying motionless on the ground, now I have to shoot him myself.

I noticed an energy sphere charging up on the top left corner of the screen. I mashed around the buttons to find out that it was charging up for a special attack which I call “Throw the woman out”. Pressing the left trigger literally had me fling her into the enemy crowd. I’m assuming that since it’s a special attack, it’d probably boost her powers and have her mutilate everyone up front. The walls kicked her back again and my in game Syd character mumbled “Man she should totally fall back.” What.

Never mind the typically useless fillers, but the most irritating aspect of the game is the enemies actually heal. That’s uncool. I am hiding behind the walls to regain health because I am the main protagonist and I can. Damn, I had a whole hall of self-healing monsters releasing bullet hell on me. I figured this out when two shots to the head of a distant sniper wasn’t enough to take him out, and he managed to snipe my health to critical red. I hid for 5 seconds and shot him twice in the head again. This repeated for the next ten times. All this while 5 other maniacs were firing and flanking.

There were a tonne of different weapons to use too. That’s supposed to be a good thing. Until you realise you don’t really care about picking up weapons anymore. The items were practically raining from the heavens and you ca  only carry 3 at a time. Oh look, I can carry a rocket launcher but that grenade launcher looks more appealing. What about that shuriken launcher instead? After a while you just grab any gun since the magic of having a new weapon dies out 5 minutes into the game. Then you realise a new gun does nothing at all. And you’re out of ammo for the other ones. Look useless lady character, I am totally firing shotgun shells at an enemy hundred metres away!

To be released on the PS3 and 360 later this year, if anyone cares.