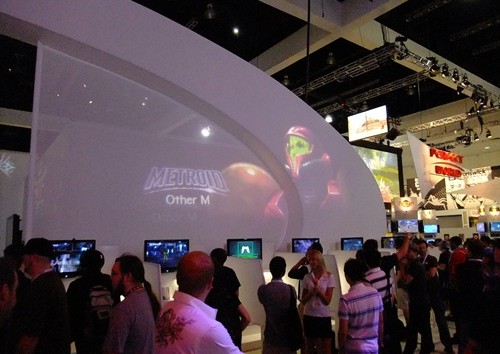 The new installment sticks to its side-scrolling roots and has the player controlling Samus jumping from platform to platform firing away at enemies while dodging traps. The game is controlled by holding the Wiimote sideways, proving once again that the Wiimote design is, on hindsight, a really flawed one. I mean, the Wii Samurai Warriors 3 booth had its demo played using the ergonomic normal controller instead.

Oh I’ll have a mini hands-on sub-review of Samurai Warriors 3 here while at it. It plays like your typical dynasty warriors, but the limitations on the graphics of the Wii made the special effects of the Musou powers look entirely nothing like that shown in the intro movie. Imagine Dynasty Warriors, now imagine it being boring and an eyesore. That’s Samurai Warriors 3.

Back to Metroid Other M, we than experience a boss battle with the side-scrolling gameplay quickly giving way to Ninja Gaiden styled boss fights. Players are to dodge the boss attacks with agility while quickly aiming at the weak spots for a clean shot. Maybe I’m a genius but I had no trouble defeating the boss, and it actually humoured me. I’d definitely recommend it to Wii owners for them to finally stack up on something that’s actually solidly fun and not a milking of an old Nintendo franchise. Oh.

That aside, what’s up with the story anyway? The intro movie has Samus waking up from a dream and the ensuing dialogue (“Blah blah blah awaits your delivery blah”) seemed to indicate that Samus is like pregnant. Her choice words of “my child” didn’t really help either. Not to mention that the abbreviation of Metroid Other M is MOM. Can a Metroid fan enlighten me here?