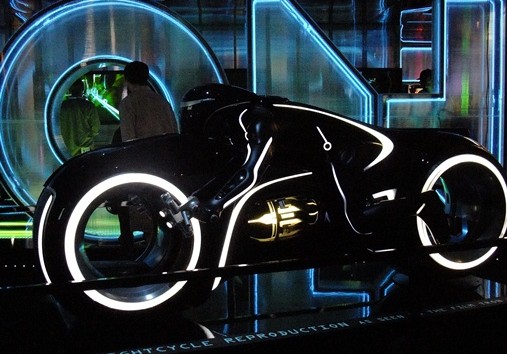 I had a go at both the Wii and PS3 versions of the upcoming Tron game and here are my thoughts: 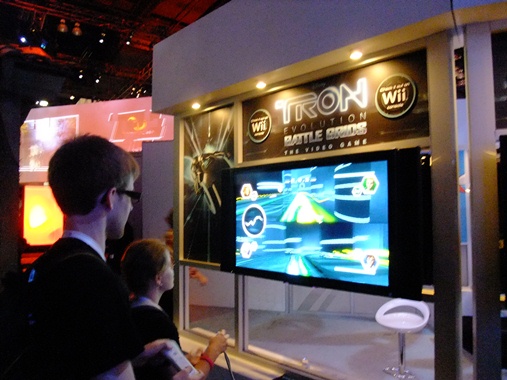 The Wii version is what I call an obligatory Wiimote game. I can’t ask much of the graphics but damn, the gameplay was really boring. Possibly limited by the specifications of the Wii, or just out of sheer laziness, the Wii version of Tron felt sloppily slapped together.

You control a Tron bike with your Wiimote held sideways as per any other Wii racing game. The character selection screen seemed to be trying too hard to look cool and turned out really cheesy. You pick a racer and race on the tracks of pixelated walls and physics.

After being taught by conventional racing games that take wheel traction, momentum and turn circle into consideration, the Wii Tron racing felt really… well, fake. Your bike travels at the same speed all the time, and occasionally seems to have a sonic boom boost but is really still just as slow. The turns are rigid and amateurishly accurate. What I meant by that is tilting the Wiimote causes the bike to turn at a fixed angle. It doesn’t skid, doesn’t slow down and does nothing else. Straighten the Wiimote and the bike goes perfectly straight from where you left it. The 90s just called, and they told me we could keep the game because they sure hope they have nothing to do with it.

Verdict, fun if you’re a kid. Totally unfun if you’re somewhere above a kid and the Wii implementation is tacky. 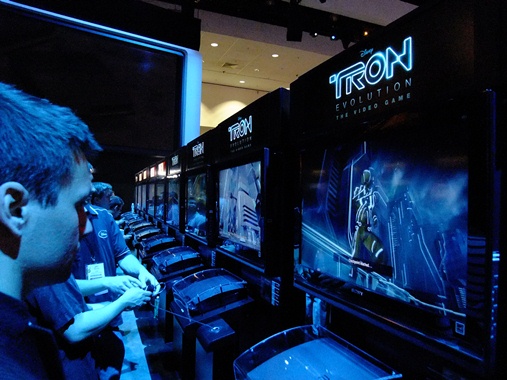 Firstly, the hack and slash, button mashing levels were kind of unintuitive when you start out. You move around the level parkour style, i.e. Mirror’s Edge. You can do wall run, wall climbs, wall jump, rail flips, and so on. These stunts were supposed to be fun, but they don’t always work all the time. To do a successful wall run, you have to run towards the wall at a 45 degree angle while holding down the action button. I spent a good embarrassing minute falling into the depths of the abyss trying to figure that out.

By instinct, I initially tried to do the wall run as per how I skilfully did it in Ninja Gaiden. Bam! Game Over.

Then I tried jumping towards the wall while holding down the action button. Bam! Game Over.

So after figuring out how to wall run, I used another minute falling off the rails because the instructions for rail flips were so obscure that I never paid attention to it.

However, after the basic movement controls have been mastered, the game actually manages to entertain for a while. I could flip over walls and do a slow-mo mid-air boomerang power burst. Or I could just charge up my attacks and slice through a crowd of enemies.

Then there are the racing levels. These are what the Wii version should’ve felt like. Conventional racing physics were in play and the bright neon bike was kind of cool. 2 minutes into the game, you’re lost. So, what was I supposed to do? Cut off the way for the neon orange racers so that they crash like in the movie, or am I supposed to dodge the randomly disappearing roads instead? You can try doing both, but it’s definitely not going to be a fun ride. The race was the most confusing thing I’ve ever played. It’s like a nerfed and dumbed down Blur.

A thing to note about both kinds of levels. You die like a mosquito. Your life in the game is worthless because it is so damn easy to perish. The developers seem to realise this problem and woah, they hack away at the problem by having save checkpoints every 30 seconds. That doesn’t make it any better, devs.

Verdict: This is as fun as any other movie tie-in game. You get my drift.

This game is to be released on the PC, PS3, Xbox 360, and Wii (dumbed down version) later this year.