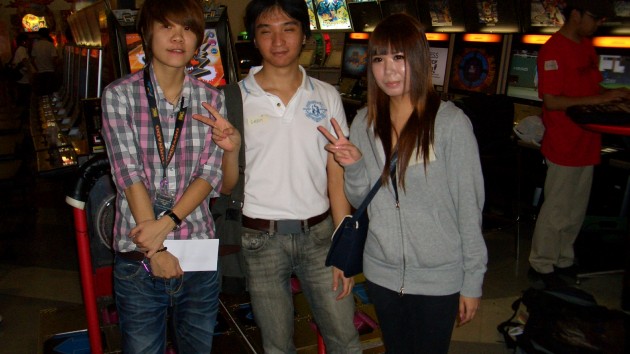 Evon and Leon defeated the team of Fuzz (using Noel) and xz (using Jin) in the finals to take home the top prize of $40 worth of Tornado vouchers.

Third place was obtained by the team of Daichi (using Arakune) and Haseo (using Bang).

Teams were assigned randomly for this tournament, encouraging members of the BlazBlue community to partner up with new faces. This format also gave the beginners a chance to progress if they were lucky enough to be paired with a pro.

“This random format can be a little bit unfair though,” Leon said after the competition. “It’s good if a noob is teamed up with a pro, but it’s also possible you’ll get a pro+pro or noob+noob team.”

Leon suggested the implementation of a seeding system, where the recognizably stronger players would be separated from each other and be forced to pair up with a beginner.

“We didn’t have a plan or strategy,” Evon said. “We just went out and played our best individually. I’ve seen my partner (Leon) before during the Calamity Trigger days but we never really talked to each other.”

Many of the BlazBlue community’s pro players and veterans of the previous BlazBlue: Calamity Trigger competitions decided to sit out on this tournament, volunteering as marshals and mentors instead to guide some of the newer players.

Teams who were knocked out of the competition were encouraged to attend the BlazBlue Clinic, which was being held at Iluma Bugis Level 7 inside the Colosseum LAN Centre. There, players could receive free tutorial sessions and advice on how to improve their game.

The next event to be organized by the BlazBlue community is a chalet at Downtown East on 17-19 September. You can view the full details here.

This writer registered for the tournament, then gave up his competition slot to someone else like the cowardly dog that he is. Another time folks.

On the right: Fuzz (using Noel). His partner xz (using Jin) vanished before the prize-giving ceremony.

In the middle: Fuzz. Flanked by the two tournament announcers.

BlazBlue 2vs2 tournament this Saturday (26 Sept) at Bugis Virtualand

Team LitChiChiBoy are BlazBlue 2vs2 champions