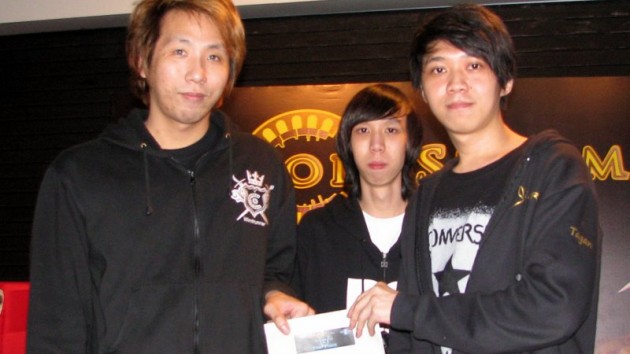 WarCraft III veteran Tagan Chua, playing under the nickname Jiaten, emerged champion of the Colosseum 1v1 StarCraft II tournament after defeating Kee-Chong “Lovestoned” Lee 2-1 in what turned out to be a protoss versus protoss final on Sunday night.

The two players made it to the top of the 24-player tournament after a four-group round robin stage and an eight-player single elimination playoff that began at 2pm and lasted almost six hours.

In the second match, Lovestoned switched strategies and built two Gateways in a forward location to catch Tagan off-guard and win the match with an early Zealot rush.

“From the first game, I knew I wasn’t fast enough for him. So in the second game, when I knew he was going Stalkers, I tried to Zealot rush him,” explained Lovestoned.

Lovestoned tried the same tactic again in the third match, but Tagan countered by building a Photon Cannon to stop Lovestoned’s Zealots and proceeded to win the match without further difficulty.

“Protoss versus Protoss is my weakest match up,” said Lovestoned, who also revealed that he was nervous early in the tournament. “At first I made a lot of mistakes, but after awhile I got used to it and the nervous feeling was gone.”