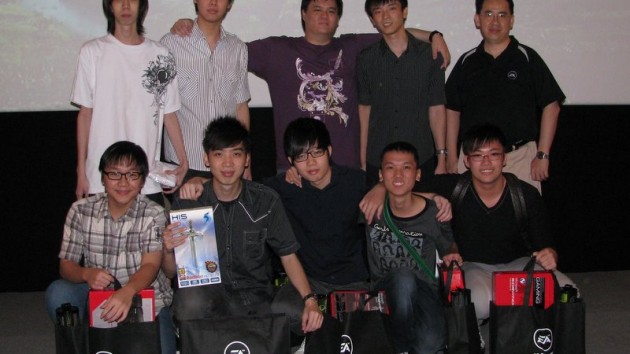 Champions BF.nut had a systematic training regime going into the tournament. Every week, the team would meet in person to discuss tactics and do some in-game training.

“We printed out maps which had grids for us to do our planning, and we did dry runs to make sure everyone knows their role,” BF.nut captain Donald “Gen3sis” Yeo said.

The rigorous training paid off when THAS put up a much stronger fight than BF.nut initially expected, with BF.nut falling back on their training and experience until they could find a breakthrough.

“It was a tough fight. We were playing on par (with THAS) for the first five to ten minutes until we discovered a loophole in their tactics,” said Gen3sis.  “We didn’t think they were good because we had never heard of them before.”

In contrast to BF.Nut, third-placed JEDI did not have the opportunity to train much and only did their team training sessions online.

“JEDI has been dormant for awhile, but when this competition showed up we thought ‘why not give it a try?’,” said JEDI team captain Philibert “DA” Santhanarj.

“Even though it was just eight teams, the bigger hitters like BF.Nut and MBT showed up. We had a mix of core guys that came from COD4, Battlefield and new players,” DA continued. “To get third place is quite good for a team that has only trained online.”

Fragnetics and Starhub Steam up Singapore