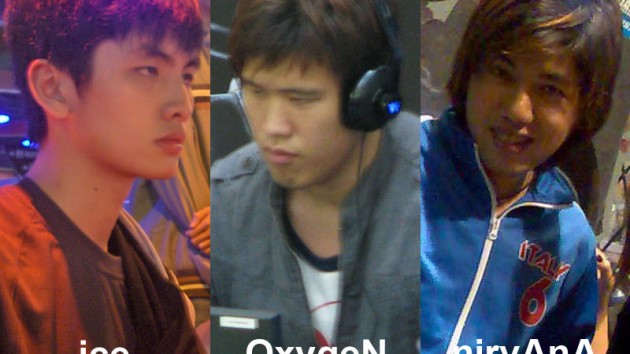 ice (playing zerg) lost the grand finals in two sets of 0-2, 0-2 straight losses to RedArchon (playing terran) despite earlier dealing a 2-0 second round defeat to RedArchon in the double-elimination tournament.

OxygeN finished third after being handed a 1-2 defeat in the lower bracket final by RedArchon, who had also eliminated Singapore favourite Bryan “nirvAnA” Choo in an earlier lower bracket match.

ice put down the vast difference in his performance during the grand final with RedArchon compared to their second round meeting to a lack of motivation.

“I would have probably played a lot better if (the tournament) was ‘first goes to BlizzCon and second gets shit’,” ice explained. “The first time (I met RedArchon) I had everything to lose. This time, I had only $1,000 to lose.

“It’s a lot of money to me but he (RedArchon) deserved it. I was playing real bad. I could have won the 6-pool games but I failed to block his marine, which I normally do.”

Despite this, ice promises to be more consistent when he competes at BlizzCon later this year: “I’m glad I’m going to Blizzcon. At Blizzcon I wanna be the best. I plan to win.”

OxygeN, relatively unknown outside of Singapore, surprised the SEA SC2 community when he defeated Australian favourites Legionnaire and GLaDe and top-ranked Singaporean nirvAnA on the way to his third placing.

“I’m very happy with how far I went, but I’m disappointed with my in-game performance in some key matches,” OxygeN said. “In the third match against RedArchon, I was just very disappointed with my banshee micro. I mismicro’ed and lost two of them for nothing to a marine-tank-viking-raven push which I was expecting.”

OxygeN had also used a number of aggressive, innovative and often controversial tactics which have resulted in him being criticised as a “cheese” player, or one who uses cheap tactics to win.

Responding to this, OxygeN said: “I think I’ll remain unfazed and its just a matter of hate me or love me. I’ll probably get called a cheesing noob a lot, till they accept that innovative styles are part of the game!”

“I’ve also seen some people come up to me and tell me that they love my aggressive play,” OxygeN continued. “People would probably start taking notice of me, but one thing is for sure: for every tournament, I’ll bring in a new playstyle!”

For nirvAnA, his last foray into a major tournament — nirvAnA has decided to retire from the competitive scene — ended on a less than happy note.

“I felt I played terrible,” said nirvAnA about his upper bracket match again OxygeN. “I should have won game two versus OxygeN. I didn’t use gravitional shield or forcefield the SCVs repairing his bunker. Not pressing those two buttons cost me US$1,000. I was just really tired and zombiefied and couldn’t sleep the night before. I was up like 40 hours.”

“RedArchon is really solid though, we are like 40-40 in total games. I’m not that mad at myself for losing to him cause it could have gone either way,” said nirvAnA about his lower bracket match against the Thai terran player.

“In the first game I made a silly mistake by not splitting up my forces enough. The thing with toss is they are so fragile, one mistake and its game over. In game two he (RedArchon) did a surprising strat, but I was well prepared for it.

“In game three he did a really nice secret expand at the top left. Really caught me off guard. I thought I was up an expo the whole game, then suddenly he moved out with a giant ball of units.”