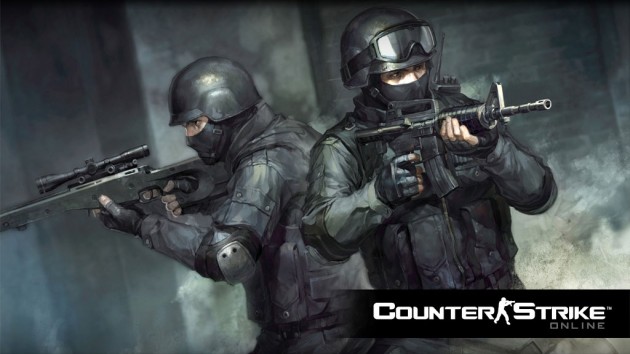 It’s been almost two weeks since the free-to-play first-person multiplayer shooter title Counter-Strike Online was launched in Singapore by IAH Games. For those of you who are still sitting on the fence about whether to play this game, here’s a quick overview and some insight from the producers of Counter-Strike Online.

For those who don’t know, Counter-Strike is Valve’s classic team-based first-person military shooter which pits a team of counter-terrorists against terrorists. Depending on the map, the CTs have to either rescue hostages, defend potential bomb sites or protect a VIP from being assassinated from the Ts. CS, also known as CS 1.6, is based on the Half-Life engine and can be purchased on Steam for US$9.99, or about S$14.

Counter-Strike Online, on the other hand, is developed by Korean game developer NEXON. with oversight by Valve, and published by IAH Games in Singapore as a free-to-play game. In CSO, Nexon changed very little from the basic formula that made CS popular – so you CS: Source haters out there can rest easy.

“The game engine is actually the same as before. We tried not to touch the gameplay and brought in all the good features from 1.6,” director of the CSO development team, Kim Dong-Sun, told me at a meeting with NEXON reps, organised by IAH Games last month.

Kwak Yong-Shin, the general producer of FPS games at NEXON, added: “The structure of the game itself is pretty much the same. What is different is the new content.” 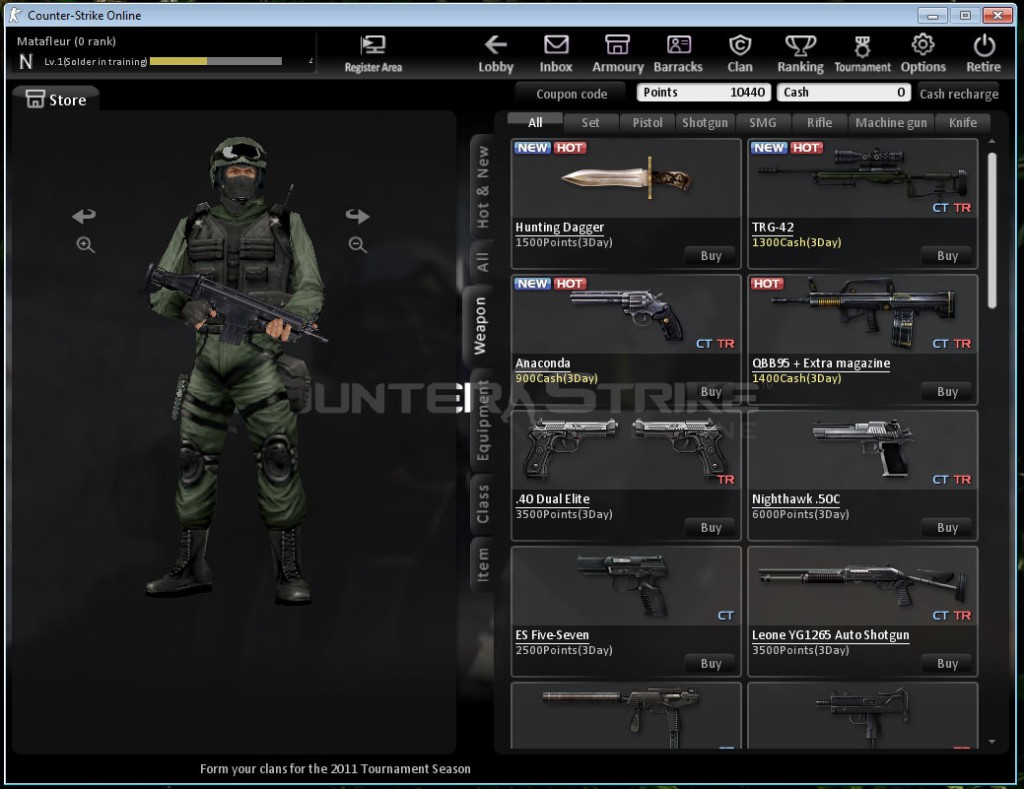 Well the most obvious change would be the item shop. Now, instead of getting the full selection of weapons and equipment available to you like CS 1.6, you start with some pistols, two sub machine guns (the TMP and MP5 for those who want to know), two new custom rifles – the SCAR for CTs and XM-8 for Ts… and nothing else.

If you want those other shiny guns, like the powerful AWP sniper rifle or the Desert Eagle pistol, you’ll need to buy them from the item shop. Thankfully, most weapons can be purchased with game points which you earn as you play. The downside is that they’re only available to you for a limited period, generally three days.

In general, you’ll only need to fork out your time to earn these weapons. The cash items are generally those which boost the amount of experience you earn, allowing you to level up faster.

Besides the item shop, there’s plenty for players who are new to CS, so there’s no need to be afraid of getting your ass kicked by hardcore players.

If you ever tried to play a knife fight in CS, you know it’s only a matter of time before some ass decides to bring his rifle to the party. CSO solves this problem neatly by integrating the ability to disable certain weapons directly into the game. You can choose to play with knives-only, pistols-only, sniper rifles only, or AWP only. You can also choose to forbid players from using the disorienting flashbangs. 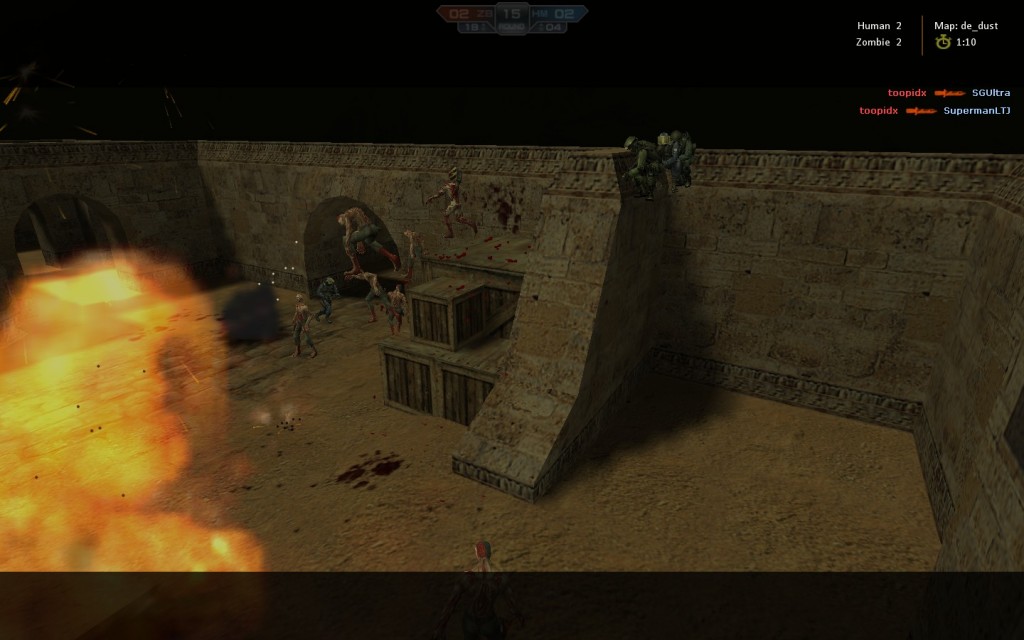 Humans hiding from zombies. Can you say, "LOL map exploit"?

But by far the most exciting content new to CSO would be the addition of three new game modes: deathmatch, team deathmatch and zombie mode. In the deathmatch modes, you spawn within seconds, ready to go again, instead of having to wait for the beginning of a new round before spawning again. You are also given a few seconds of invulnerability to prevent you from being killed before you can reorient yourself to your surroundings. Personally, I felt that the invulnerability period was a little too long; I kept getting killed by invulnerable players who spawned near me.

The deathmatch modes are a boon to those players who like an endless stream of action – especially when combined with the sniper rifles or AWP only modes. It’s pretty obvious how popular these modes are, since the deathmatch and team deathmatch modes appear to be the most played modes so far in CSO, with at least two to three games of 24 players each going on at most hours.

What’s interesting though is the completely new zombie mode. In this mode, a random player is selected to become a zombie. Zombies have an enormous amount of health and speed, and are able to kill human players in one hit. The twist is that as the humans get killed, they too become zombies. 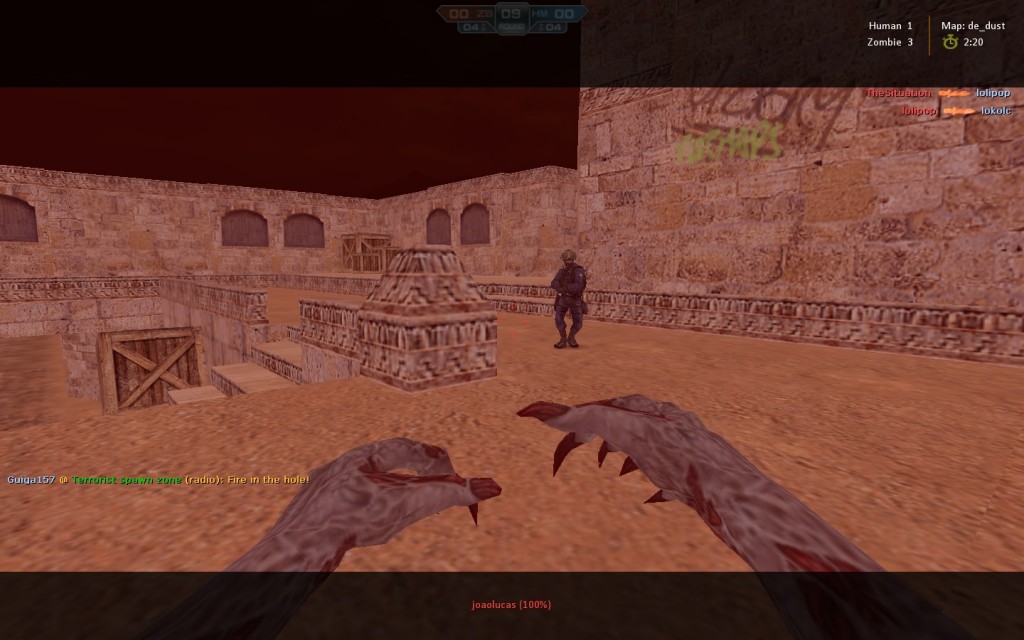 Poor CT about to be turned into a zombie...

Zombie mode games are very frantic, with the humans trying to hide behind natural chokepoints to prevent zombies from getting to them, or just trying to outrun zombies. As you can imagine, zombies win most of the time. One problem of the zombie mode is that, more often than not, it degenerates into human players attempting to use map exploits to reach areas of the map where zombies find it hard to reach. It’s still good fun though – just don’t expect a very balanced gameplay from this.

These new modes and settings are, of course, aimed at the casual player. As Kim Dong-Sun puts it: “The new modes will be more for casual gamers. Those users who like to enjoy the competitive game, they can enjoy the original mode.” 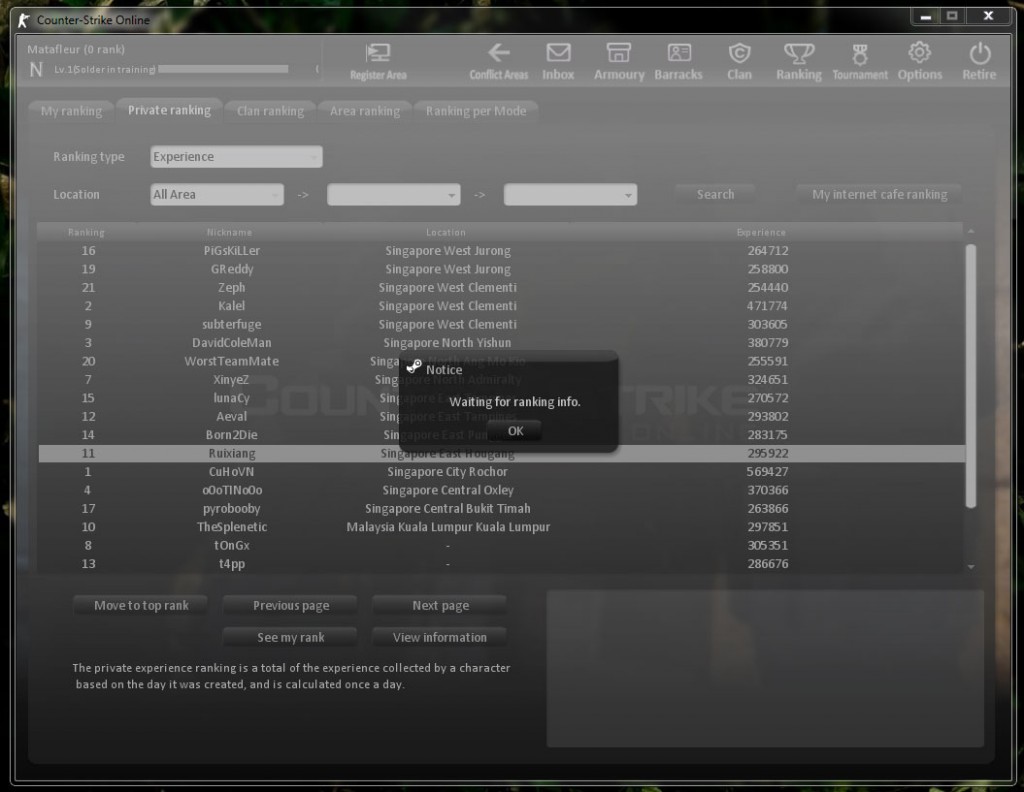 The leaderboard feature in CS Online

There are new features which are geared towards those who prefer the more competitive aspect of games. For one, there is a comprehensive ranking and leaderboard system in place, not just for individuals, but also for clans.

“There are three kinds of ranks,” Kim explains. “One is individual, which depends on the number of your kills and deaths. The second one is regional ranking – if you register your address the game will calculate how good you are in your region. And finally for clans, it will depend on clan matches.”

The regional ranking system is a curious one. While it’s well suited for Malaysia, which has many different towns, cities and states, it’s a little pointless for the tiny island of Singapore. You can select neighbourhoods like Jurong, Clementi, Ang Mo Kio, Yishun, or even obscure places like Oxley as your region. A little strange? I certainly think so. The different regions in Singapore are rather small, and even then not everywhere is covered – I noticed that Serangoon wasn’t included for example.

Apart from that minor nitpick, the leaderboards are a welcome addition that enhances the competitive aspect of CS – now you can know definitely how you compare to the other players in the game.

The clan management function is a very welcome addition to CSO as well. It’s pretty comprehensive – you can participate in official tournaments and even merge clans together with an item which can be purchased from the item store. The main advantage to having an integrated clan system is that you can not only see a list of all the clans in the game but also how they rank in relation to each other. That’s a big plus for those who are really into competitions. 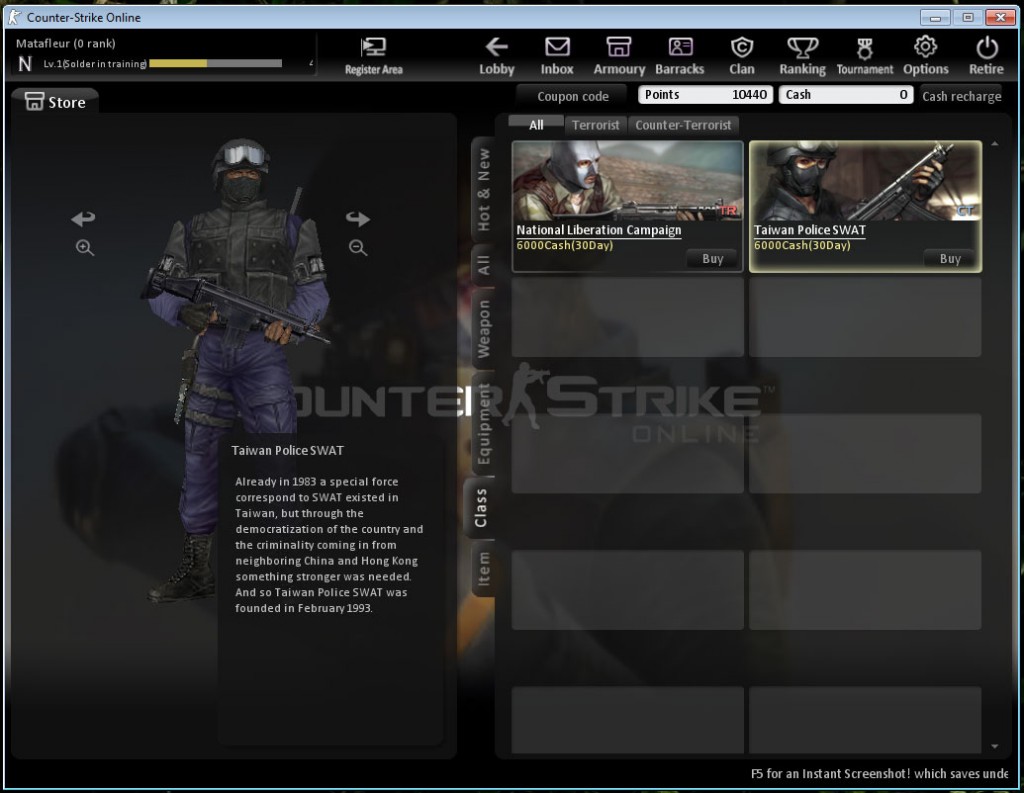 Besides the new game modes and the ranking system, there are also some superficial niceties added to the game. The latest patch which went live today added female player skins to the game, and there are skins for the Taiwanese police SWAT unit too. So will we see custom in-game content specific to Singapore, like some of our elite forces or perhaps even the SAR-21 rifle?

“Yes, it’s already been done,” IAH Games product manager Luke Cunico said. “We are working very closely with Nexon on items that are specific to our territory. The building of such game items, character skins, weapons and equipments have already been thoroughly brainstormed and we will be releasing them over a period next year.”

In fact, lead developer Kim Dong-Sun lets on that customisation to the game could go beyond even simple superficial changes such as new weapon or player skins. He said: “We are always willing to listen to gamers and their suggestions. If it is interesting and creative, we are really not opposed to bringing it into the game.”

That’s definitely something that’s good to hear. Developers that listen to their communities help keep the game alive in the long run.

Will Counter-Strike Online be a successful game, as successful as Blackshot has been in Singapore? It’s hard to tell at the moment. But with the familiar (albeit graphically aging) Counter-Strike game engine, the fun new game modes, and the slew of tournaments which IAH Games says it is planning for next year, it just might be able to make a splash. It’s certainly worth at least a try.

Overview of SEA teams in WCG07