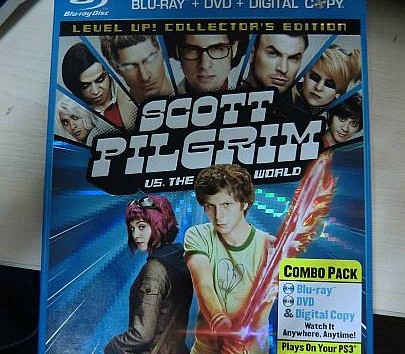 Foppy and Kilvear have finally managed to watch the Scott Pilgrim VS. The World movie on Blu-ray over the weekend. After months of waiting, starting way back in August with the delay of the theatrical release in Singapore (and its eventual cancellation), read on to find out how they feel about the film.

Foppy’s thoughts:
The original Scott Pilgrim comic books (by author Brian Lee O’Malley) were popular among gamers, because it parodied every aspect of gaming culture. In particular, old and obscure videogames from the 80s and early 90s were constantly referenced, catering to the inner, childhood nerds inside us gamers.

The premise of the film adaptation (directed by Edgar Wright) remains the same as the comic: Protagonist Scott Pilgrim (played by Michael Cera), has to defeat the seven evil exes of Ramona Flowers (played by Mary Elizabeth Winstead) in order to continue dating her. Along the way, both Scott and Ramona have to battle their inner demons and come to terms with their haunted past.

According to Kilvear, O’Malley wanted the movie’s ending to be different from the print version, and this is where the film really shines as it contains lots of neat surprises not found in the comic. Knives Chau (played by Ellen Wong) is given a more pivotal role in the movie. Certain orders of events in the comic are swapped around in the film, and some battles were completely reinvented (such as the Lucas Lee and Twins fight).

Purists of the comic books need not worry, however. The film still does its best to stay as faithful to the original source, in terms of dialogue and cinematic style. Many lines in the film are lifted verbatim from the comic — in printed form the original lines were already hilarious; on the big-screen it becomes an even greater form of entertainment. Some illustrations from the comic were also used to explain flashback events.

What I liked most overall was the incredibly spot-on performance of the entire cast. It was like watching a cosplay of the comic book. Kim (played by Allison Pill), Stephen (played by Mark Webber), Young Neil (played by Johnny Simmons), and Julie (played by Aubrey Plaza) were dead ringers of the original comic characters, right down to their hairstyles and clothes.

The exception, unfortunately, was Michael Cera. Scott’s character, for lack of better words, is that of an impulsive and fickle-headed asshole. Somehow, I could not feel Scott’s vibe of “assholiness” from Cera’s performance.

If there is another thing to nitpick about the film, it is that a few scenes from the comic were skipped entirely due to time constraints (as with most comic-to-movie adaptations). Knives’ father, Mr Chau, does not make an appearance at all. Kim and Envy, two critical characters for understanding the protagonist’s past, had their closures with Scott omitted from the movie.

Videogame-related movies have had a shaky history, culminating with this year’s ultimate disaster that was the King of Fighters movie. Scott Pilgrim, ladies and gentlemen, is the godsend that we gamers have been waiting for. Finally, a movie that affirms our gaming pastime. Produced by gaming geeks, for gaming geeks.

Kilvear’s thoughts:
I love the fact that they really stuck to the source material as much as possible. There are parts they switched around which I suppose makes it more interesting.

It probably also serves as a nod to the fact that the production crew are aware of the small details, but are unable to put it into the movie in the same way as the comic. After all, both formats are completely different beasts altogether.

Characters behaved like they would in the comic with some slight differences even down to what they wear. Although the movie bombed in US threatres, I appreciate somebody in Hollywood willing to cater this to us Nerds.

As for you guys, do what I do. Buy the DVD/Blu-ray, to show that we appreciate these types of movies. For those wondering about value, the package is well worth the SG$50 I spent. It contains both the DVD and Blu-ray version of the movie.

The Blu-ray disc packs so much stuff its insane. They even give you a digital copy for you to download into your iTouch/iPod/Zune, or whatever media player you have so you can watch it on the road.

The Good: An entertaining and near-faithful adaptation with its own surprises; Spot-on casting and acting by the majority of the cast.

The Bad: Michael Cera’s performance as Scott was poor; Movie felt rushed due to time constraints; A few critical scenes from the comic were omitted.

The Bottom Line: For everyone who has ever played and loved videogames, either casually or seriously, this is the movie you’ve been waiting to watch.

The authors, Edward “Glimmerous.Fop” Pang and Kelvin “Kilvear” Thor, watched the Blu-ray version of the film at a friend’s house. The Blu-ray was pre-ordered on Amazon.com by Kilvear for US$27.99 (SG$36), excluding shipping costs.

Both have bought and read all six volumes of the original comic book.

Professor Layton and the Eternal Diva is out in Singapore