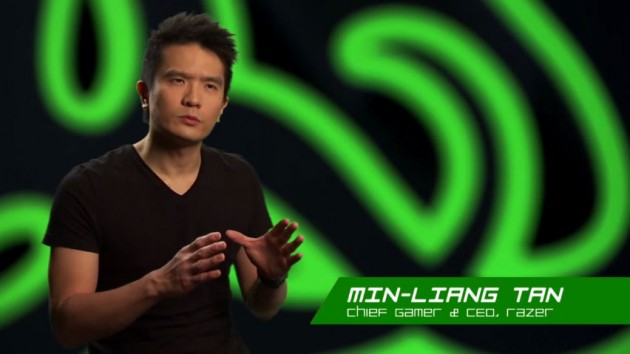 I put this up not because the Razer Switchblade is a cool concept in mobile PC gaming, but because it’s a rare opportunity to watch Singapore-born Razer CEO Tan Min-Liang speaking to us in person.

Listen for yourself and enjoy the coolness of the Switchblade:

The Switchblade is Razer’s attempt to bring traditional desktop gaming to a portable form factor. They’ve included a multi-touch screen to replace the typical laptop’s trackpad and have also put in a keyboard which dynamically changes the function and display of the keys — depending on the application or game — using tiny OLED screens in each key. The whole gig is powered by an Intel Atom processor.

It’s just a design concept at the moment, so there’s no release date or estimated price yet.

While the concept is undeniably cool, I have my reservations about whether it’s something that would work out in practice, at least as a gaming platform.

First on my mind, and something that more than one friend has shared with me, is that Razer’s build quality has not been spectacular of late. On a relatively cheap and easily replaceable device like a keyboard or mouse, that’s not so much of an issue. But a netbook is a much more complex device and has more points of failures than most Razer products. No one wants his or her netbook to breakdown with all that irreplaceable game data on board, let alone be unavailable for a few weeks while sent in for servicing.

Second, is that while the Switchblade might very well allow you to game on-the-go, the question remains of how long the battery will last while you game. The Optimus Maximus, a keyboard with OLED screens for keys like the Switchblade, requires the keyboard to be plugged into a wall socket because of the amount of power the OLED keys need. It’s certain that the Switchblade will be drawing much more power than your typical netbook for the same reason. Add that to the fact that games are some of the most power-hungry applications, and I predict you’ll see a very brief battery life for the Switchblade.

The last is a minor nitpick that’s not limited to the Switchblade, but how you are going to get connected to the Internet? Sure, you can plug in a 3G dongle, but I’ve tried that and the latency you get with the 3G networks in Singapore just don’t cut it for gaming. It’d be nice if the Switchblade included a built-in 3G modem though, as it fits with the whole “gaming on-the-go” concept, if not entirely practical.

What is really cool about the Switchblade concept is its potential to become a console-style piece of PC hardware, much like the Xbox 360 or the PlayStation 3. By removing the need to buy custom hardware for gaming and presenting an easy choice for both gamers and developers, it could create a new standard and a new market for PC gaming.

Sad to say, I don’t think that’s the direction Razer is aiming for with the Switchblade though.