Hidden among the mountains of financial data from Activision Blizzard’s first quarter financial results were three short bullet points which states that we’ll be seeing a Diablo III public beta by September. And possibly even the final game itself. This year!

The announcement was part of a conference call made by Activision Blizzard CEO Robert Kotick to update investors and the media on the game publisher’s financial results early this morning, Singapore time.

In the last slide from the conference call, under the heading “Diablo III” were three bullet points:

With Blizzard’s perfectionist “when its ready” attitude towards games development, and judging from the experience of the StarCraft II development cycle, it’s more likely that we’ll see a public beta by the end of the year with Diablo III only shipping to stores some time in 2012.

The relevant slide is attached below for your reference. 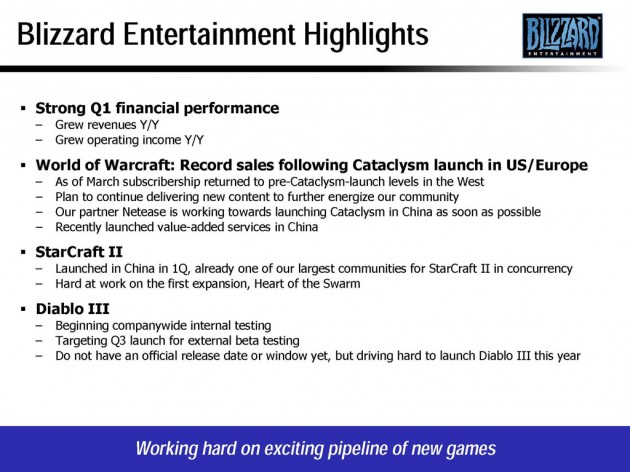 Update: I previously wrote that we can expect Diablo III to hit retail shelves some time in 2011. I had actually meant 2012 and this has been corrected. Thanks to Priss on Facebook for spotting the error!