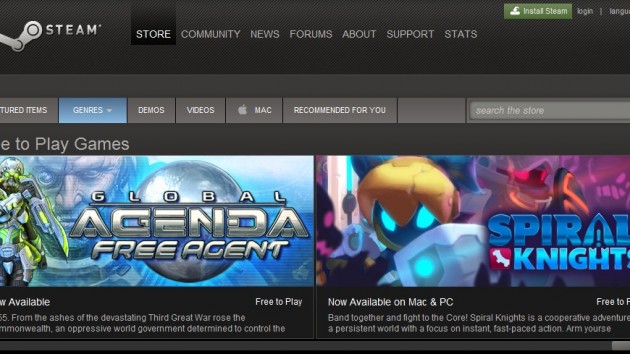 The three games are Spiral Knights, Champions Online: Free for All and Global Agenda: Free Agent, with Forsaken Worlds and Alliance of Valliant Arms being excluded from our region’s Steam store front.

In-game transactions in all of the titles will be supported by Steam’s micro-transaction backend system currently used in Valve’s Team Fortress 2.

All F2P games, including the above game titles, can be found in the dedicated Free To Play section on Steam.

Don’t let “free-to-play games” confuse you with “free games”, however. While it is tempting to believe that all sorts of free games will become available in the future, it is likely that only games which are supported by optional paid items will make their way onto Steam.

As Valve’s director of business development, Jason Holtman, puts it: “Free to Play games … [offers] developers and publishers new revenue opportunities and the ability to reach customers in areas of the world where the traditional packaged goods model is less popular than F2P.”

Still, this does set me thinking.

The Team Fortress 2 item store and its micro-transactions was merely a prelude to the inclusion of F2P games on Steam. Could Valve’s next step be their very own F2P game? DotA 2, anyone?