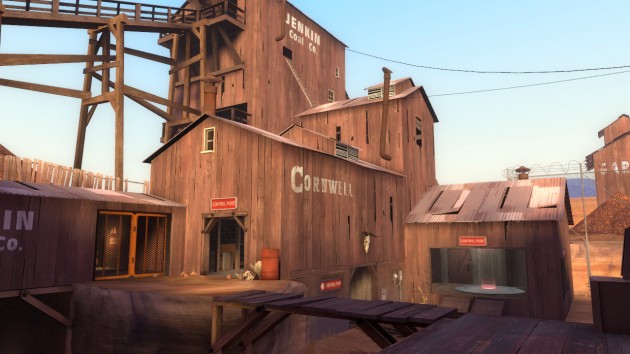 With Team Fortress 2 now a free-to-play game, there’s been an increase of new players trying out the game. Unfortunately, many of them are pretty lost and clueless about what to do in the various TF2 maps. For today’s guide, I will explain in detail how to play both the attacking and defending sides in one of the more popular maps, Dustbowl (cp_dustbowl).

At the start of each round, the RED team will have 60 seconds to set up their defences and get ready for the attack from BLU. For each capture point that the BLU team successfully takes, additional time will be added for them to attempt to capture the next point; it is ideal to capture the first point of each map as fast as possible so you get enough time to break down the RED team’s defences on the next point.

Looking at the map of Dustbowl, you can tell that Dustbowl is actually one big map that contains all three stages; only a certain section of the map will be open each round for each of the three stages: 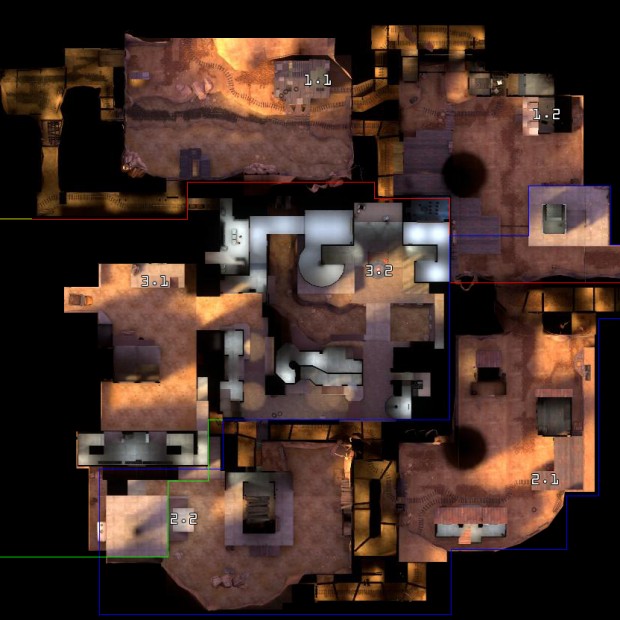 An overview of the cp_dustbowl TF2 map

For the first stage of Dustbowl, the BLU team has three different points of exit, labelled on the map as 1, 2 and 3. Exits 1 and 3 are on high ground, while exit 2 is situated on low ground. The RED team should take note of these three locations as these are possible locations where you’ll be facing the BLU team as they attack. Medics from both teams should be ready to use their ÜberCharge when the gates opens at the start of the round, as both teams tend to fire projectiles at these exits.

Once the BLU team are able to break out of their spawning locations, they will have to attack the capture point “1.1”, which is situated inside a hut. There are four openings to this capture point. The main entrances at the front and right of the hut are indicated with blue arrows. The other two openings require players to either rocket or sticky jump to reach elevated platforms which are situated at the side and back of the hut.

For the second stage of Dustbowl, there are only two exit points for the BLU team. This stage can be considered as one of the harder areas to push out in Dustbowl, as the RED team would often spam projectiles at the limited and narrow exit points. Once again, the medic’s ÜberCharges is indispensable here. Once the BLU team manages to push out of their spawn point, capturing the 2.1 capture point is relatively simple as it is located straight ahead on the second floor in an open and exposed area that is not easily defended. 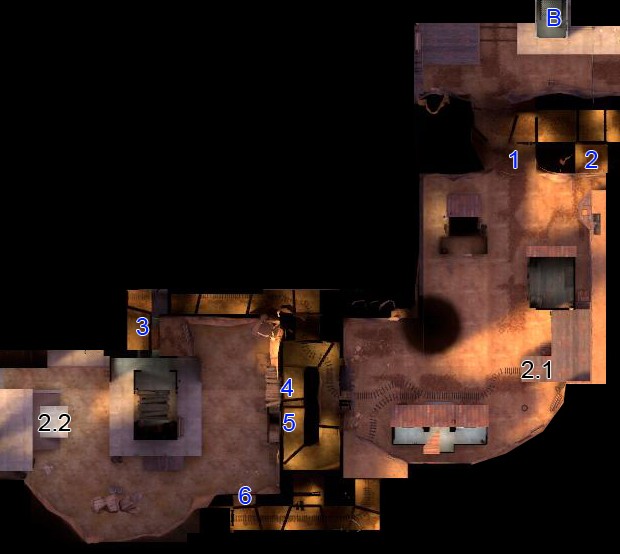 For the second capture point of the second stage, there are four openings where the BLU team will be able to attack from. Most players would like to build up their ÜberCharges in the tunnel of exit 3 as it is a relatively safe place to be. Most of the battle will occur just outside of exits 4 and 5 in the open area in front of the tunnel exits as both teams tend to collide at that area.

Once the BLU team manages to break out into the courtyard in front of exits 4 and 5, they will be able to either go through the middle path, flank from the left side or attack via the higher ground at the middle building. It is important to get hold of the high ground as it provides an advantage against the RED team. Also, the RED spawn is relatively close to the capture point, so the BLU team should be cautious of the RED team spawning while they are attempting to capture the point.

For the last stage of cp_dustbowl, there are three exit points, two from the front and one from the side. BLU players exiting from 1 and 2 have to be caution of the building in front of the exit as the RED team will normally attack from that sheltered area. ÜberCharges are almost necessary for the push to the capture point as the RED team will often deploy multiple sentry guns on both sides of the capture point. The RED team should take note that there are two spawn points for the RED team; the fastest way to the 3.1 capture point is from the left spawn (as shown on the map) as it has a passage way providing direct access to the point. However, this passage way will be closed once the BLU team takes the 3.1 capture point.

The second capture point for this stage is considered one of the hardest sections to push and clear without good teamwork as the bend labelled “4” is basically a choke point that will be filled with projectile spam. The BLU team should take note that in additional to the endless rockets, grenades and sniper fire, the medics on the RED team will often use the Kritzkrieg 100% critical bonus buff to help add more firepower to the chokepoint 4. Be prepared to fall back and take cover, or even pop an ÜberCharge to save your team.

There are two buildings before the capture point, one on the right and the other on the left (labeled RH and LH respectively). It is not compulsory to take control of these two buildings, but doing so provides a huge advantage to the BLU team as they will have a wider area to attack the red team.

While there is an underground passage leading to the capture point, with the entrance marked by the arrow and the exit labelled “5”, this passage is not often used by players as the RED team will hold a high ground advantage on BLU players exiting from the passage. However, since this passage is rarely used, it is possible that the a few players on the BLU team try to use the element of surprise to push in from here together while the rest of the team attacks from the front.

The Steam sale guide: How to get the best deals for your money