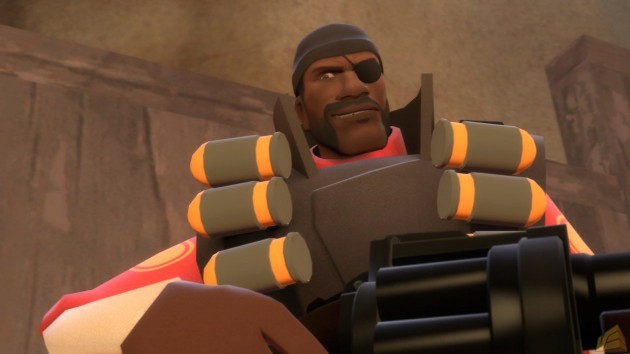 This guest guide was written by Cooty, one of the more prominent members of the Singapore Team Fortress 2 scene. Cooty plays Demoman as his main class and was part of the -V- Co. team which won the TF2 World Cyber Games Singapore National Finals 2009.

If you’re reading this in the hope that you’d be hailed as a saint in the public servers immediately, go somewhere else. This guide will not be presumptuous enough to teach anybody, not even seasoned FPS veterans, how to master the Demoman class in all aspects of TF2 gameplay by just providing a wall of text. No, it will simply walk you through the finer details that you might need to improve your gameplay, and provide at least a little challenge to the people who called you noob in the servers. Most importantly, this guide will not tell you how to craft weapons nor hats. Look to tf2wiki instead if you want to do that.

Cynical introduction aside, and provided you’re still reading, this guide will take you through the differences between public server (Pub) and competitive (Pro) gameplay. Mainly, it’d do a little rundown of the various Demoman weapons and how you can use them effectively in both settings. But first, you’d probably need to know Fact #1: The Demoman is arguably the most versatile of all the 9 classes in TF2. Yes, so if you’re a Soldier or Scout believer, it’s time for you to rage quit reading this and join the masses of noobs out there trying to master the rest of the weaker classes.

The reason that the Demoman is versatile lies in the fact that when the game was first launched, the Demoman was essentially a projectile-based character with his sticky and pipe bombs. However, updates by Valve have provided the Demoman with a melee aspect not matched by other classes. In fact, with the most recent Uber Update, the Demoman was given a set of weapons that totally removed his projectile weapons and made him a pure melee class. Of course, there isn’t any best way to play this class, and it is purely up to the individual to decide.

Valve has released so many Demoman weapons out there that it is hard to keep track of all of them these days. Since every class, including the Demoman, has only 3 weapon slots, it is a no-brainer that equipping a certain weapon will take away certain gameplay aspects that another weapon might provide (can’t have the cake and eat it too, I’m sorry). For example, equipping a Chargin’ Targe means you’d have to forgo your Sticky Launcher, and that means giving up sticky jumps in exchange for a charge attack. There are basically 3 different playing styles that you can employ in a public server.

This is simple. Beginners should always start with learning the default weapons. This means the Stickybombs and Pipes (grenades). Master them, and you’d find yourself racking up kills pretty easily. Besides the straightforward stuff like sticky jumps and trap-laying, to be really deadly one must be able to judge the trajectory of his pipes and stickies.

Learn to judge the timing, distance and trajectory of your charged stickies, and detonate them in mid-air. Put in some time with your pipes. People usually question why it’s the primary weapon, but that is because they are abusing the sticky launcher and not bothering to learn how to use pipes properly. Pipes are tricky to use because you actually have to hit someone to cause damage, otherwise it bounces off and detonates after a certain time. Moreover, pipes shoot somewhat to the right of your crosshairs, so it gets a little more tricky in that sense. However, pipes are really effective for taking out stationary objects (like a sentry gun or a spinning Heavy) and for area denial.

The Scottish Resistance and Loch n’ Load work on the same principles, although they function a little differently. Work on the basics first, then slowly explore the other weapons. 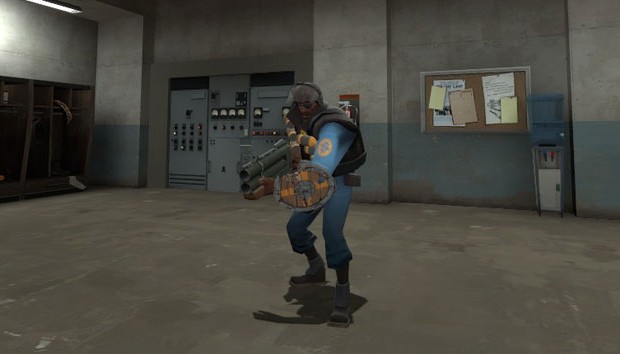 This is a wee bit trickier because it involves the use of the shields (Targe or the Screen) which enables the Demoman to use the charge attack. Charge attacks enable a Demoman to rush towards an enemy and engage him with his melee weapon (or make a quick escape). These attacks cause damage upon impact and also allows the Demoman to have a critical effect on his melee weapon of choice (Keep an eye on the charge bar. If it becomes red, your melee attack will be a crit). Equipping yourself with a shield also gives the class an additional resistance against different types of damage, depending on what you’ve equipped.

However, charges take some time to recharge and the window for causing critical hits is pretty small, so the timing of the melee attack is essential. A mised hit mostly means waiting patiently for the respawn timer (i.e. die), enough time to ponder about why you failed so badly.

Do note that you still have full usage of your pipes though, so use it to engage enemies from afar. When you see a good opportunity, charge in, make the kill, and get out quickly. The choice of melee weapons here is much more significant. I’d do a short summary of a few that you might have in your possession.

Eyelander/Unusual Headless Horsemann’s Headtaker: No random criticals. However, has the ability to take heads with a melee kill, which gives additional buffs with every extra head taken, up to a maximum of 4. The first head is usually the hardest to obtain, but the going gets easier once your heads stack up because of the added buffs. A Demoman with at least 4 buffs can be quite unstoppable in the right hands.

Half-Zatoichi: Making a kill restores the Demoman to full health. But there’s a caveat. Once you draw it, you can’t sheath it again till you make a kill. So make sure you know what you’re doing.

Ullapool Caber: This is perhaps the most interesting weapon. On hit, the grenade’s ‘head’ will explode, causing damage to the user and all enemies around him. The Caber is also quite the griefing tool. You may want to purchase the Sticky Jumper (not to be confused with the Sticky Bomb Launcher) from the Mann Co. store  that allows you to do sticky jumps without taking damage from your own stickies. This allows you to sticky jump behind enemies and before they are aware of it, hit them with the Ullapool Caber. 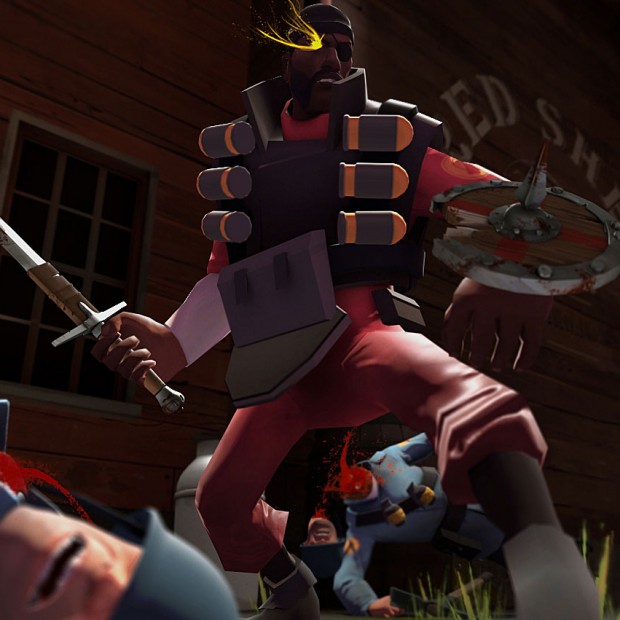 There can only be one... the Demoman.

This was made possible by the most recent Uber update, which introduced weapons allowing the Demoman to convert from a pure projectile-based class to a pure melee class. That being said, the play styles are polar opposites too. The best, and I daresay the only way to play this effectively is to equip the two new weapons, which are the Ali Baba’s Wee Booties (Primary Slot) and the Persian Persuader (Melee). A shield (Targe or Screen) completes this devastating trinity.

Basically, with this loadout, you’re in control of only one weapon, which is your melee weapon. What is devastating though, is the fact that these items allow you to turn tight corners, give an additional health bonus, reduces the charge recharge time by half and, most importantly, ammo pick-ups now gives the Demoman health. The flip side is that there are no critical hits nor can you collect any heads from enemies you’ve scalped.

This style really tests your ability and gamesense to make timely attacks, which makes it so challenging and fun.

If you’re a competitive player, you probably wouldn’t need to read this guide in the first place, so get lost. This is intended for newcomers who are interested in competitive gameplay, so fittingly, only some basic aspects would be provided. The best way to learn is still of course to take part in pugs, watch demos, join a clan and play some scrims. This guide wouldn’t teach you how to download and watch demos nor how to join a clan, so look somewhere else if that was your intent.