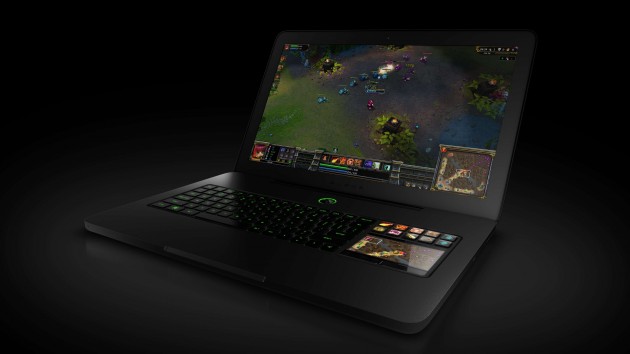 So NGNT’s prediction about the meaning behind Razer’s “PC Gaming is Not Dead” campaign wasn’t too far off: In a press release on the Razer website, the company has just unveiled the Razer Blade, a high-end gaming notebook, billed as “The World’s First True Gaming Laptop”.

The Blade will retail for US$2,800 (SG$3,368, not factoring in shipping and distribution costs), and will be released in North America at the end of this year. No official word on when the Blade will be available for the rest of the world.

The device will utilise same user interface from the Switchblade – a set of 10 adaptive keys for easy access to game commands (useful for MMO macro-ing), and an LCD touchscreen built into the keyboard, which can be used for touch controls or to display game information (similar to Logitech’s G15 and G19 keyboard LCD panels).

Product specifications, taken from the press release, are as follows:

My thoughts:
The Blade is essentially a high-end Switchblade, minus the form factor and portability. I have mixed feelings about this announcement. While I am glad that Razer are trying to bring PC gaming back into the limelight, a device that costs around SG$3,500 isn’t going to convince the average Joe that PC gaming is cheap either.

Do you want to play high-end PC games on the move? Is it worth spending that much money? For most of us, the answer would be no, because we can already play at home on our desktops, which can be assembled at more than half the price of the Razer Blade.

Too expensive? Doomed to fail? Share with us your thoughts on the Blade in the comments section below.

What’s the real message behind Razer’s “PC gaming is not dead” campaign?

Free gaming at HIGH this Saturday