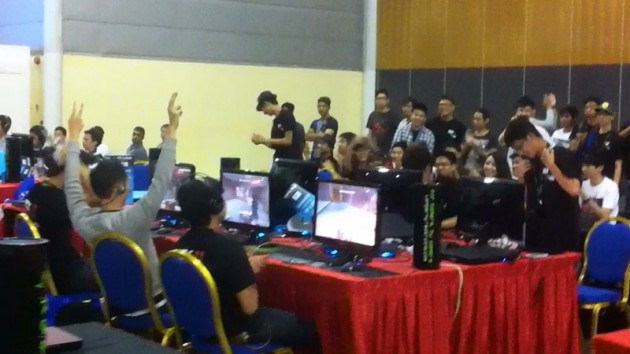 With dogged determination and crowd support on their side, Cataclysmic defeated Nefarious in an epic best of three series to be crowned champions of the StarHub Team Fortress 2 Masters 2011, held at The Games Xpo last night.

Both sides looked even after literally trading points in the first two games,with Cataclysmic first taking Coldfront 4-3 and Nefarious taking Obscure 3-2. The tiebreaker was then played on Freight, where Cataclysmic broke Nefarious’s momentum and morale after a vicious 18-minute fight for the first point and then powered their way to a 4-0 victory and the tournament title.

Cataclysmic team captain Bryan “x” Boey explained that the victory over Nefarious was particularly sweet for them: “Nefarious is one of our rival teams, so we’re very proud of what we’ve accomplished today.”

Despite how close the two teams were until 18 minutes into the final game, x also said that he wasn’t worried at any point: “We weren’t worried. All we were thinking about was the game, focusing on our strategies and how to respond to whatever Nefarious did.”

“We didn’t play those maps (Obscure and Gullywash) much, so I think we lost due to our unfamiliarity with those maps,” Fifth Company team captain Melvin “Cooty” Khoo said. “I think (placing fourth) is not bad considering that we haven’t played for some time. Still, we’re a little disappointed.”

Masterful team captain Benjamin “Summer” Chia was understandably happy with his team’s win, but admitted that the bronze match victory didn’t come easy: “The matches were very intense and they dragged for very long. Our team didn’t give up even though we were losing momentum at times. We kept on going and that’s why we won.”

Cataclysmic earned themselves S$2,000 for being the champions, while runner-up Nefarious receives S$1,000. Masterful’s share of the prize pot was S$500 for placing third.