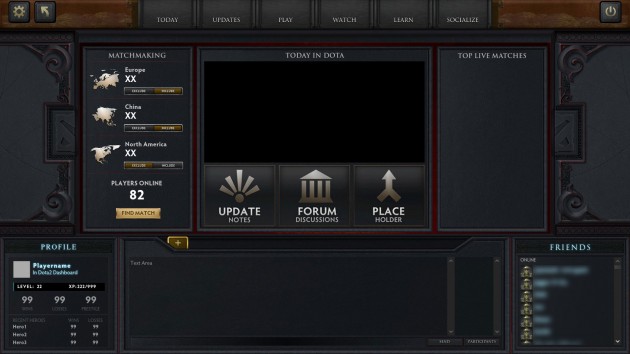 The recent leak of the Dota 2 closed-beta client has revealed that there are a total of 75 heroes included in the game, far more than the 46 we saw in action at the International Dota 2 Championships in Gamescom last month. Other reveals include regional matchmaking, kill cams, a player ranking system and the inclusion of custom items, hinting at the possibility of a paid item shop.

I managed to acquire a copy of the Dota 2 client, and have been exploring what I could of it. Read on for the juicy details.

The Dota 2 client I accessed was tagged as “Source Engine Build 4695, dota Version 40”. Another interesting note is that the dota.bsp map version was tagged as 22. Current Team Fortress 2 maps are version 20, and I wasn’t able to open the map using Nem’s Tools Object Viewer either.

The client did not have the server binaries included, so you can’t actually host games to play. In fact, you can’t do anything at all besides tweaking game settings, suggesting that this might be an early build. There are signs that it might be a build that predates the International tournament, as the Clorkwerk portrait is only represented by a placeholder in the client files.

Unless otherwise stated, the information below are from the English localisation strings, which can be found at:

All of the common game modes from Dota Allstars are carried forward into Dota 2 without any changes, with the exception of -dm Death Match mode, which has been renamed to Death Mode. The other game modes don’t appear in the localisation strings.

There are plans for 73 heroes, but at present only 46 heroes are enabled. Some of the additional heroes include the ever popular Batrider, Bounty Hunter, Undying, Omniknight and Luna. Portrait artwork, draft or final, are in place for all heroes with the exception of Alchemist, Clockwerk and Spirit Breaker in the game files.

Check out the full lists of heroes below:

Note: Some portraits are repeated (Faceless Void, Clockwerk/Rattletrap, possibly others) and there is, strangely, a random flask image.

You can find the list of all heroes in:

The localisation strings make reference to kill cams. These should be similar to the current Team Fortress 2 kill cams, where you’re shown your dead body and a still shot of the person who killed you, along with additional information such as the item the person was using and playing tips.

Ah, what would a game be without achievements. The achievements revealed through the localisation strings are very basic, but that’s probably because the game is still in beta.

Included in the localisation strings are also the following language choices for broadcast streams. My guess is that these are for filtering through the in-game spectator and stream mode built into the game itself as we’ve seen at the International at Gamescom.

It appears that new players will be able to select a “difficulty” level, probably for matchmaking purposes. The following strings were found:

Players will be ranked based on the ELO system. The ELO system is most well-known from its use in chess, and is a system that gives you a scaling number of points depending on the difficulty of your opponents. There is also a reference to “Karma”, which I can only guess to be some form of community ranking system.

The above image can be found buried in the client files, in a directory named “today”. I’ll hazard a guess and suppose it’s a featured story under the “Today in Dota” feature on the Dota client main menu. Well regional matchmaking is good and all, but what are the regions? The localisation strings comes to our rescue again:

And these regions are further divided into Match Groups:

The regions which aren’t listed under a match group simply don’t have them listed. Matchmaking Region information can be found in:

The localisation strings and other text also show strong signs that there will be custom wearable items included in Dota 2. These will be similar to Team Fortress 2 items, with provision for item levels, item rarity and item titles that changes as you gain number of kills built into the game.

One of the items specifically mentioned in the localisation strings are effects that will customise the look of hexes. You’ll be able to change them from the default of sheep to chicken, frog or a cheese (!). The files also make mention of custom weapons for the Antimage, custom shoulderpads for Beastmaster and a Top Hat for Axe (!).

Here are the relevant data I was able to find poking around in the strings files and other places:

BC2 client & server update due next week