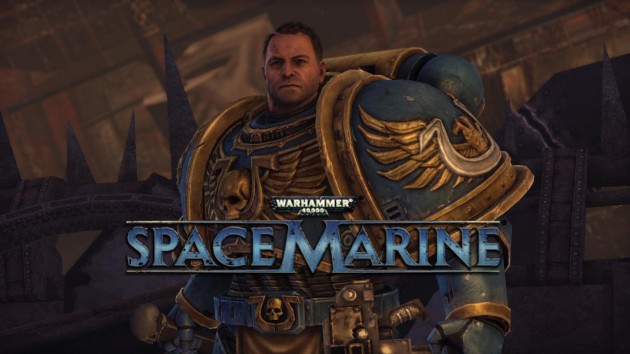 People within my inner circle probably know by now that I’m really more of a Warhammer Fantasy person. The universe of Warhammer 40K, as it is written, just doesn’t sit very well with me. Heck, science fiction in general doesn’t quite appeal to me to begin with, but that’s besides the point really. Though I’m neither a fan nor am I a knowledge base for 40K’s lore, I do know a little bit of this and that about the 40K universe. Also, I’ll try to preserve, as best as I can, an objective perspective while writing this mini-review, specifically touching on Space Marine’s gameplay and single-player campaign. 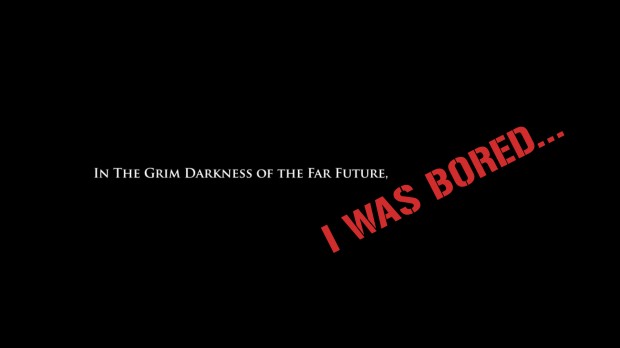 Let me start off my saying that I have very mixed feelings about this game. Space Marine happens to be one of those games that functions as it should and isn’t critically broken in any visually discernible way. However, for me at least, it doesn’t offer anything new or innovative to the genre that genuinely peaks my interest. 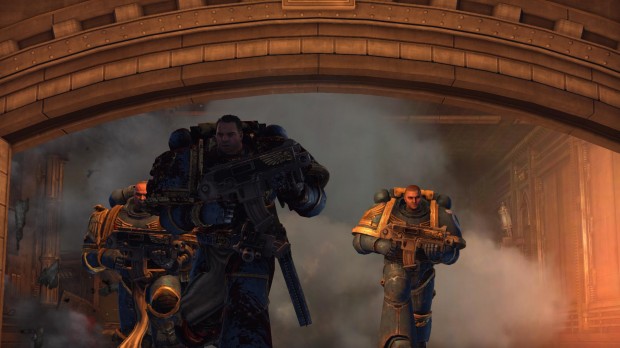 Filling the role of the Ultramarine, Captain Titus, you land on Forge World with a couple of your comrades with the intent of securing key strategic assets while aiding the Imperial Guard in the war effort against the invading Orks. Your mission, rather predictably, takes a drastic turn for the worse when a portal to the Warp gets inadvertently opened and the forces of Chaos hurl themselves into the fray.

Beyond all that and a couple of key plot points I shall not divulge, there really isn’t much else to Space Marine’s storyline that stands out or impresses. For the full extent of the game, you’re pretty much stuck on Forge World, surrounded by Orks or the forces of Chaos. The entire campaign, though split up into five parts encompassing multiple chapters each, feels like one very long and drawn out ground mission with little in the way of breaks or pit stops. The game simply requires you to work your way through the missions’ objectives and  fulfill any special condition where required. Above all else though, you basically kill everything that moves, that isn’t human at least. Your character was built to kill and quite aptly, killing is all you really get to do which, sadly enough, get’s stale pretty quickly. 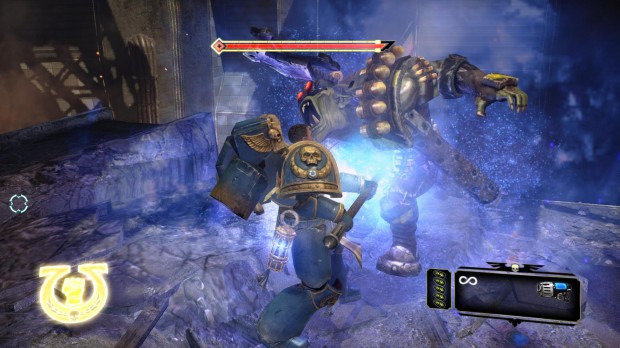 With all this talk of killing, you can expect a very good amount of violence in this game. For those of you who’re a tad more bloodthirsty than the rest of us, fret not for you’ll be bashing your way through Greenskins right from the get go. Like I said, all you really do, besides walking, is kill. Space Marine is chock full of squishy Orks, Cultists, Traitors and Chaos Space Marines and they’re all just waiting to fall under your Chainsword. 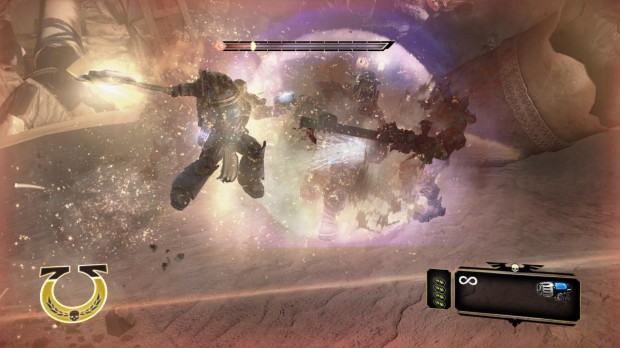 Now, the first problem I see with all the killing this game has to offer is that though there are hordes of enemies to literally mow through, the game neither provides a strong story nor a believable set of characters to hold everything together. Call it what you will but, in turning killing into such a full-time routine without the presence of a strong plot or source of motivation, the core activity of the game gets stripped of its meaning within the first couple of chapters. The game doesn’t even make any further attempt to recognize or reward you for the effort you put into all the killing you’ve done.

Even on the game’s hardest difficulty, your allies never die, you’re still tough enough to hold up against sustained gunfire and for the sheer amount of enemies the game hurls at you, they’re still pretty squishy and aren’t particularly difficult to fell in droves. I get that Ultramarines are supposed to be some of the toughest warriors out there that exist in the 40K universe but for this game at least, having three Space Marines shoot, slash and bash through what seems like hundreds upon hundreds of NPCs really depreciates the value of the game’s antagonists.

Having said all that, Space Marine just doesn’t invoke any desperation, urgency or motivation despite the scenario it tries to put across. In turn, having completed the game and obliterated as many enemies as it could possibly throw at me, I’m left feeling little to no sense of triumph or satisfaction. Every thing I killed in the game died because it happened to annoyingly be in the way and really, it felt as though I was just full-on blindly steamrolling through everything that stood between me and an objective marker. 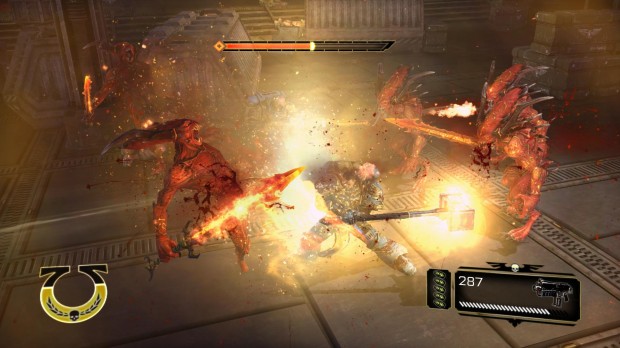 With the whole premise of the Ork and Chaos invasion on Forge World, Space Marine puts up a very commendable attempt at re-creating the best of what 40K represents and has to offer: war. I give the game and its developers a large amount of credit for having brought the 40K universe to vivid life, and even more so for bringing us up close and personal with characters and creatures we’re so used to seeing from a bird’s-eye view. As visually stunning as the game is however, it does lack in terms of the scale of what you actually get to experience.

As you run along hitting your mission objectives with them armored, blue pals of yours, you’ll occasionally meet up with friendly NPCs and inevitably start to notice just how much is going on with the whole war effort on Forge World as a whole. Sadly however, for the better part of Space Marine, courtesy of the plot and setting, you’re pretty much stuck crawling through enemy infested caves, ruins, tunnels and factories, and with the same couple of buddies no less. In some ways, your mission feels extremely hush-hush when compared to everything else going on around you and barely invokes any sense of epic triumph or glory. I even made a passing joke to a friend recently about how Space Marine should in fact be re-labeled Warhammer 40,000: Black Ops.

I’d reckon that the game would have been a whole lot more appealing as a whole if we got a taste of war on a larger scale. While I’m not a huge fan of 40K, I’d still be completely psyched at the prospect of storming into a huge battle (or dropping in off of a drop pod) with a full squad of battle brothers (a customizable squad even) accompanied by tanks, aircraft, Imperial Guard, titans and even marines of different chapters where possible. As it is, despite the awesome atmosphere and ambiance Space Marine possesses, the game experience it offers just feels way too linear and uncomfortably claustrophobic. 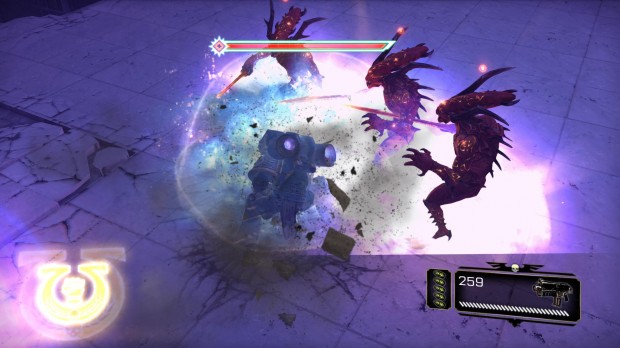 Before I wrap things up, let me just stress again that Space Marine isn’t broken, just extremely stale and at times, meaningless. For its genre, while not necessarily unique or special in any which way, it does work and unfortunately, that’s really all there is to it. Space Marine very simply strikes me as a whole lot of killing all packaged into a fast and action-packed few hours’ worth of game time, and spray painted blue to boot. There’s no element of strategy, no drama that grips you, no plot devices that boggle the mind, neither anything innovative in the way of gameplay (even in terms of combat) nor much at all that impresses or inspires even and because of that, for me at least, Space Marine just doesn’t make the cut of something that I’d sing praises about.

For everyone else who’s solely into the thrill of virtual wanton massacres though, let’s just say that in the grim darkness of the far future, you’ll probably get what you’re looking for with Space Marine.