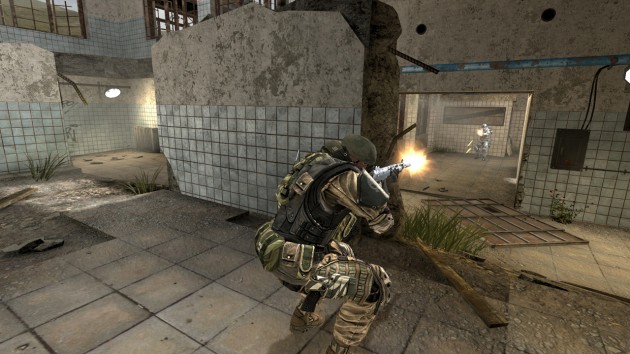 Proving that we can’t have too many free-to-play FPS games in Singapore and Malaysia, Asiasoft will be bringing Alliance of Valiant Arms to Singapore with a closed-beta test in November. I left my skepticism about F2P FPS games at the door when I attended the media preview for A.V.A last Friday and was pleasantly surprised at the ways which the game manages to differentiate itself from the competition despite being more of the same. Read on for my impressions of A.V.A.

Joining my first game, I was struck by how good the game looks as far as Korean-made F2P shooters go. Coming from the pixelated textures and blocky models that are pretty much standard for Korean-made F2P shooters, A.V.A and its Unreal 3 engine was a breath of fresh air. Don’t expect too much though: the graphics are still average for today’s games; it’s just that A.V.A is better than most of its F2P peers.

I also had the opportunity to try out the built-in support for NVIDIA’s 3D Vision technology. The game translates into 3D pretty well with the 3D glasses on, but I found that HUD elements — such as the crosshair and team name plates — came out blurred and mildly nauseating. Probably not something for everyone, and certainly not for play over long hours.

A.V.A plays just like the typical Korean-made military shooter, with two teams of similarly-equipped players fighting to achieve objectives, which differ according to the game mode being played. There’s Demolition mode, which plays exactly like Defuse maps from Counter-Strike. There’s Annihilation mode, which is your basic team deathmatch. And being a Korean FPS, there’s the obligatory Zombie mode, where the goal is to either survive or turn everyone into zombies. 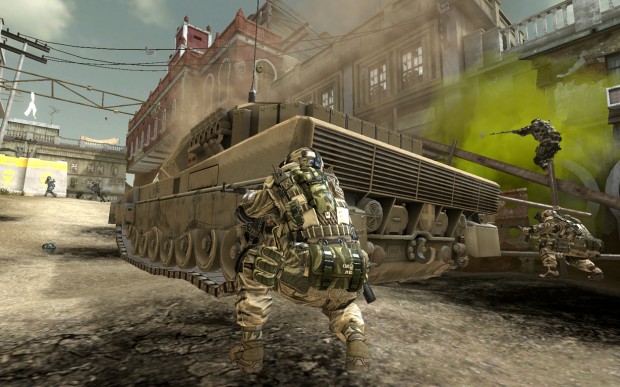 You have to escort and protect the tank as it tries to make its way to the end point.

The game mode which stood out for me was the Escort mission, which is similar to Payload maps in Team Fortress 2. In this mode, players have to escort a tank as it makes its way through a map. Along the way, the enemy team will fire RPGs to damage and disable the tank. You’ll need to repair the tank and make sure it reaches the objective before time runs out to win the round.

Each game mode is fast-paced, with maps that encourage constant movement and lots of actions. It’s very difficult to camp as a solo player, since almost every part of the map has more than two points of entry. As a result, I did find that it was hard to play tactically on your own. If you don’t keep running-and-gunning, you’ll find yourself outflanked and backstabbed at every turn.

Where A.V.A begins to differentiate itself from other F2P military shooters is in its highly integrated class and weapons system. You can select from three classes, each of which have their own weapon specialisations. the Point Man uses submachine guns, the Rifleman uses assault rifles while the Sniper uses, you guessed it, sniper rifles.

Much like the Battlefield series, each class has a different set of weapons at its disposal and you can switch classes before you respawn. This effectively means you have easy access to three different loadouts on-the-fly, rather than having to dig deep into menu hell to swap weapons in-game like in many other F2P military shooters. Each weapon can also be customised through the selection of accessories, such as scopes, barrels and grenade launchers. Accessories have varying effects, including modifying the range, accuracy and damage of weapons.

That’s not the case in this game. I’m told by Asiasoft that in A.V.A, all weapons are available for purchase using in-game currency. As you use weapons, they take durability damage and you’ll need to repair them using in-game currency too. Spending hard cash, then, is a matter of deciding whether you want to take the time to farm or just exchange a small amount of real money for in-game currency. That’s infinitely more fair, and arguably more innovative, than simply locking away the top tier weapons for cash users only.

Ultimately, I can’t honestly say that Alliance of Valiant Arms is a great game. If you’ve already splashed some cash on the Battlefield series or the Call of Duty series, this is probably not the game for you. On the other hand, if you’ve been playing Blackshot, Counter-Strike Online, Sudden Attack, Special Force or one of the many free-to-play military shooters in the market, you’ll want to look at A.V.A. It’s definitely one of the better, if not the best, games in the genre right now.

Gamers up in arms over WGT game lineup