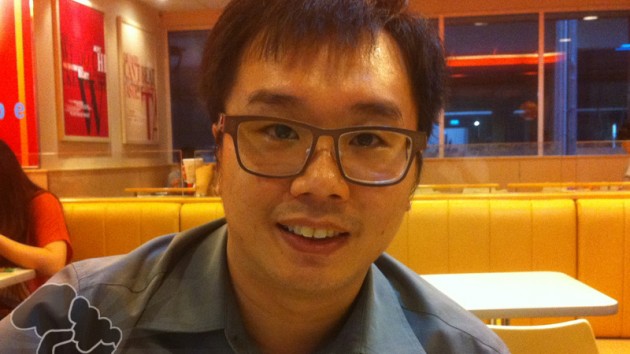 Chris “M_Flo” Hong will be organising a beginners’ and newcomers’ tournament for Super Street Fighter IV: Arcade Edition this Saturday at the Colosseum cyber cafe. Chances are — if you aren’t already involved in SF4 tournaments or hang out with the Bugis arcade community — you probably haven’t heard of him.

That’s why NGNT is bringing you this interview with M_Flo to tell you more about what this man stands for, and why you should play in his tournament if you love Street Fighter, no matter how much think you suck (hint: you probably don’t). Read on for the meat.

Tell us more about yourself.

What inspired you to do a beginners’ tournament?

I wanted to bring up awareness of the Singapore fighting games scene, and also to widen our fighting games community. There’s actually a lot of players who want to join tournaments, but they’re afraid to join normal tournaments that are organised by Round1, Battlefield Fridays or SGFighter, because they know that there will be lots of pros playing.

So I thought, why not come up with a beginners’ tournament where everyone’s skill level will roughly be the same? I don’t want them to go to a tournament, and straight away in the first round they fight the likes of Leslie, Gackt or Xian. They’ll feel demoralised. At least this tournament will be quite open to beginners and newcomers, and from there we can see which players are good, and maybe we can groom them to be a top player, or encourage them to go to the Bugis arcade more often to increase their skill level.

So what you’re looking to do is to find and bring out undiscovered talent?

Correct. I find that our fighting games scene is actually quite weak compared to other countries. We currently have a good players, but in most tournaments the winners are always the same few people, like Xian, Leslie or Gackt. It’s not healthy, honestly speaking. If you only have the same few top players all the time, it shows that the skill level in Singapore is becoming stagnant. Conducting and organising this tournament may actually bring out another Leslie, Xian or Gackt. I hope this tournament will discover some players who can actually beat those the current top players.

Where do you think these undiscovered talent might come from?

I think most of these players will come from the online scene. These are players that play from home and for leisure. I have fought a few of them on PSN and they are quite strong, honestly speaking. I have not even seen them before, at Bugis or anywhere else. It was quite shocking to play them, their skill level is not even average, I can say that they are above average. It’s just that they need some fine tuning and more match-up knowledge, then they will be good.

Why should online players come out from the comfort of their homes to play in the tournament? Is it good for them?

I believe these players do have interest in Street Fighter and fighting games, otherwise they won’t be playing online or be this good in execution. I can feel that they are kinda shy to approach the pro players in Bugis to learn more, or they may not have met the right people or attended the right event that will pull them out from the closet. They’re kinda hidden. This tournament is not only an event to pull them out, but also to make them realise that they are appreciated for being good in the game, people will say, why not give it a try in a top level tournament?

Do these newcomers continue to play in the arcades and in tournaments after their first taste of offline play?

A few of them do, although not the majority. The skill level in Singapore is getting better, so they still have reservations about going to play in top tier tournaments. They’re scared to be slaughtered, so to speak, and they don’t want to join because of that. I hope this tournament will actually make them come out for it.

One thing about a community is that it’s built on the bonds people share with each other. Do you have any plans to introduce people to each other at your tournament?

I will be doing the introductions at the tournament, but I definitely can’t link up all 50 players on my own. I will try my best to do whatever I can to let them mingle with each other.  It’s good for them to know who are they, because when you play online on either Xbox Live or PSN, you can see their nicknames but you still won’t know who they are. It’s good to actually know the real person, so you can share pointers with each other. It will be a win-win situation.

Some communities tend to get elitist and unapproachable after awhile. Do you think this is a problem with the community here?

Currently, it’s not that bad. Most of the people are very friendly, especially the Round1 community or even Game Axis. They’re actually very approachable. I haven’t met anyone that is not approachable. I myself was new to the Street Fighter IV community when it first came out, so I had to get to know the rest of the people to get some pointers. They’re actually nice people who don’t mind giving out advice.

If you started late, or maybe just started with Arcade Edition, now is a good time to approach the top players, whether at tournaments or in Bugis. Singapore has a lot of top players using many characters. For example, we have a grand master Sagat in Singapore, Leslie; we have Gackt with Fei Long; and Real Deal with Ken. You can ask them for pointers. There’s a wide spread of players, so it’s easier to learn.

About your tournament, I’ve heard that you’re paying for this out of your own pocket. Can you tell us how much you’ll be spending?

There’s no company sponsoring this at the moment, so I will probably spend S$200 to S$300, depending on the prizes. The registration fees collected will first go towards covering the venue fees, then towards paying for prizes. If there’s still not enough, I will top up out of my own pocket. There’s no pocketing of money here, all of it goes to the event.

Do you think you’ll be doing anything more for beginners and newcomers after the event? Maybe start a Facebook group, or run more tournaments?

I don’t have any plans at the moment, but I’ll still have the contacts of the participants. I’ll see how this event goes first. In the future, I’m thinking of coming up with a gaming event series, similar to Battlefield Fridays, but I want to do it for all the beginners. The goal is to let them enjoy the game first, then from there to get them to ask themselves if they are ready to step up and play even better, like a pro.

Don’t forget to register and check out M_Flo’s beginners and newcomers tournament. Even if you don’t want to play, come down to watch between 2pm and 8pm at Colosseum, Iluma.