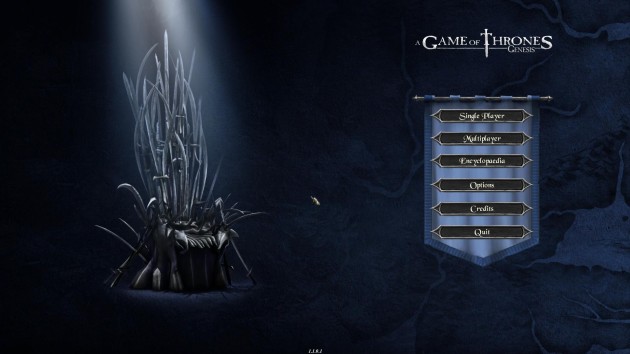 Despite the meteoric rise to popularity the Game Of Thrones TV series has seen over the past year, its PC game counterpart, Genesis, hasn’t seen a great deal of hype. Although the game has been out for a good two weeks or so, I finally managed to set aside some time to give this game a quick spin.

The first thing you need to know about A Game Of Thrones: Genesis is that it isn’t your average RTS. In fact, it stands quite a distance away from the staple RTS titles and franchises that we’ve so gotten used to over the past decade or so. Crudely speaking, Genesis is a highly complex mash-up of “capture the flag”, “rock-paper-scissors” and “tug-of-war”. 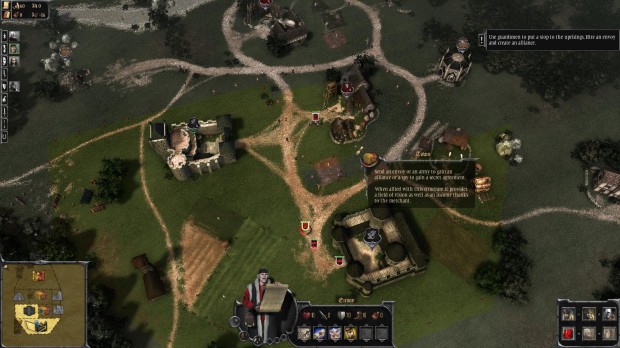 In a standard skirmish or game setting, your goal is acquire 100 Prestige Points, thereby seizing the Iron Throne. A player’s Prestige Point gain is governed by four specific conditions. In order to pull ahead of your Lordly peers, you’ll need to amass the largest income, establish for yourself the most number of allies, kill the most number of people and gain control of a sept. In turn, you may lose Prestige Points as well via declarations of war, the discoveries of your Great Lord’s bastard offspring or your falling victim to one or more secret pacts and agreements.

Starting with a HQ in the form of your Feudal Home, the bulk of the game requires you to capture nodes, or flags if you will. These nodes take the form of various neutral castles, villages and so forth and are scattered across the map. Once you’ve taken control, or as the game puts it, established an alliance with a node, your job will be to defend that node, a task that shouldn’t be taken lightly. Taking control of any node, neutral or belonging to an opponent, entails sending a specific unit to capture it. Your Lordly peers and enemies will, quite obviously, stop at nothing to wrestle for control over the nodes under your charge. 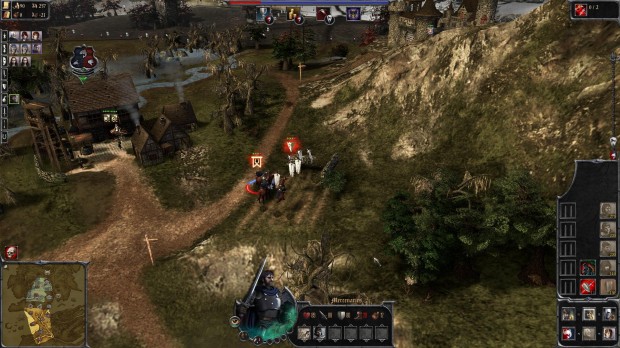 Like any RTS, you have at your disposal a wide variety of units which, in Genesis, is split between combat and non-combat units. The purpose and function of combat units don’t stray far from that of the units in any other RTS (military offense, defense, etc.). Combat units are expensive and with each unit you train, the base cost of that unit rises. Coupled with the negative hit to Prestige you receive through acts of war, it’s almost as though the game’s out to dissuade you from leaning on a military crutch, not that you could easily pull off a win solely through force of arms anyways. Which brings us to non-combat units.

Your selection of non-combat units include, but are not limited, to Envoys, Merchants, Spies and Noble Ladies. In times of peace, these (and others) are the units you’ll spend most of your time managing as they serve to not only capture nodes, but to protect and reinforce them as well. Each non-combat unit available to you serves a very specific purpose and possesses an edge that sets them apart from the rest of the pack. Only an Envoy, for example, will be able to capture nodes and prevent other Envoys from capturing nodes they occupy. A Noble Lady may, on one hand, serve to “marry into” and thereby upgrade a node, or, on the other, serve as a seductress and convert opposing units for your cause, Envoys included. A Spy allows you to investigate nodes and units to ferret out any traitors within your ranks (more on this in a bit) whereas an Assassin, though technically a combat unit, is shrouded in stealth and allows you to remove specific targets that obstruct you from capturing a node in the first place but may, in turn, be revealed by a Spy. All of these non-combat units (and more that have not been mentioned) are part and parcel of the game’s intrigue and contribute to the complex system of what Genesis likes to call underhanded tactics. 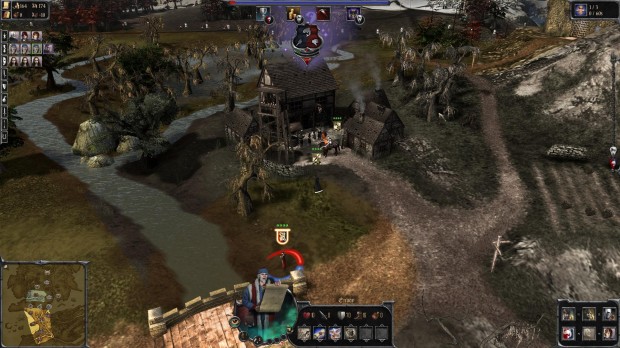 A spy infiltrates a "node"

The underhanded tactics Genesis lays before you are what intrigue me the most about the game and for sure, they are what set it apart from any other RTS. Simply put, what you see on screen isn’t always what you get. For example, you may see an Envoy that flies the colors of your house. Unbeknownst to you however, a stealthed Rogue came by while you were unaware, and paid your Envoy off to work for your very enemies, revealing to them everything that he sees. On the other side of the map, a Spy may have trotted along and entered one of your nodes, stealthed no less, and formed a secret agreement with it, thereby depriving you of the node’s resource and Prestige without your knowledge. And while you’re putting your own Spy to work and investigating these oddities, the Noble Lady you freshly installed into a nearby village node gets slain ever so quietly by an opposing Assassin, severing your blood alliance and the added income generated from the node. Beyond all that, I haven’t even begun to (and I won’t) talk about the secret pacts and false alliances you can establish with your fellow Lords. What all of this means to you is that to remotely survive in Genesis, you need to be highly attentive to detail, quick to react and have a very firm and knowledgeable grasp over your realm and people. For all the things that happen, know that there is more than one game being played and you’ve got to be pro-active and reactive in responding to any threat, especially towards the ones that sneak up on you from out of nowhere.

The one thing that I do find rather disconcerting about the game, however, is its lack of heart. As it is, there is a lot to learn and remember about the way Genesis works (enough to fill an in-game encyclopedia), to an extent that it becomes almost clinical. Every unit, tactic or strategy you employ becomes a tool, not very much more. The game doesn’t  possess any frills to dazzle you with and the campaign even doesn’t make much of an effort to motivate you, each chapter coming off as “just another map to finish”. I personally figure that it has to do with the seemingly one-dimensional way with which the story is told and how it doesn’t fully take advantage of the rich lore A Song of Ice and Fire has to offer. You don’t feel any ownership or loyalty to any one character or House and effectively, there’s always someone else calling the shots, getting you to only make strategic and tactical choices that befits the campaign. In a sense, the campaign kind of plays out like a very long drawn out tutorial and sets you up with all the faculties needed to take your game online. I haven’t gone quite far into the campaign so if you disagree and feel that the game does begin to pick up at some point, feel free to point that out in the comments below. 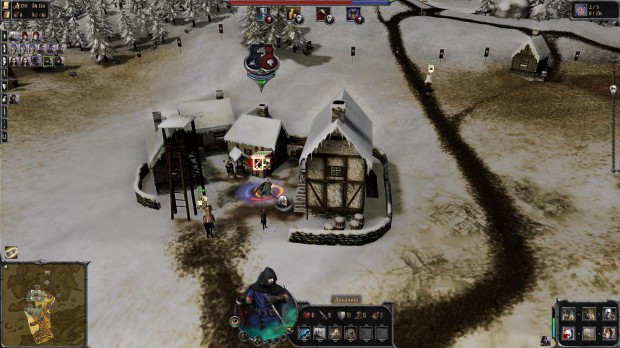 Whether or not Genesis fully captures the spirit of ASOIAF or the Game Of Thrones TV series, I leave for to you to decide. Personally, while I’m not particularly impressed by the way Genesis has portrayed ASOIAF’s fluff, I feel pretty good about its gameplay. Genesis strikes me as a title that doesn’t draw your attention at first glance but once you’ve laid your hands on it, you realize that there’s quite a bit more to it than you initially presumed. Looking beyond that even, you realize again that for all its complexities and fantasy trappings, you’re playing quite a complicated game of, as I’ve mentioned once before,  “capture the flag” or “tug of war”; and that alone isn’t too bad of a deal seeing as Genesis manages to keep you not only engaged, but on your toes as well. It’s something rather fresh, somewhat unique even. While not quite perfectly executed, the way Genesis incorporates the themes of and encourages diplomacy and intrigue over outright war makes the game all the more challenging, more so than your average RTS. It’s a difficult game to learn, and even more so to master I’d reckon and definitely not for the faint of heart or anyone less than a hardcore strategy player or enthusiast. As Cersei Lannister put it herself, in the Game of Thrones, you win… or you die.

Alliance of Valiant Arms is better than the typical F2P FPS, but still an average game