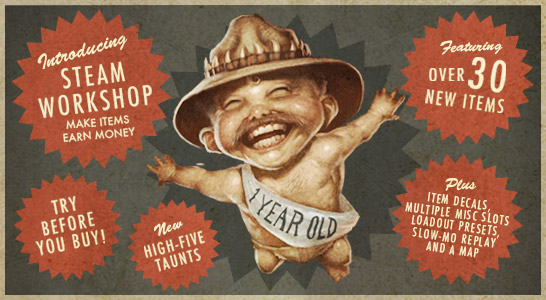 You may not know it, but that shiny new weapon or hat you bought from the Mann Co. Store in Team Fortress 2 may have contributed to the over US$2 million (S$2.5 million) payout that community-contributed item creators have received since the TF2 item store opened.

To celebrate that milestone and the one-year anniversary of the Mann Co. Store, Valve has announced the first annual Manniversary Update and Sale. Read on for the details.

Besides the obligatory new hats and cosmestic items — 30 of them, in fact — the Manniversary Update will introduce loadout presets, multiple miscellenous item slots, an item decal system and a new taunt.

The Mann Co. Store has also been updated with a week-long “try before you buy” item try-out system, and the Steam Workshop, an improved item submission system that allows you to browse, rate and offer feedback on community-created items which are uploaded by their creators to the Workshop.

Almost everything in the TF2 in-game store is on sale, and will remain on sale until Monday, 17 October.

Team Fortress 2 to get new achievements and weapons tomorrow