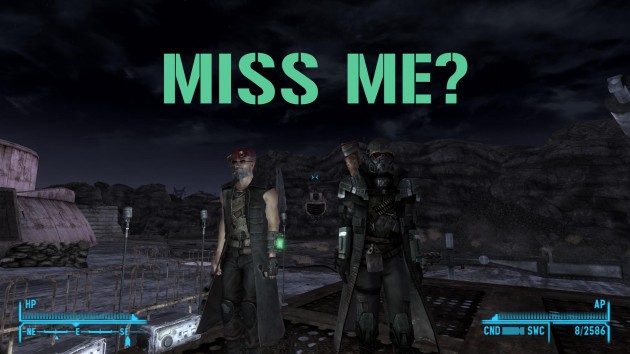 The scorching sun, an endless irradiated desert, warbands of chem-fueled raiders, the sights and sounds of the Strip, a war between the Bear and the Bull and in the middle of it all, the Courier.

Such is the Mojave Wasteland that I once walked, loved, hated and now miss. Although a year has passed since I last set foot into New Vegas, one thing is for certain: War… War never changes. 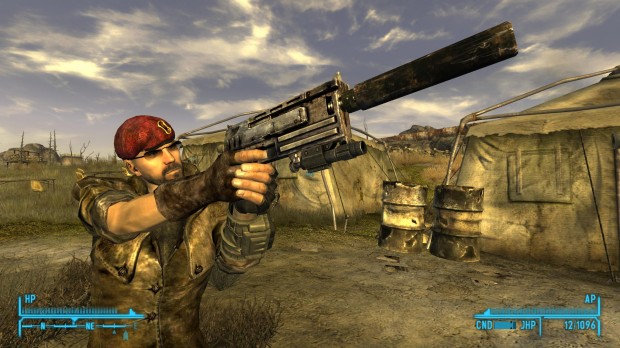 I first played Fallout: New Vegas within a week of its release and most unfortunately, my first couple of playthroughs left me with quite the unpleasant aftertaste. While New Vegas was enjoyable at large, it was riddled with the most annoying of technical issues and for me least, the game didn’t provide an adequate amount of closure. In a sense even, New Vegas wasn’t, to me, a complete game. A good year’s worth of patches and DLCs have flown by however and as of the release of the game’s final few pieces of additional content in September, Fallout: New Vegas is now complete, a game that I was more than ready to revisit.

Fallout: New Vegas, patches and all

Before I go on, let me just ramble on a little about the state of New Vegas, as a whole. Back in the day, while the game was every bit playable, it was mind-numbingly buggy and made for an experience that was more frustrating than it was fun. With all them patches that have been rolled out over the past year, the game has definitely seen a great deal of positive improvement. In general, the game feels a whole lot smoother and although I did suffer the occasional crash, I wasn’t faced with any monumental or game-breaking technical issue. Everything seems to work as intended and very thankfully, I didn’t have to deal with any erratic behavior on the part of the game’s NPCs, quests or dialogue. While game’s balance could have done with a little more work, it didn’t strike me as a huge issue and I’d even go as far as to say that with all the subtle changes and fixes New Vegas has seen over the last year, the game made for quite the refreshing experience.

On to the DLCs! 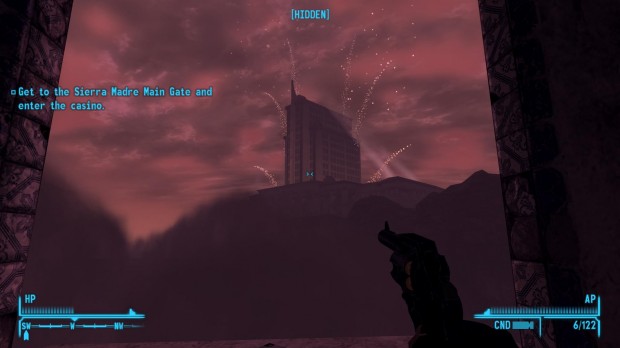 I love the atmosphere Dead Money exudes. Compared to its DLC successors, I find that Dead Money very easily stands out for invoking a sensation that is oddly calm and yet horribly distressing. It might not make sense to those who’ve not played it but the content you face in Dead Money is not only creepy but also very slow and methodical. Set in a “haunted” casino, you’re stripped of your gear and placed in the most discomforting of circumstances with the odds of the Sierra Madre’s long lost secrets stacked against you. It’s essentially a huge puzzle and you’re more or less forced to accede to the very whim of a vengeance driven mad man. Unlike the DLCs that follow, Dead Money literally snatches you away from the Mojave and forces you to thrive in an environment that is anything but anyone’s comfort zone. While I may not be the biggest fan of the survival horror theme or genre, it is for these reasons that I personally feel that Dead Money is unique and ranks as the best of all of New Vegas’ DLCs.

I have generally mixed feelings about Honest Hearts. On a positive note, I like how it manages to establish believable links to various sub-plots that run in the original game. However, having played this fresh off Dead Money and its complexities, Honest Hearts struck me as little more than a very linear and simplistic Run ‘n’ Gun. In terms of both challenge and plot, Honest Hearts is pretty underwhelming altogether.  While the Courier’s brief interactions with the Burned Man makes for enjoyable dialogue, the rest of the DLC feels pretty empty, lacking in character and depth even. In crude terms, I could sum up my experience with Honest Hearts as me having walked in, ran around and shot every “red” that moved. That is all. Among the four, I’d easily say that Honest Hearts is the DLC that I care for the least. 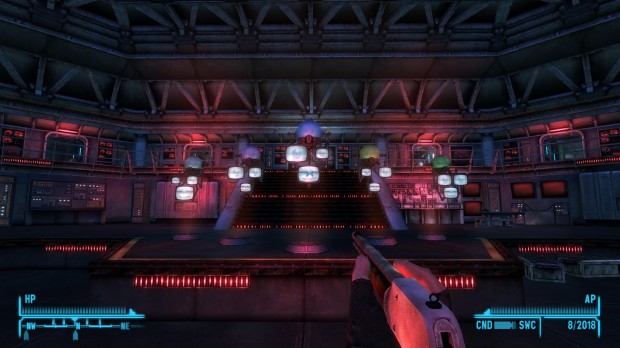 I’d reckon that the experience Old World Blue offers makes for a complete one-eighty compared to that of Dead Money’s. OWB is downright hilarious, its setting highly eccentric, its NPCs and dialogue laced with all sorts of dark humor. While the DLC’s quest and content aren’t particularly unique, I was highly – no, EXTREMELY entertained by the comedic ramblings and overall incompetence of the Think Tank and the conflicting and hilariously stereotypical personalities of the Sink’s robots. Furthermore, I was greatly intrigued by the clues and logs both Elijah and Ulysses (of Dead Money and Lonesome Road fame respectively) left all across the Big Empty. It might not come as essential but it’s the kind of extra fluff that breathes more life into a story and its characters. More so than Dead Money and Honest Hearts really, OWB very strongly foreshadows your journey into the Divide and your inevitable encounter with the original Courier 6. 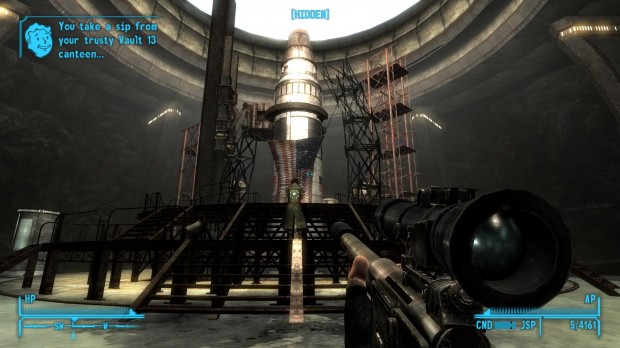 The Lonesome Road is what it says it is. Your task simply entails travelling from one point to the other. Sure you’ll meet the occasional pack of Deathclaws or abominations but in terms of active plot, content or friendly NPCs even, there really isn’t much to be had. The real point of this DLC, however, is closure.  What it does is explain, through Ulysses and various logs found across the Divide, why things are as they are in New Vegas and has you explore the history of not only the Courier but also of the tortured land on which you cross. This was the very DLC that, for me at least, helped to tie up all of the game’s and the Courier’s loose ends. Had this DLC been at the very end of New Vegas upon its release, I probably would have enjoyed myself a great deal more and not to mention left with a better impression of the game as a whole. I don’t intend to question the design decisions of the game’s developers but without The Lonesome Road, Fallout: New Vegas was never complete.

The GRA is essentially an equipment pack that loads New Vegas with a whole host of weapon, weapon mod and ammunition options. Above and beyond that still, it introduces some of the most powerful unique named weapons the Mojave has ever seen. As if the game’s balance weren’t already on thin ice, the GRA very effectively tips the scales in your favor, regardless of difficulty mode or even any enemy or encounter you wish to take on. The stuff the GRA has to offer is very customizable and packs a real punch. As much as I won’t deny how awesome it feels to wield its instruments of carnage and death, the DLC definitely mucks with the natural order of all things combat. It’s not a huge issue of concern really, though I will admit to feeling slightly discomforted by all the excess firepower. I guess it’s just too much of a good thing for me to handle. 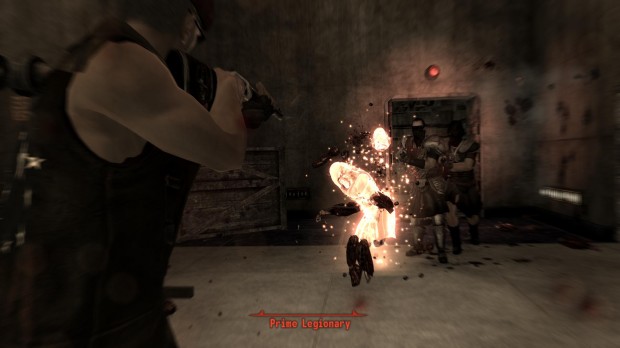 And there you have it, my quick re-assessment of Fallout: New Vegas and its DLCs. I spent a great deal of the past week playing Fallout: New Vegas and I can assuredly say that even with absence of player-built mods, I had an absolute blast. The game may not have been polished a year ago and even now, it may not have even reached a state of undisputed perfect but really, all of that doesn’t take away from the fact that New Vegas is a great game nonetheless. If you’re willing to fork out the cash for the full game and its DLCs, you can be sure that with a little patience, you’ll be treated to an epic story of how one man’s actions and message can change the face of an entire nation. It’s the story of the Courier, a story that deserves to be told for generation upon generation, a story with one simple lesson.