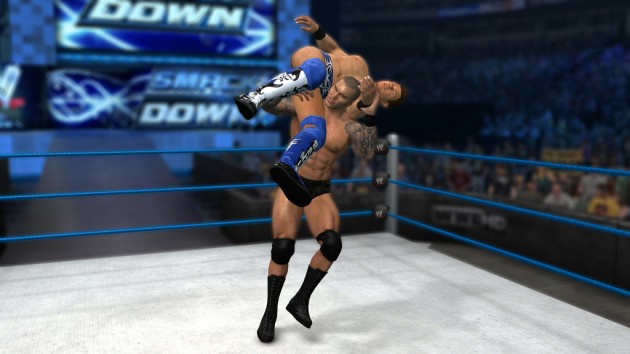 I’ve never been a big fan of pro wrestling and their associated games, so I was more than a little apprehensive when I got the chance to try a preview build of WWE ’12 — especially after my experience with the train wreck for controls Smackdown vs. Raw 2010 had — at the Epicsoft offices a couple weeks ago. I’m happy to report that despite not really knowing what to do, I managed to enjoy the experience.

While I wasn’t told (and didn’t ask, shame on me) the specific build being demo’d on the Xbox 360, from the roster of WWE superstars available — Randy Orton, John, The Miz and Alberto Del Rio — I gathered that this was the version that the world saw at E3 earlier this year.

First off, the game looks amazing. You can’t help but notice how detailed each player’s model is in-game. Using the above game footage as reference, notice how Randy Orton’s tattoos are all sharp and well-defined; there’s no blurred or blocky textures that rudely bring attention to the fact that these are merely computer generated pixels you’re watching.

While we’re on the subject of visuals, I have to mention how superbly handled player animation is. It’s something that’s easy to miss, simply because every motion looks so natural and human-like. Even when attempting some of the most physically complex moves, there’s no awkward movement or clipping body parts. There were moments during grappling that there were random limb spasms, but I’d put this down to being an early build of the game that would be resolved in retail.

It’s one thing to watch game play videos or in-game cut scenes, it’s an entirely different experience when you have the controls in your hand manipulating the game. As I mentioned earlier, I had a terrible experience with Smackdown vs. Raw 2010. I simply could not figure out how to get things done with its weird control scheme. Thankfully, WWE ’12 was completely intuitive to me.

I found myself figuring out how to strike, grapple and pin opponents within a few moments of picking up the controller. The on-screen contextual hints to hit RT for counter or Y to pin, for example, were a great help too. As a relative newcomer to this genre of games, I found myself enjoying the experience and didn’t feel like I had to fight against the game or with the controls to get the on-screen wrestlers to do what I wanted them to do.

If you’re a fan of pro wrestling and are looking to get a title for your console, WWE ’12 is looking great, at least from this newbie’s point of view. From what I’ve read and what I was told, there’s a lot more depth of play both in strategy, mechanics and control that I didn’t have the time to suss out, so there should be something in there for veterans too.