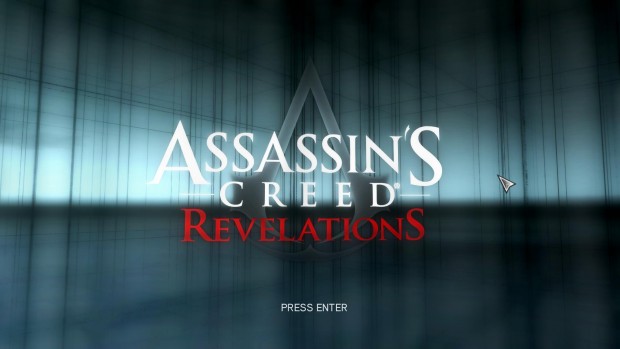 It’s been a long time coming but with his enemies put out to pasture and the pains of age setting in, Ezio Auditore embarks on one last epic journey to discover the truth – the real truth – behind all that he has been fighting for since the day he took up his father’s mantle as an Assassin.

Before I go any further, let me just get one thing across here. As far as Revelations goes, things really haven’t changed all too much since the last major Assassin’s Creed title, Brotherhood. Ezio may have put on the years and gained a bit of a paunch, but it all doesn’t take away from the fact that Revelations looks, feels and plays just like Brotherhood – which, I might add, looks, feels and plays just like Assassin’s Creed 2. 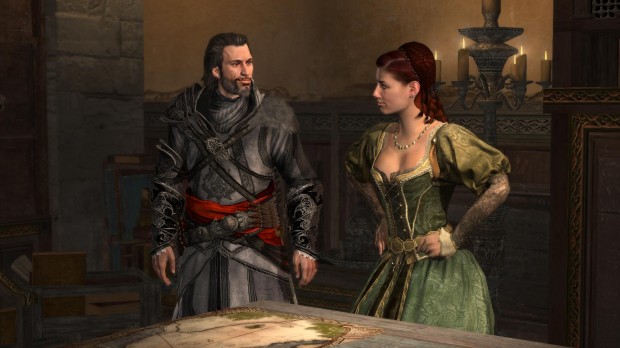 Some of you out there who’re familiar with the series may find yourselves asking, “Well, exactly how similar is Revelations to its predecessors?” Those of you who’ve watched Revelations’ gameplay trailers will have a rough idea at what I’m getting. For the benefit of those who haven’t, let’s just say that if, themes and settings aside, you placed Revelations, Brotherhood and Ac 2 next to one another, the only notable difference you’ll pick up is a very subtle graphic improvement on the part of the series latest installment. As I’ve mentioned, the games even play the same in terms of controls, mechanics, routines and content structure. In essence, Revelations comes off more as a long-awaited expansion as opposed to a brand new game altogether. 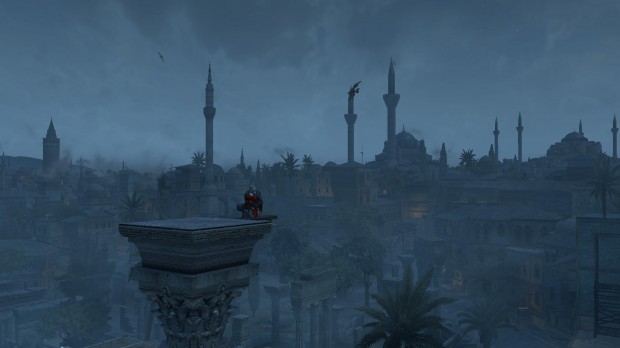 I’m not saying that the likeness is necessarily a bad thing. The aforementioned similarities in graphics, style and gameplay help to create a heightened sense of continuity. I, for one, having played every major AC title to date, upon entering Revelations, felt as though I never really left the series and its games. Although it’s been months since I last touched Brotherhood, filling the role of Desmond, Ezio and Altaïr felt extremely natural to me. I was immediately able to pick up on the player characters’ skills, strengths, weaknesses, limitations and equipment sets. Beyond that even, I found myself somewhat attuned to Revelations’ level design and was able to very easily identify climbable perches, scalable walls, view points and environmental threats. Figuratively speaking, I felt as though, from playing the games in the series, I had gained as much in experience and skill as Ezio had over the years. You could even say that I was somewhat under the effects of the much referenced Bleeding Effect. 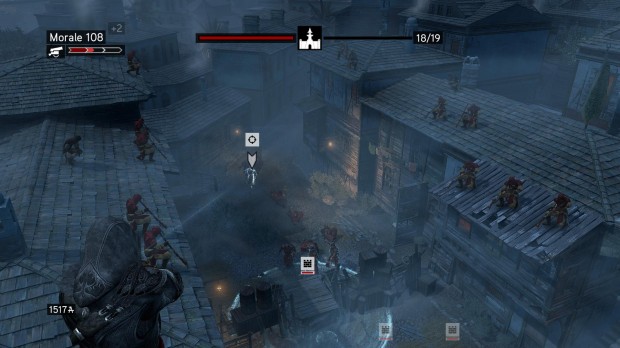 For all its similarities to Brotherhood and the like, Revelations does bring to the table a couple of new features worth mentioning.

To start with, players will be introduced to a couple of new mini-games in the form of a Portal-esque puzzle platformer and a tower defense of sorts. Due to their involvement with Revelations’ key plot elements, I shall not reveal all too much about their nature or their integration with the storyline. What I will say about them, however, is that both mini-games make for a comfortable and occasional change of pace, not to mention being casually fun in their own right. In the grand scheme of things though, despite their varied involvement with the plot, they do feel kind of tacked on, somewhat detached and at their worst, might be annoying to some. Ultimately, the mini-games were nice to have, but largely arbitrary. 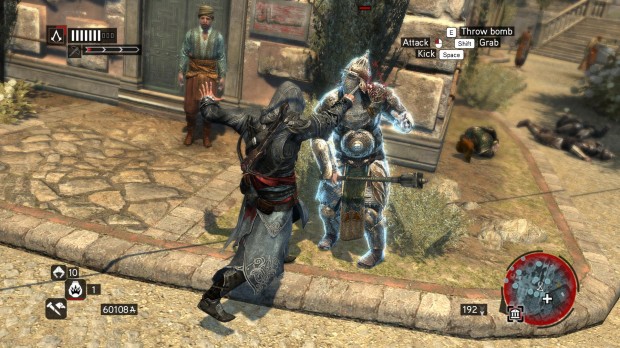 New mini-games aside, Revelations also brings to us a couple of new additions to Ezio’s arsenal, namely bombs and the hook blade.

Let us now take a moment and put a couple of things into perspective here. Not only is Ezio an aged man of fifty and counting, he’s also the Mentor of the Assassins. As the master of an entire order, it only comes fitting that the challenges and opponents you’ll face in Revelations seem somewhat tougher, partially due to the fact that Ezio, grey beard and all, does seem to have lost some manner of speed and agility. Thankfully, the game doesn’t put you in an annoying “forced restart” scenario and allows you access to most of Ezio’s standard load out – knives, hidden gun, sword, darts, etc. – right from the get go. It all sounds fine and dandy and all but the bombs and hook blade, when introduced, do make some measure of a difference in how the game is played.

Ezio’s new equipment, while primarily offensive in nature, do also serve very utilitarian purposes and bring some much welcomed diversity to a mode of gameplay that long time fans and players may be sorely used to. It’s entertaining and a little refreshing to say the least, albeit still not quite enough to make the game stand out from what the series has offered so far. 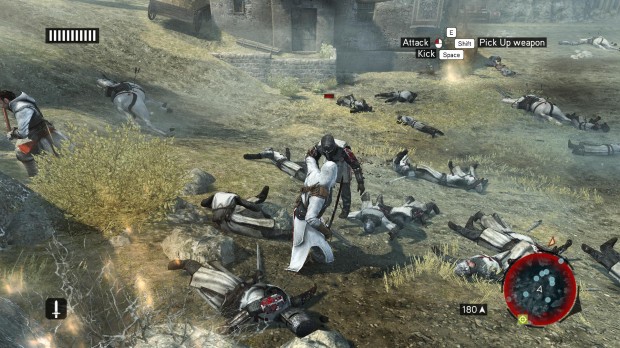 By this point in the review, if you’re still expecting Revelations to be something exceedingly different or even remotely “out of the AC box” so to speak, you’ll likely be disappointed. I can’t stress this enough but AC 2, Brotherhood and Revelations are, loosely speaking, the same bloody game. However, what has always been the heart of Assassin’s Creed, I find, is it’s storyline and sure enough, Revelations does impress. Without taking future DLCs into consideration, the game is a little on the short side in terms of story and content, doesn’t hold as many secrets and seems to place less focus on exploration. Regardless, what Revelations has going for it is the fact that it is the final noteworthy chapter of Ezio’s story.

Compared to Brotherhood, the story Revelations tells feels somewhat tamer, but carries a great deal more weight. It is symbolic, in a sense, and by shedding new light into both Desmond’s and Altaïr’s life, the game does neatly tie together as many loose strings as possible by the game’s end. As with every major AC title that has come and gone, Revelations ends with its own fair share of shockers and plot twists along with a bit of a cliffhanger that shuts the door on one story – Ezio’s – while at the same time opening the doors on numerous other possibilities.

Come what may, rest assured that Assassin’s Creed is far from over and with luck, we’ll soon see Desmond follow the path of his ancestors and definitively put an end to the secret war and save mankind as we know it. 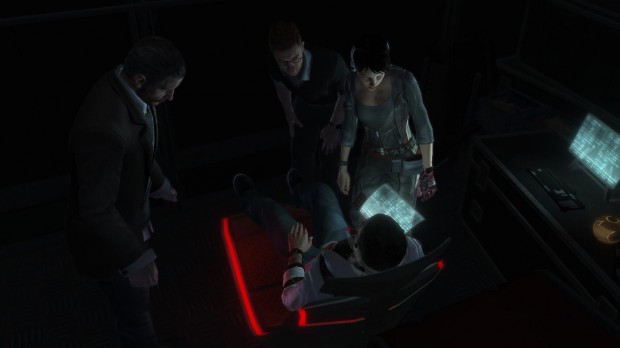 Verdict: Buy this if you’re a fan or long-time follower of Assassin’s Creed and have played all their major installments to date. If not, I highly recommend starting with the first Assassin’s Creed. As for players who’ve finished Revelations, you may wish to look up Assassin’s Creed Embers for final closure on Ezio’s story.

Assassin’s Creed: Revelations is available on PC, 360 and PS 3. It may be purchased from your local games retailer or off Steam for PC users. The author finished the campaign with 90% Synchronization over the span of two days and is currently level 16 in Revelations’ multiplayer mode.