Two weeks ago, I watched the last episode of Walking Dead before the show went on hiatus. It seems I can’t escape the undead for long; Capcom released a hint of more zombie-hacking action through a post on the official Dead Rising Facebook page yesterday, while Siliconera reported on possible plot details for Dead Rising 3.

According to Siliconera, Dead Rising 3 apparently has nothing to do with original Dead Rising protagonist Frank West, contradicting the Facebook update from Capcom (pictured above). Instead, we’ll see car mechanic Rick (pictured below) and a merry band of survivors deny the never-ending horde of zombies from sampling delicious cerebral matter in the fictional locale of Los Perdidos, California. He will have to escape the Zombie Apocalypse by repairing a plane before a massive bomb in the city goes kaboom. Nothing gets you in the mood for repairs better than knowing that you’re moments away from Tsar Bomba exploding in your backyard. 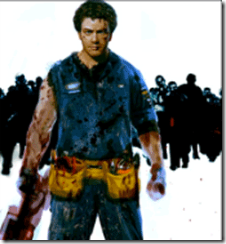 Of course, what would a zombie game be without a backstory that has nothing to do with the fine act of bludgeoning corpses? The “Illegals”, led by a man named Red, are an underground group of infected humans not identified and registered by the Government. It’s not readily apparent whether these “Illegals” will be friend or foe to Rick’s escape, but creating a game with the subtext of illegal immigration could be a touchy issue. Then again, Capcom’s no stranger to controversy regarding presenting social issues in games. I do not wish to see them wasting time needing to defend their position again, I’m sure they’ve learned a thing or two with their Resident Evil 5 racism fiasco.

Oh who are we kidding, since when did any of us care about the storyline for any of the previous Dead Rising games? All we want are more zombies, more weapons to kill them with, and more zany over-the-top One Piece-like enemy bosses to battle with using the aforementioned new weapons (Siliconera’s report tells of a motorbike with a steam roller attached to the front – sounds promising already!).

While Siliconera’s report and the Dead Rising Facebook post does not seem to have any connection with each other, I’m speculating that Frank might appear as a cameo in the game, if not in a bigger role. Still, treat this as rumour until Capcom comes out to officially confirm the development of Dead Rising 3.

Lead 4 Dead to be released on 4th November