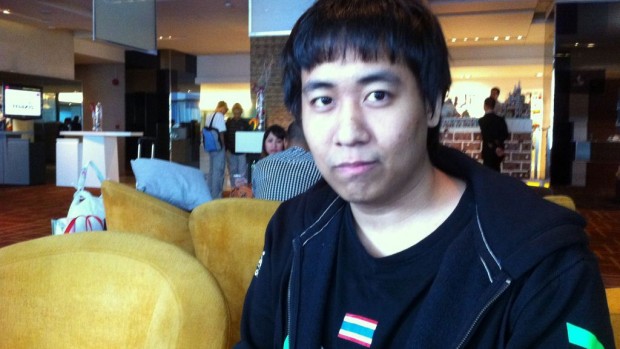 I managed to catch up with Thai Dota team MiTH.Trust’s captain Trai “TnK” Akaravinak as they were checking into their hotel at the Kuala Lumpur Convention Centre this afternoon. It was a short, impromptu interview, but I managed to hear a little about the team’s thoughts and feelings about the Dota 2 Malaysia Invitational tournament this weekend.

Which teams do you think will be your biggest challenge in this tournament?

Mineski, Orange and MUFC, these three teams will be our biggest challenges.

Are you worried about Mineski because of their performance at last weekend’s SMM?

Yes, we actually just lost to them at SMM. As for Orange and MUFC, they have very strong lineups that are very effective. I think it will be very hard for us to handle them.

Did your team face any challenges in the preparation for this tournament?

We did not have enough time to train a lot, but I think it’s OK. We did have a bit of time to train together, we had a training camp too.

So how long did you manage to train for?

Since we get back from SMM (last weekend), we had to take care of our home affairs and our studies in university. We only had time to train for about one week, but it was really a lot less than that.

Are you tired from last week’s SMM? It was a major tournament after all.

Yes, we are a bit tired.

Do you think that will affect your performance in this tournament?

No, it will not affect our performance of course.

So tell us, what are you aiming for this weekend?

Well, we always aim to be the champions. But I would say we’re looking to get to the top four at least.

Interview with M_Flo about his beginners’ tournament