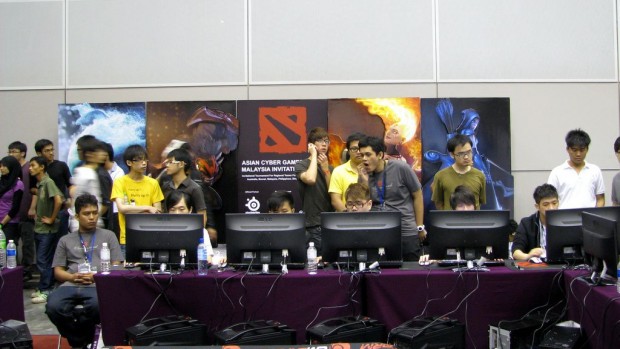 There were no upsets at the Dota 2 Malaysia Invitational as the tournament favourites won their first round of matches this afternoon at the Kuala Lumpur Convention Centre.

The Dota 2 double elimination tournament — held within the grounds of the Comic Fiesta animation, comics and games convention — sees eight teams from five countries competing for a share of the US$10,000 prize pool. The teams are:

Mineski, Orange Esports and MiTH.Trust are the current tournament favourites due to their strong performances at recent tournaments and stellar lineups and they did not disappoint, defeating all their first round opponents with ease.

Today also marks the first time the MYM.Dota team has participated in a tournament in over two months, with their last appearance being at ESTC 2011. Their roster has gone through a drastic change, with team captain Benedict “hyhy” being the only member retained from the original lineup. MYM.Dota’s roster at the Dota 2 Malaysia Invitation includes:

I managed to speak briefly hyhy, who told me that the significant lineup change was due to the former players having to serve out their national service commitments. hyhy also revealed that Wei Poong “YamateH” Ng, who recently made the move to Malaysian Dota team Orange Esports, was “never really” part of MYM.Dota.