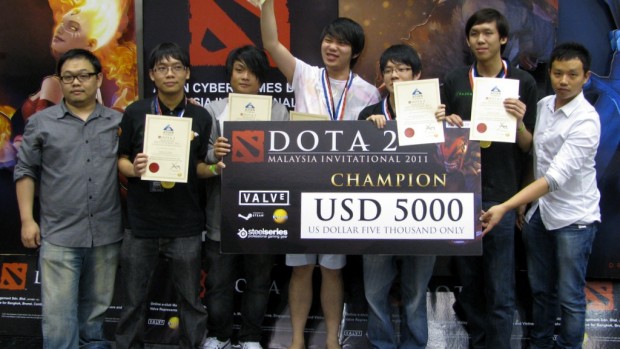 Malaysian team Orange Esports defeated Thai team MiTH.Trust 3 – 2 in an epic seven-hour best-of-five grand finals to earn US$5,000 (S$7,000) for themselves and be crowned champions of the Dota 2 Malaysia Invitational, which concluded Sunday night at the Kuala Lumpur Convention Centre.

All signs were pointing to a swift victory for Orange Esports after they won the first game of the series, which — together with the one-match advantage received from their upper bracket finals win — meant that the Malaysian team only had to win one more match to win the entire tournament.

MiTH.Trust, however, soon showed that they would not go down without a fight. In the second game, a small tactical error in the 28th minute by Orange’s Batrider and a brilliant Fissure stun by MiTH’s Earthshaker resulted in three kills for the Thai team, which was all they needed to win.

In the third game, MiTH.Trust switched from an aggressive play style to a cautious and defensive one, which soon paid off as MiTH’s overfarmed Anti-Mage carried them to victory despite the Thais being behind Orange Esports in hero kills throughout the game.

There was to be no fairy tale ending for MiTH.Trust however, as Orange refocused for the last game and dominated for the most part. The resistance went out of MiTH.Trust’s after Orange destroyed their bottom barracks at the 34 minute mark, and MiTH.Trust conceded the game soon after, ending the game at 36 minutes19 seconds, with hero kills standing at 24 – 5 in Orange’s favour.

“We were pretty happy with our performance for the first match as everything was under control,” Orange Esports team captain Litt-Binn “Winter” Chan said of the grand finals series. “But we knew that we still couldn’t relax after that as we still had one more match to win. Unfortunately, we lost the next two matches and we were forced to work very, very hard to win the tournament.”

MiTH.Trust team captain Trai “TnK” Akaravinak was satisfied with his team’s performance: “Really, I’m satisfied. I thought we’d only be top four but we took second place, so I think we did ok.”