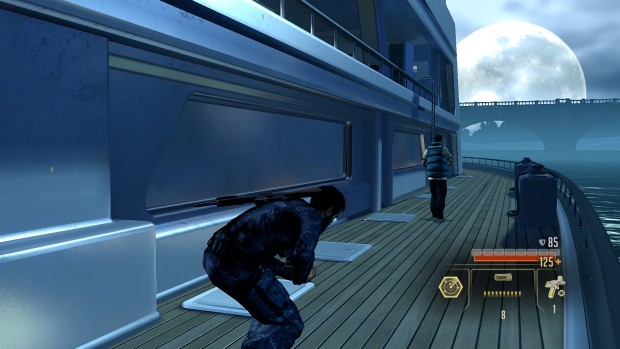 A few months ago, Alpha Protocol was part of a sale where all Sega titles were heavily discounted. Even though I had heard about the negative reviews this title had garnered, I was determined to give it a try since Alpha Protocol was being sold at a discounted price of only two bucks. While not spectacular, I found that the game was a diamond in the rough.

In Alpha Protocol, you take control of Michael Thorton, an American spy who travels around the world in order to foil a plot by Halbech Corporation, an international defence company. Halbech Corporation wants to manipulate world events to trigger a nuclear war between China and the USA, which threatens millions of lives in the world. The general premise has been covered by so many games and films that it already felt dreadfully old by the time my character sent on his first mission. While the story itself is dull, the story development is surprisingly well-executed, with the plot twists keeping me on my toes as the story progressed.

Alpha Protocol is essentially two games in one package. There’s the broken third-person perspective action gameplay and the very well-made interactive dialogue system. Oddly though, the two aspects of the game do not feel disconnected from each other. It felts like I was playing a mediocre third-person shooter and a really impressive interactive movie simultaneously. Needless to say, I enjoyed the story much more then the gameplay itself — but first, more on the gameplay.

Thorton will be what the player wants him to be. He could be a stealthy character, revelling in the shadows and taking down foes quietly. He could be a heavily armoured soldier that mows down his foes with devastating weaponry. Or somewhere in between. A skilled player could even complete the game as a pacifist without causing any deaths. The way you go about doing your mission has an impact on how others treat you. For example, running and gunning would lead to your handler commenting on your “reckless behaviour” while performing your mission stealthily would impress the same person, praising your skills as an agent. Although this is not important to the gameplay, it really helps with character immersion by making players feel rewarded/punished by their actions. 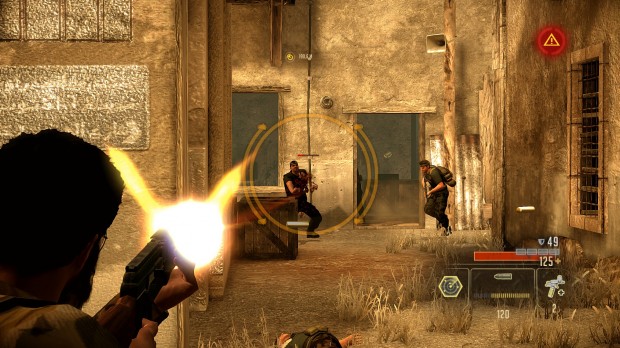 On a side note, if you’re one of those people who enjoy toting guns and causing all-out chaos, you might be a little disappointed with the shooting mechanics. Your firepower and accuracy is heavily dependent on you accumulating enough experience points to improve your efficiency with various types of guns. Hence, in the earlier levels, you’ll be firing your guns in frustration and wondering why none of your shots hit their intended targets. For an action-filled RPG like Alpha Protocol, I felt that having to level up a skill that directly affects your accuracy is inappropriate. The gunplay system in Mass Effect 2, which was released half a year before Alpha Protocol, would have suited this game much better. In Mass Effect 2, most of your shots do not miss, whereas in Alpha Protocol, you need to invest in the Small Arms skill in order to get any form of accuracy.

There are several boss battles in the game, but only one was worthy of mention. The fight against Russian mob boss Konstatin Brayko was the best action set-piece in the game. Autograph’s hit song “Turn Up The Radio” plays as you go head to head with him in a psychedelic, heart-stopping encounter that culminates in one of the most exciting boss battles the last decade of games had to offer. Words are not enough to describe the atmosphere that is present in that encounter. Unfortunately, the other boss battles are pretty standard stuff, with bosses having a large health pool and being immune to melee attacks, as well as having constantly spawning minions to assist them.

Besides the majority of boss fights, there were also some other horrible gameplay areas which felt very bland and uninspired and that sometimes does not make sense. For example, enemies can rush towards the player to punch him, only to retreat immediately, firing blindly. There is a sense of “been there, done that” even when arriving in new areas. I found myself rushing through the game in order to continue with the tale.

… But a fantastic interactive conversation system

In the end, the very well-made interactive dialogue system somewhat makes up for the lacking gameplay, turning a mediocre third-person shooter into a really impressive interactive movie. The dialogue system in Alpha Protocol is an almost perfect example of how conversation in video games should be handled. It is in fact the most important part of Alpha Protocol as it gives the player a sense of actual freedom that is not found in the action elements of the game. This is where Alpha Protocol surprises me, with the amount of polish that went into it.

What you say and your tone to other NPCs (Non-player characters) have a huge impact on the ongoing conversation as well as the story. New story branches may be opened depending on what you say. For example, you could choose to show mercy to a terrorist leader that you are supposed to kill-he would be grateful for it and help you in your other missions. Or you could kill him, and lose potentially useful information that is beneficial to the some missions. The choices that you make for Thorton could potentially make or break him. 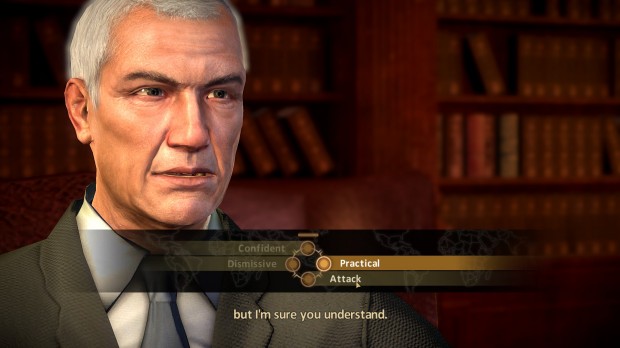 The game does not feature eye-popping visuals that most gamers nowadays rave about, but it makes do with carefully selected tilesets and themes that complements the game. Overall, most of the locations in Alpha Protocol are well-designed and aesthetically pleasing. The animations of human models are fluid but very awkward. The way that Thorton crouches is unbearably ugly and awkward. Thorton moves like an old man without his walking stick while crouching. It is an eyesore that annoyed me.

Fittingly to the whole interactive movie feel of the game, the voice acting is nothing short of spectacular. Voice actors fit their virtual persona perfectly. As this is a narrative-driven game with tons of cutscenes, voice acting is consistent across the board. Guns sound like they should, packing a powerful punch. The soundtrack for the game is mediocre, consisting of tracks that did not leave a lasting impression in my head. There is no memorable piece of music that I could identify with, with the exception of the clever selection of music for Konstatin Brayko’s boss battle. However, I would say that the soundtrack is not crucial to the enjoyment of the game.

Verdict: If you can look past Alpha Protocol’s clunky gameplay mechanics and focus instead on the well-crafted storyline, the convincing characters and the awesome dialogue system, you’ll be in for one hell of a ride.

Alpha Protocol is available on PC, 360 and PS 3. It may be purchased from your local games retailer or off Steam for PC users. The author finished the campaign once.