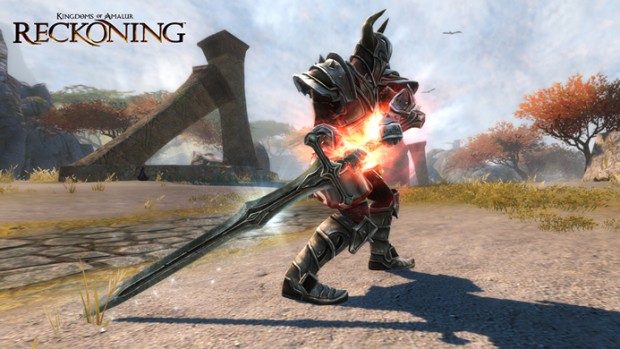 With 2011 over and 2012 just beginning, here’s a look at the top five PC games I’m personally anticipating for the year.

As a fan of R. A. Salvatore’s books (specifically The Dark Elf Trilogy), I was delighted when Electronic Arts announced that Salvatore himself would be creating the game universal and lore for Kingdoms of Amalur: Reckoning. Additionally, Ken Rolston — the lead designer of The Elder Scrolls III: Morrowind and The Elder Scrolls IV: Oblivion — will act as the game’s executive designer while Todd McFarlane — creator of  the Spawn comic book series — will work on the art direction for the game. Looking at the big names helping to create the core game experience, and from the gameplay videos that have been released, KOA: Reckoning looks set to impress in 2012.

Mass Effect 3, the epic conclusion to the Mass Effect trilogy, will focus on the Reaper invasion of Earth and the galaxy. While the game has been touted as a fitting end to the series, looking at Dragon Age 2 — which I thought was a mediocre game that did not live up to its predecessor — I have a sick feeling in my stomach that Mass Effect 3 may turn out to be a commercial success but a critical flop. Having gone through multiple playthroughs on both Mass Effect and Mass Effect 2, I really hope Mass Effect 3 does not disappoint.

There are few games as hotly anticipated as Diablo III.  It has been slightly more than a decade since Diablo II: Lord Of Destruction, the last instalment in the Diablo series was released. Based on the numerous gameplay footage that has been released, it seems that Diablo III has got what it takes to become a worthy sequel to its highly acclaimed predecessors.

The third instalment in the Max Payne series features an older, much more world-weary and worn out Max. The game will be set in the city of Sao Paolo, Brazil, where Payne is working in the private security sector. Rockstar Games has said that Max Payne 3 will cost more than US$100 million to develop. With Rockstar known for its high production quality and with them throwing that amount of money into a game, we should be expecting quality for this title, despite the controversy over the game’s setting.

After the highly successful Borderlands, whose gameplay resembles a first-person shooter version of Diablo, developer Gearbox aims to bring in smarter AI and a fully connected world featuring transparent and seamless loading in Borderlands 2. The sequel is set five years after the events of Borderlands and will also feature four classes.