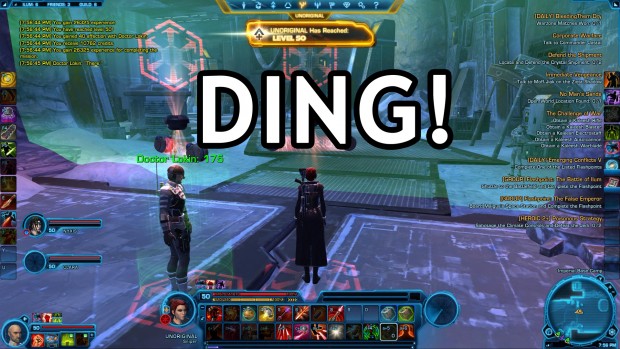 The Old Republic has been out for a little over a month now and with Bioware rolling out gradual improvements over the months to come, there really is no better time to pick up your blaster – or lightsaber – and set forth on an epic intergalatic  adventure. Understandably, the galaxy may be a daunting place for some so here are a handful of pro-tips that’ll get you on the fast track to the big five-zero.

This tip almost sounds a little too obvious, don’t you think? Companions are great to have but having another warm body around while leveling makes a world’s worth of a difference in your progression speed. You’ll essentially kill faster, die less and complete missions at a faster rate than you would alone. On the plus side, The Old Republic also incentivises player groups by dishing out bonus experience points for players who help each other complete bonus objectives. As another added bonus, leveling and completing missions as a group will net you a significant amount of social points. I, myself, have run into players who’ve attained social rank V simply from leveling to fifty with a friend. It’s pretty amazing, if you ask me. Seriously though, if nothing else, the single most important thing you should take away from this guide is that leveling in a party works exceedingly well and if you aren’t doing so, you’ll only hold yourself back.

Quite early on in the game, you’ll be given the option to queue for PvP Warzones. Participating in these warzones will net substantial rewards spanning valor (the experience point equivalent for your PvP rank), warzone commendations (for the purchasing of PvP gear), credits and experience points. Depending on the outcome of a warzone, you might receive between seven to upwards of ten thousand points of experience. It’s a great way to shake things up a little, especially if you find yourself a little bogged down by the seemingly endless chain of missions. Also, if you intend to regularly PvP at level cap, you’ll want to get in some practice and rake in some early valor ranks and commendations. It’s fast and altogether very rewarding. Why the hell not?

Much like the chores we so hate in real life, completing daily missions can get so painfully tedious at times. At low levels though, the experience rewards are definitely worth the effort. Completing your PvP and space combat mission dailies take little time out of any hectic schedule and easily rewards you with anywhere between seven to upwards of ten thousand points worth of experience. Heroic missions are also available on a daily basis if you’d care to complete them but as you’ll see in Pro-tip #6, they aren’t always worth the trouble.

You are only as strong as your weakest companion. This is especially true for classes that need to run with either a tank or healer companion. It’s generally a good idea to keep your companion’s gear up to snuff with either mission rewards or low level PvP gear. On the side, if you happen to have picked up a crew skill that’ll net you a steady stream of gifts, consider pampering your companions a little. Doing so raises their affection rating and unlocks “talkie” quests that take place solely on your ship and can potentially reward a good  anywhere between ten to fifteen thousand points worth of experience.

Pro-tip #5: Leave those Flashpoints behind

In truth, The Old Republic’s flashpoints are great fun and have a tonne of flavor riding on them. If you’re a huge fan of the KOTOR series, you’ll especially want to take on instances such as the Foundry. Sadly though, flashpoints are very time intensive and aren’t effective in terms of experience points. For those of you intending to make a mad dash to The Old Republic’s level cap, you’ll want to give the low level flashpoints a miss and return once you’re ready to take on the heroic versions at level fifty.

The heroic missions – marked as 2+ or 4+ – are entirely optional. They’re great for experience points and gear rewards but they have absolutely no bearing on a character class’ storyline. They’re also quite the hassle to complete if you can’t get yourself into a strong group. This is, of course, where Pro-tip #1 comes into play. Having a regular leveling group will easily get you past any heroic missions The Old Republic will hurl at you. On the other hand, if you’re the kind of player who prefers to go it alone or, you’ll probably want to give these time sinks a miss and move on.

As it happens, The Old Republic is one of the easiest games to level in that I’ve come across in more than seven years of MMO gaming. If you’re having trouble getting yourself to level cap, have a go at some of the tips offered in this little guide. If things still don’t work out for you, then all I can say is that YOU’RE DOING IT WRONG!