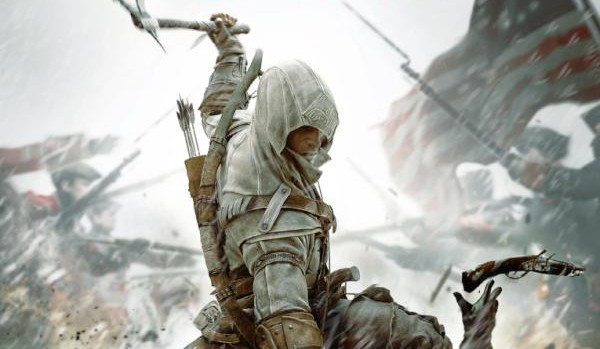 Update (2 March): Ubisoft has responded by releasing an image of the official PS3 box art for Assassin’s Creed III on their Twitter page. The same artwork will be used for the Xbox 360 and PC versions.

Original: While Assassin’s Creed III’s 30 October release date for consoles had been unveiled a few weeks ago, Ubisoft is still maintaining a tight lid on the anticipated sequel. Well, all of that changed today as the Internet has suddenly exploded with freshly leaked promotional artwork for ACIII.

The first image was sent to gaming news blog Kotaku by a Best Buy employee. It shows a Native American carrying a bow and arrow, tomahawk axe, and standing in front of the 13-star US continental flag.

The second image was accidentally leaked by Game Informer, appearing as a website banner. The image has since been taken down from the site, but fortunately the folks at Toastervision had managed to save a screenshot of it. It shows the same Native American character, standing beside someone who appears to be George Washington.

These two leaks all but confirm that ACIII will be set in 18th century Colonial America, a drastic change in setting and time period from ACI’s and ACII‘s 14th-15th century Italy. A Native American assassin? Very intriguing I would say.

Ubisoft are scheduled to release an official announcement about the title on 5 March, so expect more details about the game to be revealed by then.

What’s in store for Assassin’s Creed in 2012