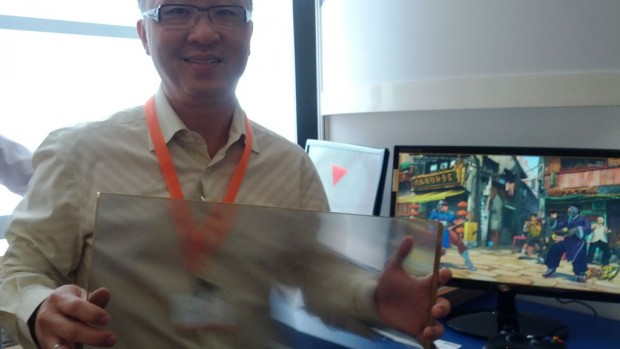 The company, which has its headquarters in Malaysia and an engineering base in Germany, debuted the product at the DEMO Asia tech conference in Singapore and is planning to market the conversion kit to gamers.

The VisuZ filter performs its magic in a two-part process. First, the custom VisuZ Gamer software driver takes Direct3D graphics from games and converts the output into stereoscopic video. Next, the chromatic light deflector optical element bends light to delivers a separate image to each of your eyes, creating a 3D effect without needing glasses of any sort.

While a glasses-free 3D display is hardly new technology, a kit that allows any existing display to be converted into one is something new. Unfortunately, due to the necessity of the software driver, the kit will only work with PCs, specifically games that use Direct3D — the minority of games which only use OpenGL or other graphics APIs will not be supported.

According to 3D International’s Chief Technology Officer Ambrose Peter Nari, commercial production of the VisuZ will begin by the end of March, with the target ship date being by the end of April. The VisuZ will first be made for 22-inch monitors, before being adapted to larger sizes.

3D International will initially work with Samsung to bundle the VisuZ with LCD monitors, with an eye on making the filters will be made available for purchase separately in the future.

Chief Marketing Officer Alfred Chong (pictured) said that the price of the VisuZ will be between US$100 and US$200 at retail.

The VisuZ will also be exhibited on 5 March at the Game Developers’ Conference in San Francisco and on 6 March at the CeBIT tech show in Hanover, Germany.