The prizes for the Singapore national qualifiers of the Soulcalibur Impact 2012 tournament have been revealed, and yes — there are about S$10,000 worth of prizes, although there’s no hard cash involved.

The biggest prize, worth some S$5,000, is the paid flight and accommodations in London to participate in the Soulcalibur V Impact Tournament Grand Finals on 17 March 2012.

And even if you can’t beat the veteran Soulcalibur community in the main tournament to win that trip to London, there are decent prizes, such as Xbox 360 consoles and arcade sticks, to be won in the Second Wind & No Pros tournament — where you’ll be given a second chance to win even if you’ve been eliminated from the main tournament.

And as if the prize overload wasn’t enough, you can win prizes even if you don’t participate in the tournament — simply RSVP for the event on the tournament’s Facebook event page and you’ll get one shot at the raffle prizes!

The tournament will be held on 3 March at the [email protected] entertainment centre. Don’t miss it. The full list of prizes are listed below: 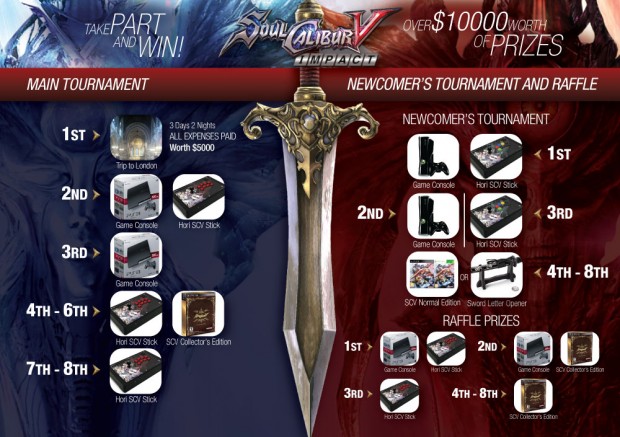 We previously reported there being a Newcomer’s and Beginner’s Tournament, this is untrue. Instead, there is a Second Wind & No Pros Tournament for people who have been eliminated from the Main Tournament. More details are available on the Soul Singapore website.