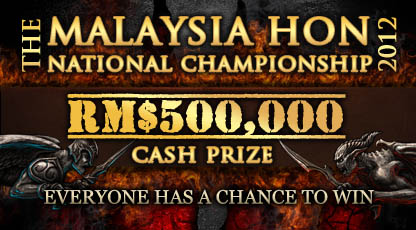 Garena will launch in April this year the Malaysia Heroes of Newerth National Championship 2012, a RM500,000 (S$209,000) prize pool Malaysian-only tournament which will feature the highest ever prize pool in Malaysian esports.

There will be a total of 16 different qualifiers played over the course of eight months in six different states in Malaysia – Kuala Lumpur, Selangor, Penang, Perak, Johor and Sarawak. There will also be an online qualifying tournament. Each qualifier will end with a RM10,000 (S$4,180) winner-takes-all final.

Registration for the event will be made open to players of every league. The victors of each qualifier tournament are blocked from participating in subsequent events, so defeated teams will stand a chance to make a comeback in later qualifiers.

“We see a great deal of potential for growth in the Malaysian gaming community, and would like to build the esports scene by creating more opportunities for players to compete at a global scale,” said, Forrest Li, Chief Executive Officer of Garena.