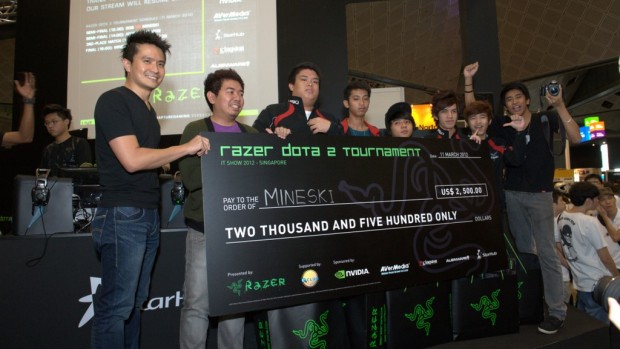 Mineski (the Philippines) edged out Orange eSports (Malaysia) in the finals of the Razer Dota 2 Tournament on Sunday to win the US$2,500 cash cheque and US$3,604 worth of merchandise at IT Show 2012.

Sing Chi “DPM” provided commentary for the four-day tournament, catering to both newcomers and veteran players. She explained the basics of Dota 2 as well as discussed the more advanced plays made by the tournament teams in a way that was clear and easy to understand.

The tournament, held at the Suntec City Convention as part of IT Show 2012, marks the first time in recent memory that Razer has been the headline sponsor of the competitive tournament and is part of a bigger effort by Razer to support the esports ecosystem in Southeast Asia, according to Razer CEO Min-Liang Tan.

“We have seen the e-Sports movement grow and thrive in countries like the US and China where esports has become mainstream in the last couple of years and we were involved in that effort,” said Min-Liang. “We aim to do the same here and lead the way forward in this region.”

Mineski intensely concentrating in the finals

Razer booth babes, getting the attention of many a male gamer

A packed crowd closely watching the finals infront of the stage