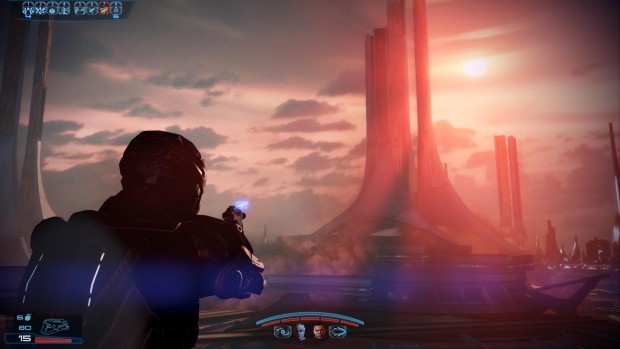 Mass Effect 3 brings about the conclusion of the Mass Effect series, which was well received by gamers and critics worldwide as evidenced by the Metacritic scores (which aggregates review scores from numerous gaming websites and magazines) of the previous two games, Mass Effect and Mass Effect 2, is 89 and 94 respectively.

Hence, it was no surprise that the final game of the trilogy was hotly anticipated and gained much attention from the press and players alike. But is Mass Effect 3 a fitting end to the series? Without giving away too much, I’ll just say that it seemed to be that way up until the end, where things really went sour.

The gameplay of Mass Effect 3 largely stays the same as its predecessor, Mass Effect 2. It’s standard third person shooter fare, really. Pop out of cover, fire at the enemy, go back into cover, reload. Rinse and repeat.

One fault I found with the combat system is that there were so many combat actions bound to the spacebar. The spacebar is used to quick-roll away from enemy fire, stick to cover, sprint, vault over obstacles, pick up items and talk to people. I found my Shepard (the main star of the game) dying needlessly sometimes because of this unwieldy control scheme. Believe me, it will frustrate you. 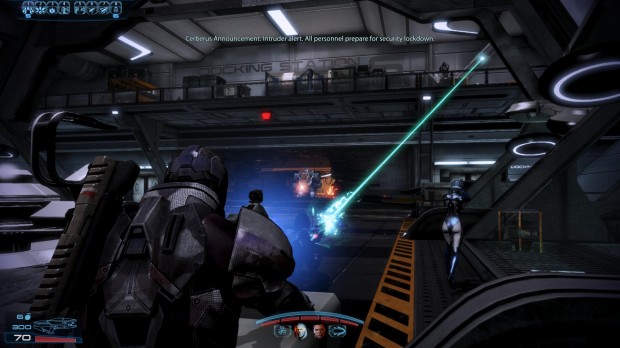 Firing weapons gives you a great sense of satisfaction — you can really feel the guns packing a punch, thanks to ME3’s really neat audio effects. However, I felt that some enemies took too many bullets to take down, which can be frustrating to players.

During missions, you can choose two squad members to help you out in combat situations. I felt that they were mostly useless. Even Garrus, who is supposed to be a sharpshooter, misses on such a frequent basis that at times I felt like I was the only one doing damage. However, players can pause the game and make use of the squad’s special abilities, which are useful in many situations. The squad AI tend to use the powers with precision though, so players do not need to worry about any form of micromanaging.

Besides using weapons, one can utilize Shepard’s biotic powers (depending on your class, you may not have any) in the battlefield. Biotic powers are more interesting than using guns, with interesting abilities such as Singularity and Slam, which are a blast to use. Combined with the appropriate biotic skill upgrades that are available, one can literally use only biotic powers to get through the game.

The enemy AI is simplistic, only flanking the player occasionally, and does not really provide much challenge in the game. Enemies also tend to target the player only, to the exclusion of all other immediate threats, which is irritating AI behaviour. However, the game is easy enough that even with that, it is pretty rare for Shepard to die.

That pretty much sums up the gameplay aspect of ME3 — good, but not outstanding or unique in any way.

New to ME3 is the Galactic Readiness rating, which is solely determined by the multiplayer aspect of the game, as well as ME3‘s various iPhone/iPad applications. It will affect (to an extent) the final ending. In order to increase it, one must spend more time in multi-player as well as use the various iPhone/iPad applications. It is advised to boost Galactic Readiness to 100% in order to unlock a hidden scene at the end. 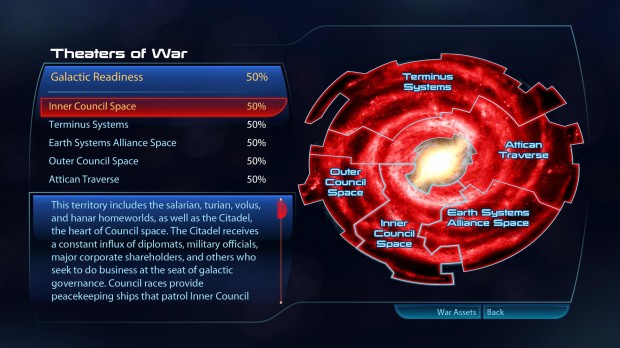 This is one aspect of the game that I absolutely loathed. I believe that a single-player experience should be solely single-player and not be affected by outside factors. Besides, the multiplayer is really boring. Enemies come in waves, and up to four players must hold the line till evacuation. With combat gameplay not a particularly strong aspect of ME3, I expect players to get bored of this very quickly

Scanning planets for resources, an aspect of the game that was introduced to gamers in ME2, returns in ME3. The scanning portion in ME3 is just as irritating and boring as it was in ME2. The only motivation to scan planets was the pointless mini-sidequests that contributes a little to the final outcome of the game.

Scanning is only available after sending out scanning signals, which increases the “Reaper Threat” bar. Reapers chase your ship around the Galactic Map after sending too many scanning signals. When they catch up to your ship, the game forces you to restart the scanning process all over again. It’s tedious and something Bioware could have left out.

For players who had the chance to play the previous ME games will be thrilled to know that Conrad Verner, who idolizes Shepard, makes a hilarious appearance in ME3 which certainly adds humour to the game. However, take notice that as strange as it sounds, I felt that the major choices from the previous two games did not make as much impact on the story compared to the minor choices. 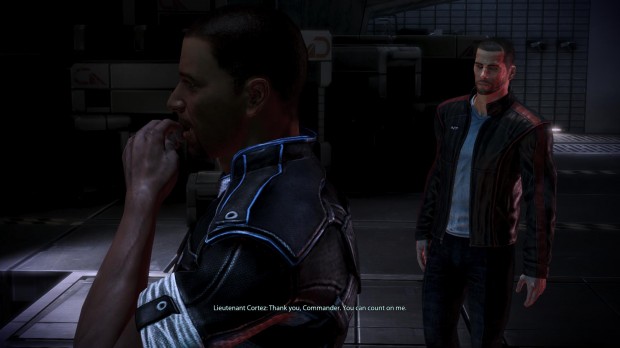 One thing of note: Every sequence up till the ending was epic and well made and well told. The new squadmates introduced were interesting and their backstory was enjoyable. The threat of the Reapers as depicted in the game felt urgent and real.

The ending was so disconnected to the story itself, though, it seemed that Bioware rushed the game out before even completing it. However, after the credits, it was teased that there will be post-ending DLCs in the near future.

So gamers, hold your breaths. The ending may not be set in stone yet.

Buying all available Mass Effect 3 DLCs will cost you over S$1,000

Is that you Snake? Oh, it’s just my Mass Effect Orders!