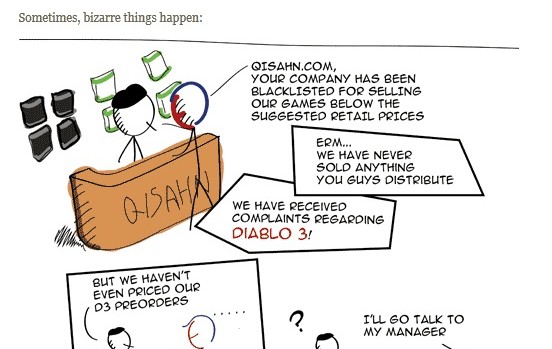 Update 3 (26 March, 11.37pm): The latest twist in the tale appears as Qisahn notes on their FaceBook page that the ban was “miscommunicated” to them. They have since taken down the original blog post for the special $65.90/RM160.

Seems like a misunderstanding that blew up in everyone’s faces. If we get more news, NGNT will be here to report it.

Update 2 (26 March, 11.20pm): In a lengthy email reply to our queries, Qisahn.com have related its side of the story to NGNT.

Qisahn’s reply suggested that he acted out of a frustrated need to begin selling the hot title before other competitors ate into the pie. At the same time, a puzzling few lines from owner Qishan Soon claim that Asiasoft has indeed banned him from selling the game, albeit indirectly. If there are more updates, we’ll be sure to bring them to readers.

“I approached Asiasoft last year, and a salesman answered my calls and registered my account…. I first knew (Asiasoft) had opened preorders (for Diablo 3) on the 14th of March. Asiasoft did not inform me. I asked the salesman for pricing, but did not make any commitment as I had better ties with the sub distributor and the prices are the same.

On March 16th I confirmed my order with the subdistributor… One hour later, the subdistributor messaged to say he couldn’t sell me (the games) as Asiasoft called them to inform them that (Qisahn) was banned. (Emphasis ours)

I called the Asiasoft salesman the same day… he said he would try to talk to the manager… and it’s not an issue. I pressed him for a reply date and was told early next week… On the 22nd I called, and the salesman said he would get his manager to return the call by the 23rd. She didn’t call the entire day, and I did what was in the best of my interest.”

Qishan signed off by noting he has accepted the ban if it were to stay in place.

“(Asiasoft) can decide who they want to ban, there is nothing wrong with that. I whine, but at the same time, I accept it.”

In the meanwhile, it may look like Qisahn may yet have the last laugh, as gamers noting the news openly wondered if they could cancel their pre-orders to get in on the company’s rock-bottom pricing.

Update (26 March, 5pm): In a statement from Asiasoft’s PR, Leslie Lin, Asiasoft has responded to the allegations from Qisahn.

“Qisahn has not been rejected for the possibility of selling Diablo 3. Unfortunately Qisahn could not reach the person in charge last week when they wanted to start selling the pre-orders without prior notice and hence the delay. I’m sure this misunderstanding will be cleared up very soon once they discuss it further this week.“

Whether this was a true misunderstanding or a frustrated retailer looking to lash out has yet to be fully revealed.

In a blog post titled “Preorder Diablo III at S$65.90/RM$160“, Qisahn alleged that Asiasoft danced away from communications regarding news about pre-order prices and the inevitable launch party and goodies.

“For the past one week, we tried calling / SMS-ing daily but the manager is either too busy, on leave, in Malaysia or I don’t know, just not responding,” Qisahn said in the blog post.

While details on the exact nature of the ruckus are scarce, what NGNT has pieced together seems to suggest that Qisahn was ready to sell Diablo III below the suggested retail price set by Asiasoft.

Asiasoft, being none too happy about this, have, allegedly, “banned” them from their supply list.

Qisahn.com is now waging war, asking its customers and blog viewers to “use (Qisahn’s) price to muscle a better deal” and suggesting it is going to import the title from distributors elsewhere.

Asiasoft is a big-name distributor in Southeast Asia, having recently clinched the deal to distribute Trion World’s RIFT MMO and hosting a large share of other MMO titles in the region.

Qisahn itself is no slouch, having made a name for itself in Singapore and Malaysia as a solid online company that’s often able to get amazing deals on titles.

That’s not to say Qisahn is not without controversy itself, having only a few short weeks ago admitted to falsely selling Hong Kong PS Vita’s branded as Singapore sets.

We’ve reached out to Asiasoft and Qisahn for comment, and will update the news accordingly.

Qisahn.com admits selling HK PS Vitas as S’pore sets, confirms there will be no local warranty from Sony

Blizzard SG, MY and Thai distribution rights return to Asiasoft

Asiasoft and Trion Worlds partner up to bring RIFT to SEA