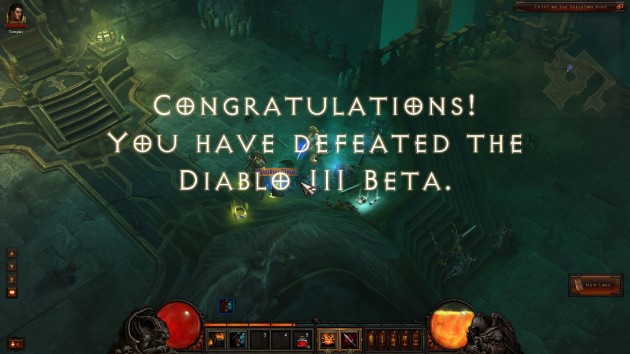 Unable to get hold of a Diablo III beta key for the past few months? Blizzard is giving everybody a one and only chance to try out the D3 beta, which will be made open to all players with a valid Battle.net account over the weekend, according to a post on the official Diablo III blog.

From Saturday, 3.01am onwards, till Tuesday, 1.00am (both Singapore time), players will be able to log-in and play each of the five character classes up to level 13, either solo or with other friends.

The link to download the Diablo III beta client is right here. Those who do not have a Battle.net log-in can create a new account to play the beta here.

Gamers that already possess a closed beta key can continue playing after the free weekend is over, but only until 1 May, whereupon Blizzard will shut down the beta servers in order to prepare for the game’s official 15 May release.

I’ve pasted the full instructions to play the open beta below, taken from the official D3 open beta FAQ, for your viewing convenience:

What steps do I need to take?

Log in or create a Battle.net account at http://www.battle.net
Create your BattleTag™, which is required to play Diablo III (What is BattleTag?)
Download the game client, install, and play between 12:01 p.m. PDT April 20 and 10:00 a.m. PDT April 23

I don’t have a Battle.net account — can I still play?

Absolutely! Just visit http://www.battle.net to create a free Battle.net account. Next, download the client from https://us.battle.net/account/download/index.xml and install it. Create your BattleTag, and then log in to the game using your Battle.net account name (email address) and password to begin slaughtering the demonic hellspawn that dare stand in your way.

Are there any differences for stress test participants versus invited closed beta testers?

Can all regions/countries participate?

Due to regional differences and features of the stress test client, Korean players will not be able to partake in the stress test weekend. However, beginning the week of April 23, we will be conducting a separate, invitation-only closed beta test that will give players in Korea a chance to try out the game, along with players in the regions of Taiwan, Hong Kong, and Macau.
What if the service is down/laggy/disconnecting me?

It’s very possible that players connecting to the stress test could experience issues with the service. While not ideal, this is exactly why we’re having a stress test. We want to catch and analyze as many bugs as possible during this stress test period, so that we can try to ensure a smooth launch on May 15.

I’m having an issue, how can I get help?

Due to the limited window of the stress test we encourage you to visit the Technical Support or Mac Technical Support forums if you’re having any issues running the game, and checking the Known Issues list if you’re running into a bug. As a stress test participant you will not be able to post in the beta forums.
What platforms and languages do you support?

As an invited closed beta tester you’ll continue to have access until the beta ends on May 1.

Guide: Signing up for the StarCraft II open beta