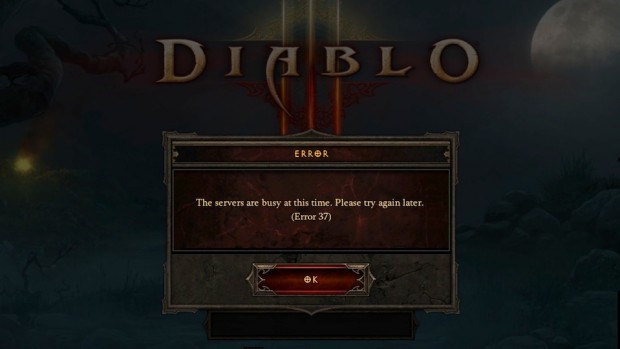 Diablo III aficionados happily clasping their games and rushing home were in for a rude shock, with Blizzard’s servers being predictably overloaded by the millions of players simultaneously attempting to log-in and get their game on.

Many — myself included — have been stuck at the log-in screen with the now notorious “Error 37”. Some other players have reported being able to get all the way to character creation screen before a diabolical error message informs them that “Your request has timed out”.

Blizzard has released a statement on their Facebook page informing players that they are aware of the issue and are working to resolve it, stating:

Welcome to Diablo III! The fight for Sanctuary has begun.

Please note that due to a high volume of traffic, login and character creation may be slower than normal. If you’re unable to login to the game or create characters, please wait and try again. We’ve temporarily taken our Battle.net websites offline and launched more servers to accomodate for the traffic. We hope to resolve these issues as soon as possible and appreciate your patience.

For those trying their luck, reports suggest that the age-old adage of “Just keep hitting the login button till it works” seems to be faring particularly well…

Diablo III beta open to all this weekend only, closed beta will cease 1 May